A boy walks out of the sea while removing oil spilled on Itapuama beach located in the city of Cabo de Santo Agostinho, Pernambuco state, Brazil, on October 21, 2019. (AFP / Leo Malafaia)

Rio de Janeiro — The oil first appeared on the beaches of Brazil’s Paraiba state at the end of August. Since then, it has surfaced in nine states in the northeast, soiling pristine beaches, reefs, mangroves and wildlife in what is proving to be the country’s worst oil spill.

The culprit is still not known, although a Greek-flagged tanker is suspected of causing the catastrophe. To get photos of the disaster, which was affecting areas far from state capitals where most of the press is based, AFP’s Rio de Janeiro bureau found talented local photographers. Here are some of their stories: 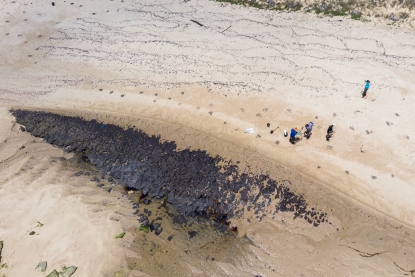 I was born and raised on the coast of the Pernambuco state in Brazil. On October 21, I was taking photos on Itapuama beach. I love this beach, it’s where I first learned how to surf.

One of the pictures that I took was of a local teenager, Everton Miguel dos Anjos, as he emerged from the black water with an oil-stained plastic trash bag across his chest, his face despondent. His mother owned a food stall on the beach and he had come to help clean it up. 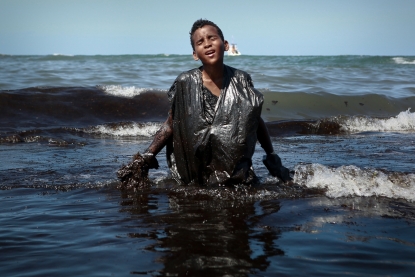 A boy walks out of the sea while removing oil spilled on Itapuama beach located in the city of Cabo de Santo Agostinho, Pernambuco state, Brazil, on October 21, 2019. (AFP / Leo Malafaia)

When the photo chief in Rio told me that my photo had been appearing all over the world, I couldn’t believe it. It went viral, was chosen as one of the best photos of the week in media both in Brazil and internationally, like Britain’s The Guardian, and landed the coveted double-page spreads in others, like France’s Liberation. 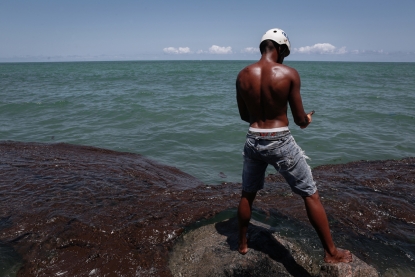 These beaches are an integral part of our identity and it’s sad to see them soiled. I grew up on this coast, my grandfather was a fisherman here. These beaches are a lifeline for hundreds of people, who will feel the effects of this for years to come. To see this happening is revolting. 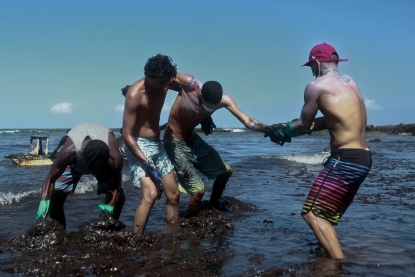 A volunteer is stucked in oil spilled while removing it on Itapuama beach located in the city of Cabo de Santo Agostinho, Pernambuco state, Brazil, on October 21, 2019. (AFP / Leo Malafaia)

The oil gets everywhere. You try to get it off your body, but you can’t. It clings to your skin, to your equipment, to everything. 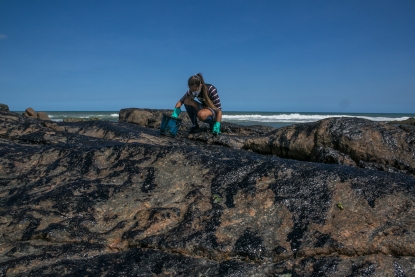 A volunteer cleans oil from rocks at the Pedra do Sal beach, in Salvador, Bahia state, Brazil, on October 19, 2019. (AFP / Antonello Veneri)

I have been in the Bahia region for about 10 years. The first images that I took of the spill were with my smartphone on Pituba beach in Salvador, the capital of Bahia state. I concentrated on the work of the volunteers who were helping with the clean-up efforts. 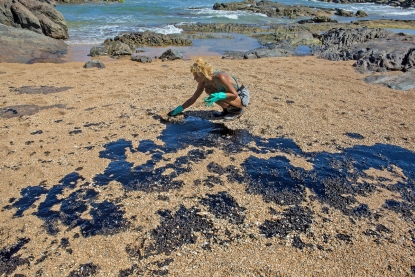 A volunteer cleans oil from the sand on a beach near the resort of Porto of Busca Vida in Lauro de Freitas, Bahia state, Brazil, on November 3, 2019. (AFP / Antonello Veneri)

For most of the Afro-Brazilian religions, this region is sacred. I have spent so much time here and it breaks my heart to see the beaches and its rocks covered with oil. 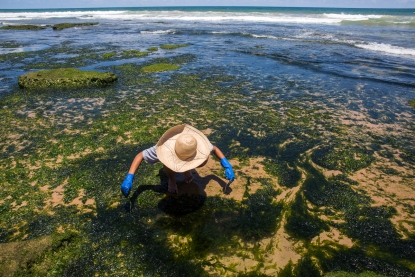 It is a horror and a disaster and I found myself cleaning up the beach as I was taking photos. At first, we didn’t know how to get rid of the oil. We didn’t have any protection, no gloves, no masks, nothing. People were trying to do it with their bare hands and some began to faint and vomit. Eventually, we learned to protect ourselves. 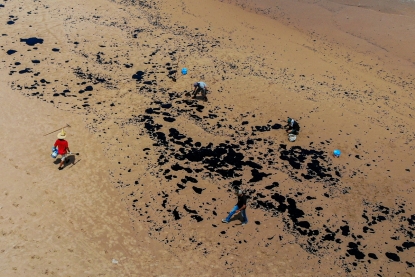 In this aerial view volunteers are seen removing the oil spilled on Jaua beach located in the city of Camacari, Bahia state, Brazil, on October 17, 2019. (AFP / Mateus Morbeck)

Now I carry two bags — one with my camera equipment and a drone and another with oil protection equipment. I have a gas mask, gloves and boots.

I have a feeling that I’m mopping up ice cream. We don’t know who is the enemy and how long it will continue to attack us.

The volunteers created a WhatsApp group to coordinate their efforts and to meet at the place where the oil appears. I have been busy since.

This blog was written with Mauro Pimentel in Rio. 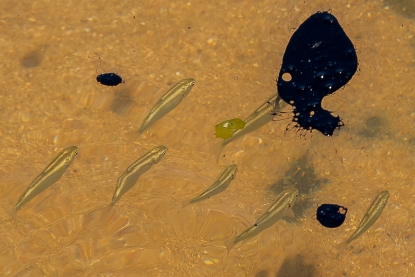 Fish swim next to oil spilled on the waters of Pedra do Sal beach located in the city of Salvador, Bahia state, Brazil, on October 18, 2019. (AFP / Mateus Morbeck)
Next post

Before, during and after the fall of Berlin Wall