As Americans rolled into town

Paris -- You didn’t need to look far to see what made the US team stand out during the women’s football World Cup that finished last weekend. You could just show up at an event as routine as a press conference.

Like the improvised one the US team gave ahead of the final that they ended up winning in Lyon, as they got off the bus. Star forward Megan Rapinoe, sporting black sunglasses, turned it into a discussion on US values.

“I think this country was founded on a lot of gread ideals but it was also founded on slavery,” the 34-year-old co-captain, her normally platinum hair colored violet for the tournament told reporters. “And I think we need to be really honest about that and be really open on talking about that so we can reconcile that and hopefully move forward and make this country better for everyone.” 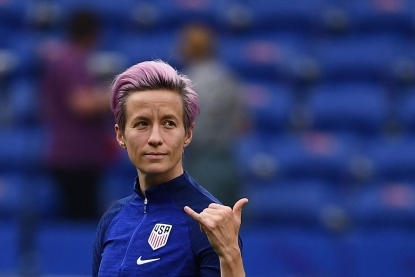 Megan Rapinoe ahead of the semifinal between the US and England, Lyon, July 2, 2019. (AFP / Franck Fife)

For French reporters like me her comments were like a gust of wind blowing through what is usually quite a staid affair. Press conferences by the French national teams, both women and men, are tightly controlled. You’d never have one in front of a team bus. They are held in a proper room, with the coaches and players issuing lacklustre statements. Every once in awhile you’ll have a genuine moment, but most of the time we leave sighing. And here we not only had plenty of material on football, but a political story to boot! 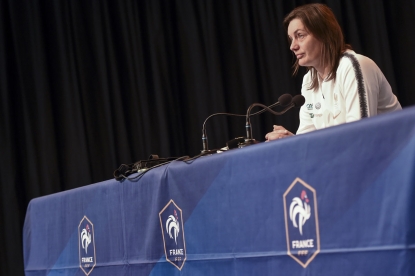 France's head coach Corinne Diacre talks to the press during a press conference in Perros-Guirec, western France, on May 8, 2019. (AFP / Sebastien Salom-gomis) 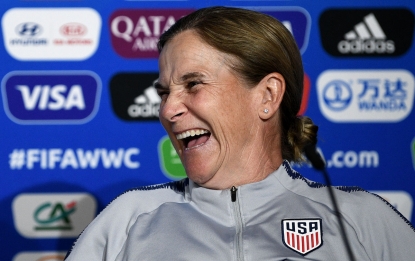 United States' head coach Jill Ellis laughs during a press conference on July 6, 2019, a day before the US played the final against the Netherlands. (AFP / Franck Fife)

Throughout the tournament the US team, led by Rapinoe, had not only been fighting on the field for their record fourth World Cup title. Off the field, they were leading a fight for the several social issues that they champion.

The fight has not been without controversy. Rapinoe stirred debate when an interview that she gave in January surfaced, in which she said that she wouldn’t go to the “f-n White House” if the team won the title because President Donald Trump did not represent the values the team held dear. She apologized for the profanity, but reiterated that she would not come to the White House in protest. She is not the first star athlete to decline to meet the current US president and plenty of American presidents, from George Bush Sr to Barack Obama had star athletes decline to meet them at the White House for both political and personal reasons. But in France for a top player to dis the head of state like that? It’s just not done. 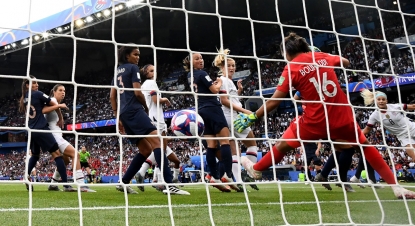 She and the rest of the team have enthusiastically promoted gay rights. Rapinoe is gay and proud, as are several other players on the team (two of them, Ashlyn Harris and Ali Krieger, are engaged to be married).

Americans may be used to their athletes speaking out on social issues -- boxing great Muhammad Ali couldn’t fight for three years because of his refusal to be inducted into the US armed forces over opposition to the Vietnam war in the late 1960s; sprinters Tommi Smith and John Carlos caused global outrage when they raised their arms, fists clenched in a Black Power salute, as the American anthem played during their 1968 Olympic medal ceremony in protest over treatment of black Americans; basketball star Magic Johnson became an ardent fighter against AIDS, helping to dispel stereotypes that it was a “gay disease” after being diagnosed HIV positive ahead of the 1991-92 NBA season.

But in France, we don’t have this culture of star athletes being ambassadors for social change, so it jumps out at us. The only woman football player to have publicly confirm that she was gay was Marinette Pichon and she has been retired for several years. Whether athletes are gay is just not a subject that we address here. We reporters don’t ask because we consider this a matter of privacy. It’s not in the French media culture to probe people on personal matters like these. And I suppose the players don’t say because there is still a lot of stigma and prejudice associated with it.

Another issue was gender equality. Rapinoe didn’t hesitate to address the topic any chance she could, as did the other players. Again, the Americans have a history of this -- tennis star Billie Jean King campaigned for equal prize money for men and women from the start of the open era, in 1968 and, having won the US Open in 1972 but receiving 15,000 dollars less than the male champion, she said she would not play the tournament the following year unless the prize money was equal (it was and she did, but was eliminated in the third round).

The US team sued their employer, the US Soccer Federation, in March, saying the discrepancy in pay compared to the men’s team amounted to gender discrimination, especially when one considers that the women’s team had won three World Cups ahead of this year’s contest and the men’s team has won zero and didn’t even qualify for last year’s World Cup.

They are not the only ones to push the issue -- Norway star player Ada Hegerberg did not play for her home team in the World Cup in protest of what she said was unfair treatment of the women’s team compared to the men’s. But Hegerberg was one player -- when you have an entire team like the US pushing the issue, it becomes amplified. And so at the end of the final on July 7, as the American team celebrated its 2-0 win over the Netherlands for a record fourth World Cup, chants of “U.S.A.!” intermingled with “Equal pay!” 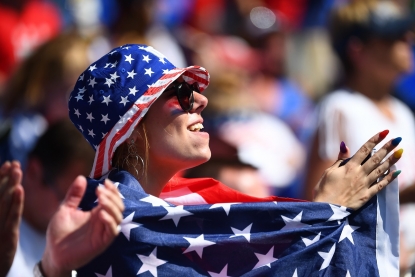 USA fans cheer prior to the France 2019 Womens World Cup football final match between USA and the Netherlands, on July 7, 2019, at the Lyon Stadium in Lyon, central-eastern France. (AFP / Franck Fife)

In contrast, the French women’s team has taken a much softer stance, with several players advocating that more resources like sponsors be allocated to the women’s game. “The subject of salaries is a complicated one,” midfielder Gaetane Thiney said during the Cup. “If our games earned as much as the men’s, I wouldn’t have a problem with us being paid the same. If we do the math, I’m not sure that France’s women’s team earns as much as the men…. The salaries are what they are. The conditions that we operate in on a daily basis are top. We are not here to negotiate with the federation, we are part of the same family. The federation gives us the best. The president (of the federation) is always very fair with us.” 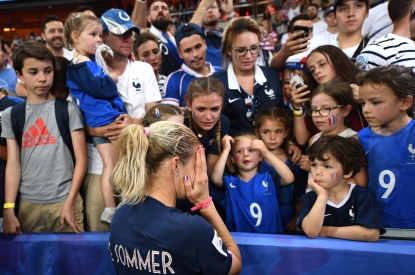 France's forward Eugenie Le Sommer reacts next to her fans at the end the France 2019 Women's World Cup quarter-final football match between France and United States, on June 28, 2019, at the Parc des Princes stadium in Paris. (AFP / Franck Fife)

But it wasn’t only the activism that made the US team stand out. The players were just more relaxed and more accessible than what we’re used to in France.

They often laughed during press conferences. When they checked out stadiums ahead of games they often went barefoot and broke out in impromptu dance moves as they did so. I’ve never seen that kind of spontaneity among the French players. 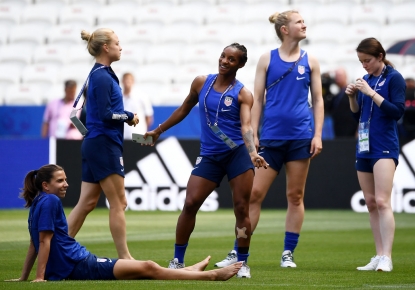 United States' defender Crystal Dunn (C-L), flanked by her teammates, dances in the pitch during training for the France 2019 Women's World Cup at the Groupama stadium in Lyon, on June 30, 2019. (AFP / Franck Fife)

In Lyon, a clerk at the Printemps department store told me that the US players had come in the day before to stock on up Dior and Prada essentials. A few days ahead of the final, I ran into a smiling Rapinoe at the bar at the Hotel Metropole in Lyon, as her teammates left the pool in bathrobes, laughing. It would be unthinkable to simply run into French players like that, at a store or at the hotel. Access to them is strictly controlled, especially ahead of a key game like the World Cup final!

The US team seemed to feed off the fans and journalists. Even before huge matches like the final, they welcomed reporters’ questions and gladly posed for selfies with fans. Which is another odd sensation for French reporters, who are used to being kept at a distance by their teams and where the philosophy is that the team needs to be secluded in order to work. Like when French goalkeeper Sarah Bouhaddi told us that she was happy to go to the team’s training base ahead of the quarter-final matchup with the US. “The advantage for us is that we are home, so we have our training facilities here. We can work in peace, without journalists, without fans. We can be in our own bubble and just concentrate on ourselves.” 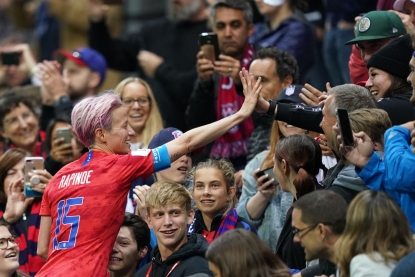 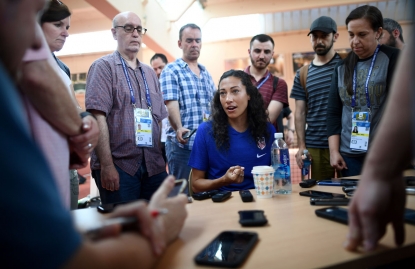 During the post-final press conference US coach Jill Ellis got a phone call. “It must be my mom,” she joked before glancing at the phone. “Oh yes, indeed,” she laughed when she saw who was calling. “Sorry mom, I can’t answer right now.” It was like she was talking to us over a drink instead of at a presser following a record win.

And once Rapinoe arrived, she of course took up the team’s mantra. “Everyone is kind of asking what’s next and what we want to come of all of this and it’s to stop having the conversation about equal pay,” she said. “What are we going to do about it? It’s time to sit down with everyone and get to work.”

We reporters scribbled -- for once, we had something more than just the joy of a win to write about. 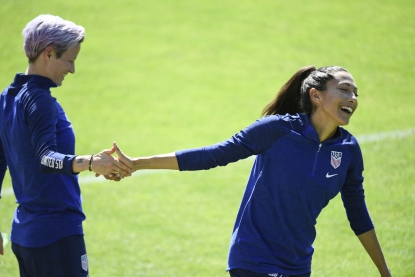 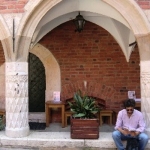 Sports journalist based in Paris
All posts
Next post