A miner caught in the May 13, 2014 blast in Soma, western Turkey, is reunited with his father (AFP Photo / Bulent Kilic)

This is part of a year-end photo series spotlighting images of beauty or hope, taken in times of war, crisis and upheaval.

ISTANBUL, December 31, 2014 – These two faces tell the story of Turkey’s deadliest-ever industrial disaster. That of a miner, his stunned eyes shining out from a blackened face, full of terror at the death he just escaped. And that of a father, half-crazed with worry, embracing him and his miraculous return to the world of the living.

When I arrived outside the mine in Soma, on May 13, 2014, most of the accident’s 301 victims were likely already dead – trapped deep beneath our feet.

Early that afternoon, a blast had rocked the coal seam where they had just begun their shift – spewing poisonous gas out into its dilapidated galleries. 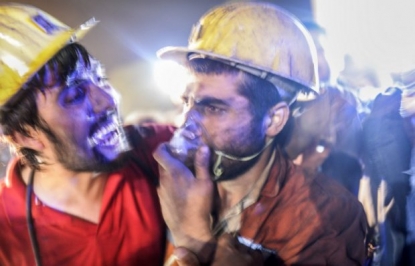 A miner celebrates seeing his friend emerge alive after the Soma mine blast on May 13, 2014 (AFP Photo / Bulent Kilic)

When I first learned of the accident, I was in the Izmir region with an AFP team from Istanbul, for a report on ‘halal’ tourism. Tuning into the radio that afternoon, we heard by chance that several hundred miners were caught underground in a coal mine in Soma, some 200 kilometres (120 miles) away.

We set off right away for the small town in western Turkey, without knowing what we would find when we got there. Three hours’ drive later, we started to realise the scale of the disaster. From the outskirts of Soma, the dusk was lit up by the blue glow of ambulances heading to the mine from the area’s hospitals.

We wedged our way into the dense line of traffic on the road snaking up to the mine, as hundreds, if not thousands, of residents, went in search of news of a brother, a son or a father. 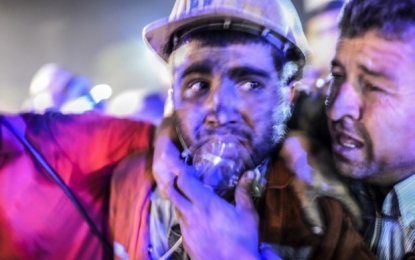 When we finally pulled up in front of the police cordon, the scene unfolding under the floodlights set up by rescue teams was one of utter chaos.

Shocked miners, half-choking and spitting black saliva, being carried by their workmates. Ambulances loading up the sick, one after the after.

And in the darkness all around, despite the gendarmes’ best attempts at order, families pressing right up to the mine entrance in the hope of seeing, touching, embracing, one of their own among the survivors. 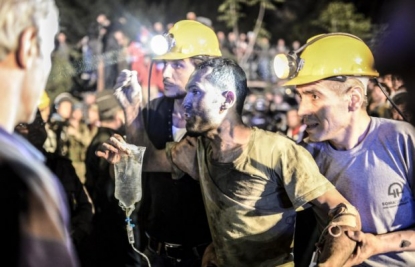 Some elbowed past medics and yanked off oxygen masks to reveal the face beneath.

Others sat a little way back, on wooden pallets, hoping to find their name on a list of those hospitalised. At regular intervals, a cry of pain pierced the hum of the generators, as another family learned the death of a loved one.

So it was amid this unspeakable chaos that I took this shot of a staggering miner, one among many others. His father’s embrace lasted a mere second. By the time his mother arrived, rescuers had already bundled him into an ambulance.

The survivor just managed to ask after his workmates still trapped below ground, before leaving for hospital. He would never hear from them again. 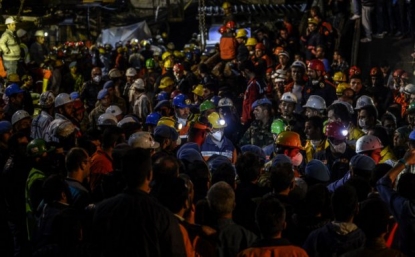 Rescuers and miners carry out dead bodies on May 15, 2014 two days after the coal mine explosion in Soma (AFP Photo / Bulent Kilic)

For the five days following the disaster, rescuers brought up only dead bodies. In all, 301 perished, out of the more than 700 who were underground at the time of the explosion. The worst mining accident in Turkey’s history.

The surge of anger and emotion sparked by the tragedy forced the government to pass emergency legislation supposed to improve miner working conditions. Not enough, apparently. In October, 18 died in yet another accident in Turkey’s coal mines.

Bulent Kilic is an AFP photojournalist based in Istanbul. He was agency photographer of 2014 by both Time magazine and The Guardian for his work over the period, notably in Turkey, Ukraine and Syria. 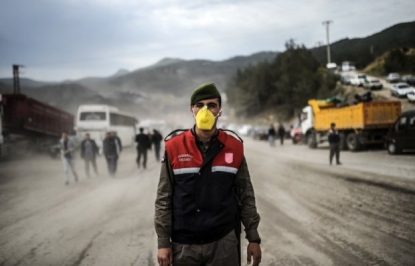 AFP's award-winning chief photographer in Turkey, based in Istanbul.
All posts
Next post

Beauty out of chaos

The slap of forgiveness