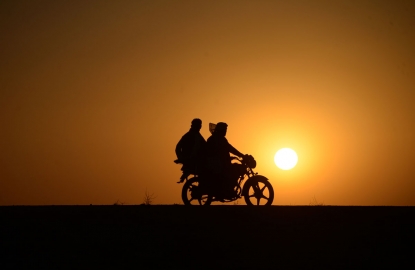 "Several weeks before finishing my posting as Kabul bureau chief, I had a dream that olive oil could be the unlikely panacea for my insomnia," writes Allison Jackson, who has just finished a year and a half posting to Kabul.

"In the dream I walked into an organic supermarket in the Afghan capital’s heavily fortified green zone – imagine a minimalist version of a Whole Foods Market outlet, but surrounded by concrete blast walls and razor wire."

"A senior UN official chopping up kale shared the olive oil remedy for my chronic sleeplessness."

"But at least, for once, I hadn’t been dreaming about a suicide attack."

"Shah Marai loved to tell dirty jokes. His piercing blue-green eyes would twinkle mischievously as he shared his latest gag. Even before he reached the punchline he would be laughing," writes Kabul bureau chief Allison Jackson in a tribute to AFP's chief photographer, a week after he was killed in a suicide blast in the Afghan capital.