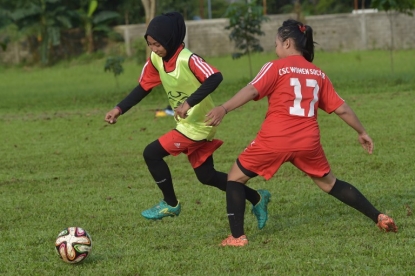 L) dribbles the ball past Yulita Cyndi Anggraini at a training session of the CSC soccer club in Jakarta on March 26, 2015 (AFP Photo / Adek Berry

"The girls emerged one by one from the changing room, in red jerseys with numbers on their backs. But instead of jogging out to the football field, they ducked into a small mosque for afternoon prayers," writes the photographer Adek Berry. "When AFP asked me to shoot a reportage on female football in Indonesia, I jumped at the chance. But women footballers are no common sight in the world’s largest Muslim-majority nation."