Kingston-upon-Hull - I guess one of the strangest things was when naked blue people started to emerge from behind the trees, just as it was beginning to get light out, around 5:00 am. They just kept coming and coming. 3,200 people, in the dawn light. All naked. And all painted blue.

Although I knew the nakedness was coming, it still made quite an impression. 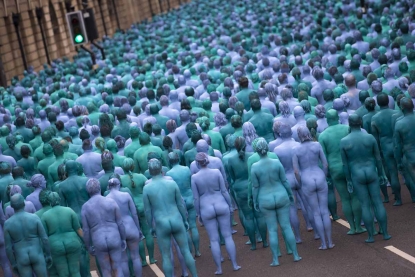 When AFP called to see if I would cover the latest project by New York-based photographer Spencer Tunick, I jumped at the chance.

Tunick specialises in creating images of nude people in public settings. He has photographed thousands of nude people filling a square in Mexico City; in front of the Sydney Opera House, a jetty in Ireland, a street in Cleveland Ohio. Just to name a few. The city of Hull, in Yorkshire, England, had invited him to stage an installation as part of its “UK City of Culture 2017.”

And that’s how I found myself on the top of a double-decker bus in darkened Hull, yawning and making small talk with the other six photographers and six camera crews accredited to shoot the event. We all got to the city around 3:30 am. They wanted to do the installation early in the morning, before the city woke up and people filled the streets.

The press people met us and ushered us onto an open top bus. The bus was driven up the road and parked sideways, so that we could get a view, near a park area where the volunteers had gathered to be painted blue. We waited for about three-quarters for an hour and then heard muffled instructions being given over a loudspeaker. And then the naked blue people started to emerge.

They kept coming and coming and eventually they filled up the whole roundabout area. You could tell it was a jolly mood, they were chatting, laughing. None seemed self-conscious about the fact that they were naked, painted blue and standing in public city space. But I suppose if you volunteer for something like this, you’re not going to feel self-conscious once the time comes. After a while Tunick came over and addressed them, telling some to face toward him and some away from him. He was taking his pictures from a much higher angle than we were, from a crane, and from different angles.

When he finished with that setup, he had the people move down the street, to shoot some images with a Victorian building in the background. He also did one on a bridge and in a park.

I really can’t wait to see his pictures -- they’re going to be unveiled next year by the Ferens Art Gallery that commissioned the work -- because I bet they’ll be beautiful, absolutely fantastic. He had completely different angles from us and I bet they’re going to be out of this world. Especially the one in front of the Victorian building -- he basically had this huge crowd of naked blue people, with this amazing building in the background.

It just looked incredible, absolutely amazing. It’s one of those things that are hard to describe. It’s something you’ve likely to never see again. The blue paint symbolised water and came from the theme of the installation -- the Sea of Hull. The whole thing was a bit surreal of course. You have 3,200 naked blue people walking through a town. I just can’t emphasise how truly odd and weird it looked.

Of course you had all shapes and sizes. And everyone in a jolly good mood. I guess you wouldn’t sign up for something like that unless you were happy to do it. When they changed position and our bus drove alongside them, some of them would shout up to us ‘Hey what are you looking at?’

The funny thing is how quickly the ‘odd’ became normal. Very quickly, Tunick’s assitants looked out of place and ‘abnormal’ because they had clothes on. The whole thing was superbly organised. I guess they have had so much experience with his various work all over the world, that they have it down pat by now. They were also quite careful with the security of it. Every once in awhile you had a bystander who came along trying to take a picture with his mobile phone and security was on them right away.

I guess the whole thing was most startling to those people, the passersby. Can you imagine? You’re stumbling home after a late night, probably still a bit happy from the drink, and you come upon a crowd of naked blue people in the town square? 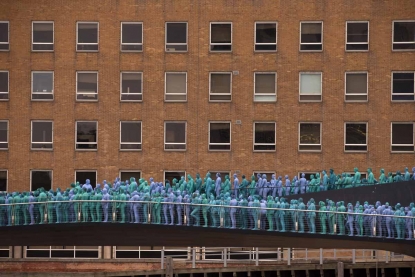 It was also interesting just how different the pictures of the six photographers on top of the bus were. There we were, shooting the same thing from the same place. Yet the photos we produced were different. Of course, sometimes you’re going to get the same picture. But it’s interesting just how different the images can be, from one photographer to the next. It really highlights the artistic side of photography, the importance of “the eye.” I can be standing next to another photographer, but the way we see the scene in front of us is totally different. 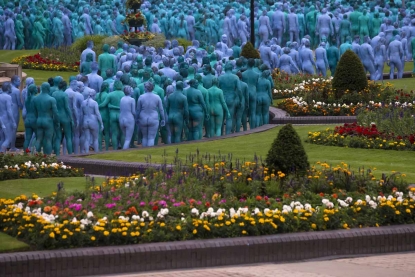 One of the most striking things during the assignment came during one setup, when all of the volunteers were standing up and he asked everyone to lie down. 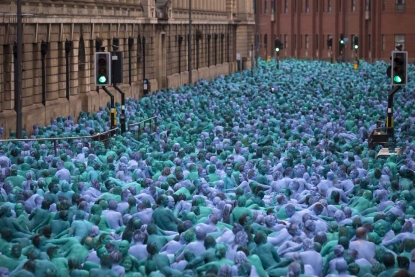 And as they lay down, the uniformity of the scene just shattered and it turned into almost this writhing mass getting down on the ground. And the same when they stood up again. It was an incredible sight, really striking -- the uniformity of these 3,200 people painted blue broke up for a moment and then came together again. 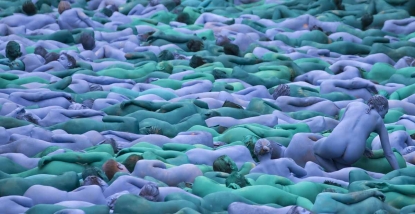 Another strange thing was afterward, when the whole thing was over and the naked blue people were back in their clothes. At one stage, I saw two ladies, probably in their 50s or 60s -- conservatively dressed and very respectable-looking -- crossing the street behind us. All very normal except they were painted blue and you realised they were stark naked just a little while ago. 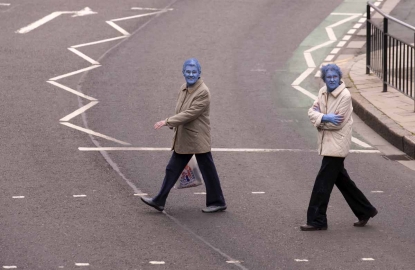 After the party. (AFP / Jon Super)

Or a man painted blue smoking... 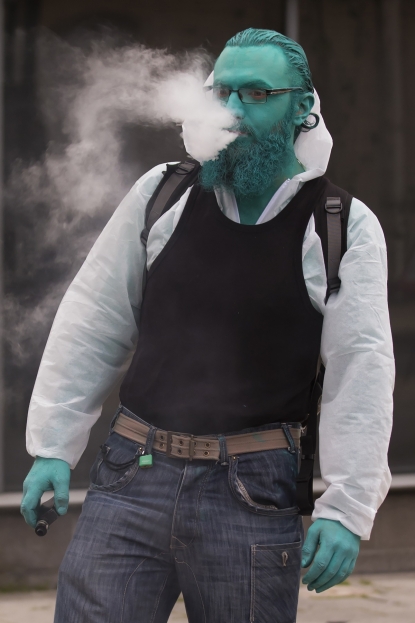 After the party. (AFP / Jon Super)

Or one wearing a cardboard box… as you do. 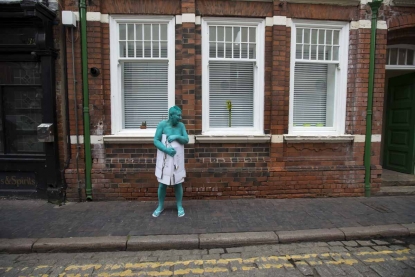 I’ve done this job for almost 20 years and I’ve never seen anything like this. Once in a while, you see something in your life and you think ‘I’ll never forget it because it’s so completely different to our normal everyday life.’ And that’s what this was. It was an awesome sight, it really was.

I’m lucky to have been asked to do it and it was one of the most amazing jobs that I’ve ever done. 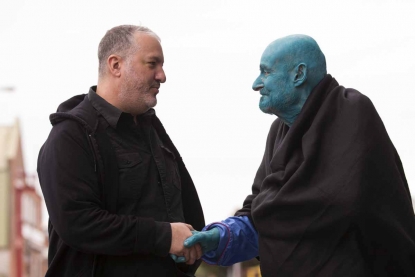 80-year-old Stephane Janssen, an art collector from Belgium who has participated in 20 of Tunick's projects, shakes the artist's hand. (AFP / Jon Super) 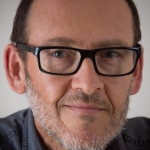 Freelance photographer based in Manchester.
All posts
Next post

Where even the rain is timed