KUGLUKTUK (Canada), September 22, 2015 - It's the flagship of the Canadian Coast Guard fleet and acts as a floating laboratory at the forefront of research on global warming: the CCGS Amundsen travels the Canadian Arctic every summer to measure the progression of warming. This year I've been invited to join scientists and report on their work.

North of the Arctic Circle, the rise in temperature is more pronounced than elsewhere in the world. The average is already up three degrees Celsius above pre-industrial temperatures (compared to +0.8 percent globally), and is rising. Ahead of a December climate summit in Paris, a trip aboard the 98-metre icebreaker through the Northwest Passage presents a wonderful opportunity to ascertain the rapid change at the top of the world. It's also a rare opportunity to rub shoulders with the best climate scientists and witness first-hand what they see in this remote region. It's thanks to ArcticNet, which brings together 150 researchers and 1,000 graduate students to study the impacts of climate change, and every year mounts an expedition to the far North to gather data.

We depart from Kugluktuk, a hamlet at the East entrance of the Passage that links the Atlantic and Pacific Oceans.

Although the temperature this September is hovering around zero degrees Celsius and there is a light snowfall, make no mistake: winter is late this year and locals who rely on ice formation to hunt are unhappy. Inuit elders in this tiny hamlet are quick to share their experiences with warming: stronger North winds, delayed seasonal ice formation, thawing permafrost, the arrival of migratory birds that normally stick to more southern parts, and the loss of native plants. The Arctic is undergoing dramatic change and these old men who grew up in igloos have witnessed it. 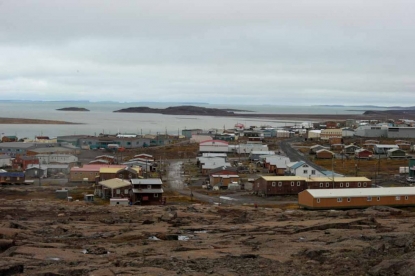 Once cut off from the rest of the world, Kugluktuk has become a hotspot of late. Two cruise ships passed by 10 days ago and two oil tankers are currently moored in the bay, alongside the Canadian Coast Guard vessels the Terry Fox and the Louis Saint-Laurent, both back from a mapping expedition to the North Pole. The data will be used to assert Canadian sovereignty over an expansive Arctic archipelago and surrounding waters, amid overlapping claims by Denmark, Finland, Iceland, Norway, Russia, Sweden and the United States.

The melting polar ice cap has given rise to shipping and naval exploration in these waters. But Canada does not yet have a deep water port in the Arctic (there are plans for one at a Canadian base in Nanisivik on Baffin Island). And so I must fly aboard a helicopter to reach the Amundsen. I head to the ship with five researchers, who are jovial despite the serious nature of their work. Seated in the aircraft, my mind wanders to the undersea documentaries made by Jacques Cousteau and the Wes Anderson film "The Life Aquatic with Steve Zissou," which was both a parody and an homage to the French explorer. In addition to a crew of 40, there are dozens of researchers onboard from Canada, China, France, New Zealand and the United States -- all gathered here for a glimpse of what's to come for the rest of the world as temperatures continue to rise. Their agenda is chalk full. The moment we land on deck the Amundsen sets sail for Cambridge Bay, then north to Resolute Bay, where I will disembark after a two-week journey at sea, and beyond. Adding to the enchantment of the moment, night is falling on this Saturday and we're treated to a spectacular view of the Aurora Borealis (Northern Lights) from the rear deck as a glacial wind blows. The Arctic is just beginning to show us its splendor.

Clément Sabourin is an AFP reporter based in Montreal. Follow him on Twitter. This article was translated to English by Michel Comte in Montreal (read the original version in French). 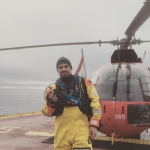 A long walk to freedom

Working in a town turned into a cemetery