Sanaa -- Every day when I leave the house, I say goodbye to my family as if it is the last time I am seeing them. Because it very well could be.

I live in Sanaa, the capital of Yemen -- a land of deserts, mountains and tribes that has been wracked by war, malnutrition and disease so much that the UN has declared it the scene of the worst humanitarian disaster in the world. That’s because the past handful of years has seen a dizzying maelstrom of regional and local groups fighting each other. And we -- the people who live here -- are caught in the middle. 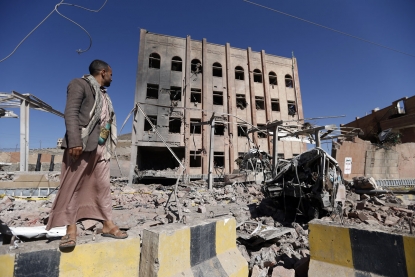 A man stands next to the Yemeni criminal investigations unit in the capital Sanaa on February 5, 2018, a day after the building was hit in an air raid. (AFP / Mohammed Huwais)

Yemen has had its problems for years, but I suppose the descent into the abyss began in 2014. That’s when Houthi rebels overran much of the country, including the capital Sanaa, where I live.

The Houthis were Shiites backed by Iran, an arch-rival of Sunni Saudi Arabia. So a year later, the Saudis assembled a coalition and started a campaign of air strikes to chase the Houthis out. They also set up a blockade of air and sea ports, which has meant that aid groups haven’t been able to bring aid into the country, which was already one of the world’s poorest.

Spicing up the mix of these two regional behemoths fighting for influence, you have some Al-Qaeda groups that have set up camp in parts of the country. And if that wasn’t enough, a few weeks back, you had separatists running the government out of Aden, the port city where it has had its base since being chased out of Sanaa by the Houthis. Yemeni fighters loyal to the government backed by the Saudi-led coalition fighting in the country ride in the back of a pickup truck with mounted heavy machine gun while closing in on a suspected location of an Al-Qaeda in the Arabian Peninsula (AQAP) leader during their the offensive in the Mesini Valley in the vast province of Hadramawt on February 21, 2018. (AFP / Saleh Al-obeidi)

What is it like for ordinary people to live in such circumstances? When I go out in the morning, I expect death. I cannot go out of my house after 9:00 pm because it’s too dangerous.

When fire erupts in neighborhoods, the children start to scream. Their parents, terrified that there will be an airstrike, grab them and rush downstairs of their buildings, either to the first or ground floors.

When you get caught in clashes like the government and Houthis in Sanaa or government and separatists in Aden, civilians are left without water, or power, or any way to get food. They can’t get to hospitals. They cower in their buildings, terrified to go out because they are not sure who is allied with whom outside. 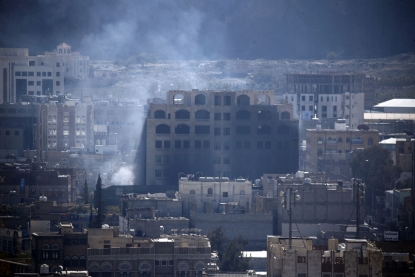 Smoke billows behind a building in the Yemeni capital Sanaa on December 3, 2017, during clashes between Huthi rebels and supporters of Yemeni ex-president Ali Abdullah Saleh. (AFP / Mohammed Huwais)

Or there are the random acts of death, like an air strike that can hit anyplace, even a funeral hall, like the one in October 2016 that killed 140 people and wounded 500 others. Since the start of the Saudi-led campaign, more than 9,000 people have died in the country.

If that wasn’t enough misery, you have the humanitarian situation. Since the Saudi coalition imposed a blockade of air and sea ports in 2015, aid has been slow to trickle into the country. Which has led to malnutrition. There are people starving in parts of Yemen. 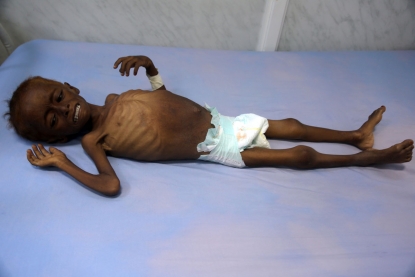 A malnourished Yemeni child receives treatment at a hospital in the Yemeni port city of Hodeidah on December 3, 2017. (AFP / Abdo Hyder)

And that’s when the cholera came. There are now more than a million cases of cholera in the country and some 2,200 people dead of the disease. That’s one of the world’s worst epidemics of the past decade.

The disease spreads because of the severe economic situation and also because of a lack of education among many people. 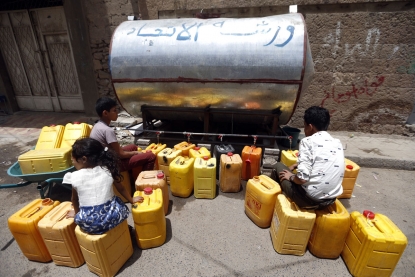 I once knew a family. One of their kids got sick, but they didn’t realize that he had cholera, they just thought he was sick, so they didn’t take him to the hospital and then he died.

Then there are people who realize that their children have cholera, but they can’t them to the hospital because they just can’t reach it.

I always remind my family to keep a lookout for the signs of the disease.

The conflict in Yemen will end sooner or later. Because a start always has an end. Though there are people who think it will go on forever. I just wonder how many people will have to suffer and die before it does.

This blog was written with Mohamad Ali Harissi in Dubai and Yana Dlugy in Paris. 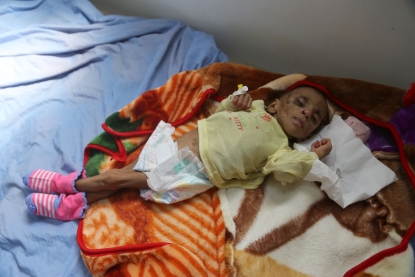 A malnourished Yemeni child receives treatment at a hospital in the Yemeni port city of Hodeidah on December 19, 2017. (AFP / Abdo Hyder)

Journalist based in Sanaa.
All posts 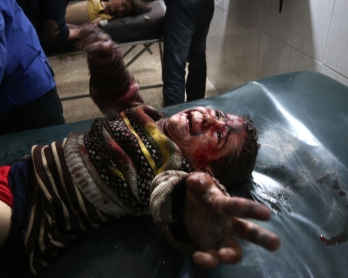 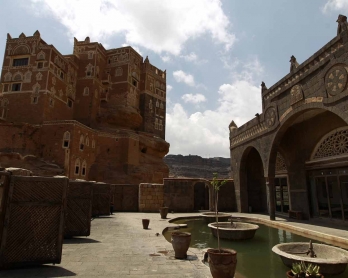 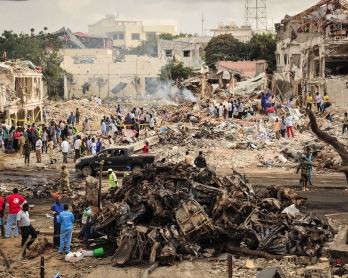