Paris -- It was while I was crawling on all fours through a dusty tunnel, pushing my backpack in front of me, that I began to have some doubts about the allure of the forbidden side of the Paris catacombs. We had been crawling like this for some time and there was no end in sight. My friend knew what he was doing, he’d been at it for decades, but still, what if we took a wrong turn? 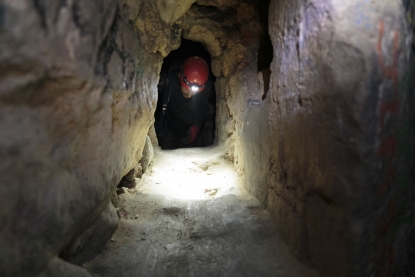 Exploring the closed parts of the Paris catacombs means sometimes crawling on all fours for several hundred meters in places like this. (AFP / Geoffroy Van Der Hasselt)

The Paris catacombs are a dark labyrinth of tunnels and caves stretching a few meters below the streets of the City of Light. The part open to the public is among the city’s most popular landmarks -- lines to get inside can be as long as for the Eiffel Tower. But this part is just the tip of the iceberg. 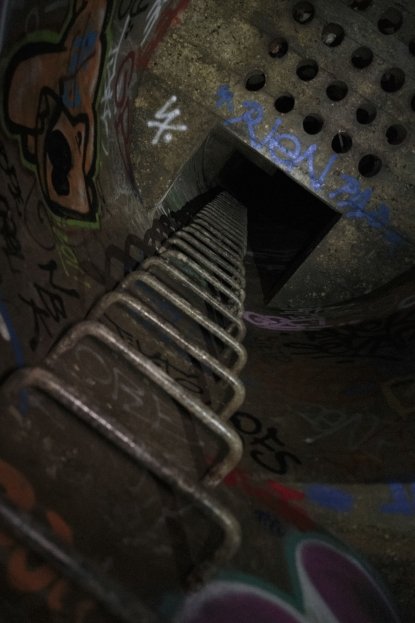 The way in and out. (AFP / Geoffroy Van Der Hasselt)

There is a myriad of other passages -- reportedly up to 300 kilometers -- that twist and turn beneath the French capital, some reaching all the way into the suburbs. Officially they are off-limits. In reality, they receive a steady, small stream of covert visitors, the so-called cataphiles. I guess you can call it the city’s underground scene. That’s literally under the ground.

One of them is my friend Pascal, a 36-year-old Paris native who has been exploring this forbidden world for some 20 years. He first went in at age of 15. He had some older friends who used to go down into the tunnels and they took him along. He’s been hooked ever since. When I told him that I would like to photograph this hidden world, he readily offered to act as my guide.

The catacombs, which lie beneath the city’s Left Bank, are remnants of what used to be Paris’s ancient quarries, the source of the limestone that built some of its most famous landmarks, like the Louvre and the Notre Dame Cathedral. Eventually these quarries were formed into tunnels that became ossuaries, repositories for bones of the city’s deceased residents. Eventually, the bones of millions of people from cemeteries up above were transferred here so Paris could have more space to expand. (They reportedly include such luminaries as Charles Perrault, the man who brought the world the Cinderella, Sleeping Beauty and Little Red Riding Hood fairy tales.).

The last bone transfer took place in 1859, when Georges-Eugene Haussman was re-designing the French capital, laying down the wide avenues and the ubiquitous apartment blocks that the city is known for today.

The spooky tunnels and caverns have always attracted curious visitors, from nobility to students and they continue to do so today. There are dozens of clandestine entry points throughout Paris, some easily accessible, others more so. We went in through a manhole cover. 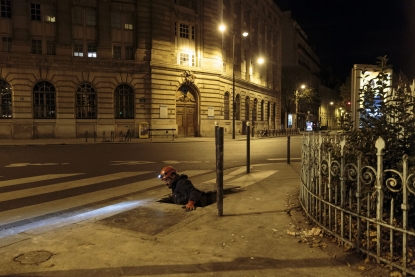 Proper equipment is essential for a descent -- waterproof boots, a helmet with a headlamp and clothes that you don’t mind getting dirty. 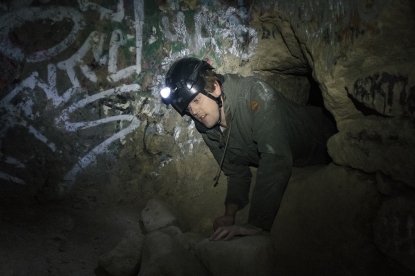 The author finally makes it out of a tunnel. (Photo courtesy of Geoffroy Van Der Hasselt)

Some of the passages are proper tunnels, through which a tall guy like me (1.95 meters, 6’3 feet) can walk upright with no problem. Others are a claustrophobic’s nightmare -- crawl spaces where you have to make your way on all fours for several hundred meters at a stretch.

And which is where I began to have some doubts about the whole idea.

But adventure comes with a price, so I crawled on, confident that Pascal will lead me out.

An essential part of equipment is a map. There is no one map of the catacombs. Every cataphile group tends to have its own. Some are paper, others you can download on your smartphone. 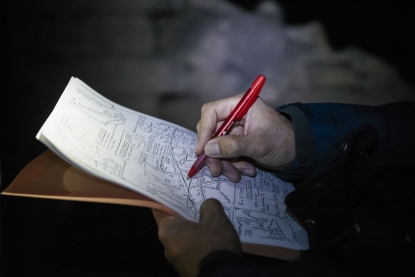 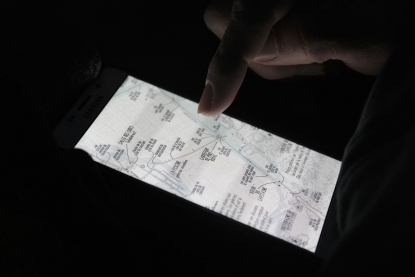 But a map is essential, because without one, you can quickly get lost in the maze. The most famous person to have done so is Philibert Aspairt, a doorkeeper of the Val-de-Grace hospital during the French revolution. He went into the catacombs through an entrance at the hospital, reportedly to get some alcohol out of a cellar and never came back. His body was found 11 years later and buried on the same spot. Today he is a catacomb legend and a cautionary tale. 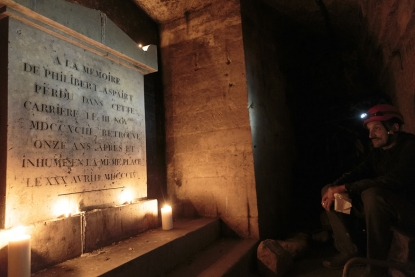 A memorial plaque to the most famous missing person of the Paris catacombs, Philibert Aspairt, a doorkeeper of a hospital during the French revolution. He went into the catacombs reportedly to get alcohol out of a cellar and never came back. His body was found 11 years later and buried on the same spot. (AFP / Geoffroy Van Der Hasselt)

The cataphiles tend to fall into two categories -- those seriously hooked like Pascal and who go down on a regular basis to explore and map new passages and caverns, and occasional users who go down to enjoy an evening with friends in a grotto with some candlelight and a few bottles of wine. And of course sometimes they overlap. 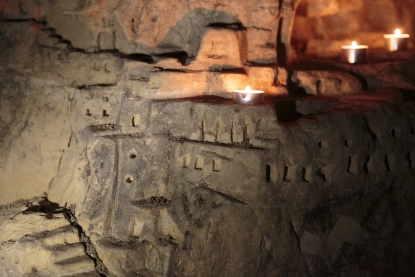 Pascal is a professional tour guide -- he takes tourists around Paris, so for him the thrill is the history of it all.

He gets a kick when he discovers a new tunnel or a grotto. He can tell you when you’re walking below a certain landmark up above, or if a particular tunnel is from the 17th century. 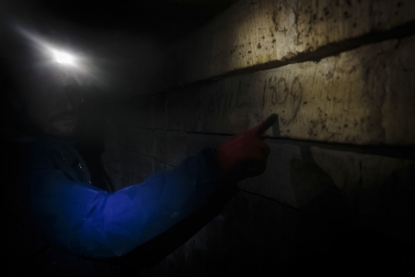 A date on one of the walls of the catacombs. (AFP / Geoffroy Van Der Hasselt)

After a few hours, despite the tunnel crawling, I could see the attraction of it all. The thing that hit me the most was the silence. Just a few meters below the honking cars and the speeding motorbikes of Paris, there is complete silence. The temperature is a steady 15 degrees Celsius. Above is one of the most visited cities in the world. Below there is just you, your friends and a partly uncharted underworld.

There are some ‘street signs’ indicating where you are (these usually correspond to the streets above). 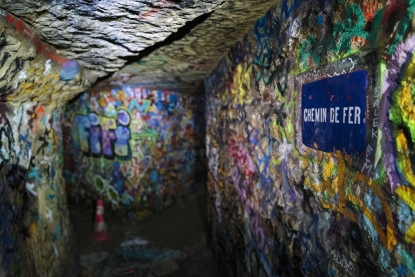 There iis both wall art and graffiti. 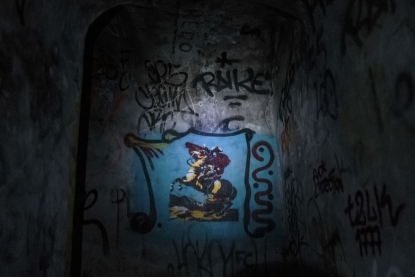 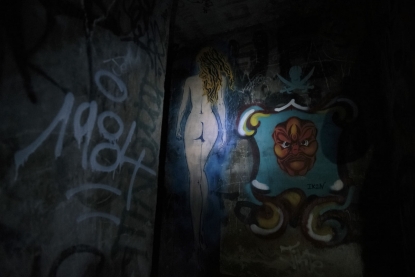 There are odd things that people have left lying around, like a few bikes (though why anyone would want to bring it down there is beyond me) and stuffed animals.

The cataphiles that I ran into were all very conscious of security. The catacombs can sound romantic, but they are dangerous as well. One of Pascal’s friends once went in by himself and stumbled on two guys who had the misfortune of both having broken their legs. So he dragged them out of there by himself and when they were above ground, called an ambulance. 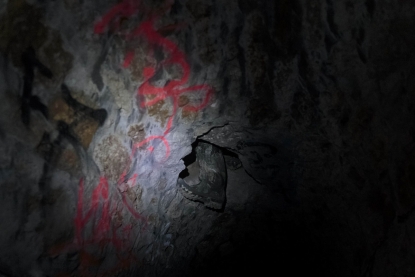 A good way to break a leg -- narrow passage in the off-limits part of the Paris catacombs. (AFP / Geoffroy Van Der Hasselt)

Visits to the catacombs are so regular and the danger so serious that there is a special police unit dedicated to them --- the “catacops.” If they catch you inside, they'll slap you with a 60-euro fine and an escort out.

I ran into some of these guys a few weeks after my descent and asked if I could accompany them one day, to get the other side of the story. The guy in charge told me that their biggest worry were teens who decide to go on an adventure. “Four go down and three come back up. And then we have to go in and find the missing one.”

I ended up spending about six hours underground, but if I didn’t have a watch, I wouldn’t have been able to tell you that. Time seemed to stand still, suspended. It was like being in another world. 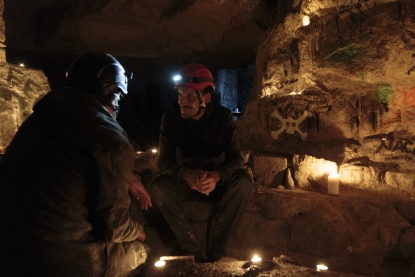 Relaxing in a secret world of the forbidden side of the Paris catacombs. (AFP / Geoffroy Van Der Hasselt) 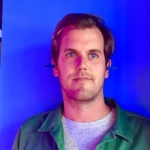