“Son of a bitch”, “emmerder”, “grab 'em by the pussy”...  How exactly do you translate a swear word uttered by the French president or any other political figure, so that an American, Spanish or Argentinian reader really gets the gist? Similarly, how to translate a profanity said by an American president for the benefit of francophone readers? Every time a head of state uses an expletive, the result is instant head-scratching and intense debate in the newsroom, explains Sebastien Blanc, head of AFP's French editing desk in Washington, with the input from his English-, Spanish-, and Arabic-speaking colleagues.

Washington D.C. -  It's January 4, 2022 and an interview Emmanuel Macron has given to the Le Parisien daily is making waves. He's decided to “emmerder” those who aren't vaccinated against Covid-19. It's not exactly a word you'd expect coming out of a president's mouth, but more to-the-point for AFP's anglophone journalists, how do you translate it?

The first story that drops on the wires on this full-frontal attack on anti-vaxxers uses the word “hassle.” But that's soon discarded as too weak. In the newsroom, journalists fire off other suggestions like “fuck them over” or “make their life shit.” The chief editor's office finally settles on the verb “piss off.” 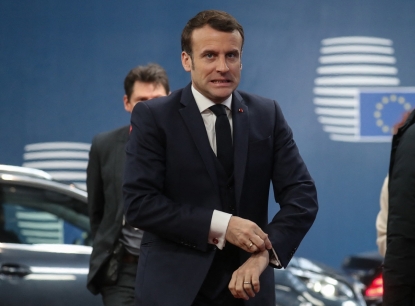 It's much the same debate among correspondents writing for AFP's Spanish wire. “Molestar”, which means to disturb, is seen as too weak and crucially doesn't convey the crudeness of a word that stems from the word “merde”.

“Joder” might be a good fit but it doesn't mean the same thing in Spain, where it can be used to say “fuck” and “hassle”, and Argentina where it isn't as strong and merely equates to “hassle.”

In the end, they decide to use “fastidiar.” They aren't completely happy with that, however, and add a paragraph explaining Macron used the French word “emmerder” which can also be translated as “molestar”, “joder”, “complicar la vida.” 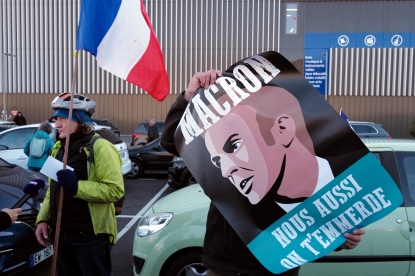 A man holds a banner reading Macron, piss off too ! as he attends the Convoi de la Liberté in Nice, southeastern France, on february 9, 2022. (AFP / Valery Hache)

Some 20 days later in Washington, a similar lively debate erupts in the AFP newsroom after a particularly colourful side-remark by President Joe Biden. Irritated by a Fox News reporter's question, he utters “what a stupid son of a bitch” on the sidelines of a roundtable at the White House.

Who hasn't heard that expression, immortalised in countless films? But what is its French equivalent? On hand in the newsroom are journalists whose mother tongue is English or French, and they're divided.

Some think it should have as literal a translation as possible in the form of “fils de pute” -- literally “son of a whore.” But others feel that “fils de pute” is way stronger in French than “son of a bitch” is in English.

Usually, the first reflex of journalists working in different languages is to check the dictionary, but that doesn't always work. Often, the solution is to ask what that person would realistically have said in another language, under the same circumstances.

So what exactly was the context under which Biden uttered those fateful words? Peter Doocy, the Fox News correspondent, has regular jousts with officials in Biden's administration, including with the president himself. It's nothing new.

.@PressSec on yesterday's hot mic moment regarding @pdoocy: "The president called Peter...he conveyed to him that it was nothing personal." pic.twitter.com/vKMFrU3bEl

This particular exchange wasn't acrimonious. Doocy lobbed his question on inflation across the table as reporters were leaving the room. Biden muttered the words under his breath in a way that didn't appear particularly virulent -- although that doesn't excuse the insult.

He also used “stupid” and “what a” instead of just coming out with “son of a bitch.” Did that strengthen the assertion or mitigate it? In the end, AFP settles on “espèce de connard.”

These debates show just how hard it is to find the right translation for swear words, insults and other jaw-dropping expressions that reflects exactly the coarseness and level of animosity expressed by the person who uttered them. 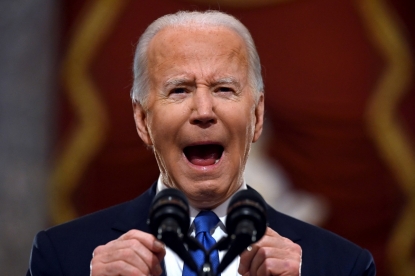 US President Joe Biden speaks at the US Capitol on January 6, 2022, to mark the anniversary of the attack on the Capitol in Washington, DC. (AFP / Jim Watson)

And transliterations are also a problem. Rita Daou, head of AFP's Arabic-language services, recalls the headache caused by the surname of France's former prime minister Jean-Marc Ayrault, when he first came to power in 2012. The problem? In French, the "l" and the "t" in Ayrault are silent, but that literally means "his dick" in Arabic.

A classic conundrum: Arabs unsure on how to report on French PM, since 'Ayrault' means 'penis' in Arabic (haw haw)

Much debate ensued but AFP decided to write it as it is pronounced in French, despite the dodgy double meaning that had more than one Arabic newsreader in stitches.

That decision didn't last long. A tad embarrassed, France's foreign ministry quickly published a statement saying that in Arabic, the premier's surname should be written and pronounced using the "l" and the "t".

Any chat about translation challenges would not be complete without Donald Trump's notorious tirades. It has to be said that journalists puzzling over Biden's insult in January in Washington had ample back experience.

Has anyone forgotten the infamous video unearthed in 2016 where Donald Trump boasted he could grope women with impunity, including “grab 'em by the pussy”?

So misogynistic and crude was the sentence that AFP in French initially decided not to use it and merely described Trump as uttering “un mot très cru pour le sexe féminin” (a very crude word used to describe female genitalia).

But in an update on the story, the expression was translated literally into French. And it didn't end there, far from it. “Crooked Hillary”, “Crazy Bernie”, “Sleazebag”, “Slimeball”, “Horseface”... There was much head-scratching over the years.

Written by Sébastien Blanc in Washington D.C. Translation by Marianne Barriaux in Paris 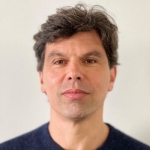 Head of the French Desk for North America, based in Washington D.C.
All posts
Next post