A young girl peers into a pit of rattlesnakes during the Sweetwater Rattlesnake Roundup at Nolan County Coliseum on March 10, 2018 in Sweetwater, Texas. (AFP / Loren Elliott)

Of snakes and empathy

Sweetwater, Texas, US -- I never thought that I would have any kind of empathy for reptiles. They’re not exactly the most lovable creatures. But attending the the largest Rattlesnake Roundup in Texas may have changed my mind. 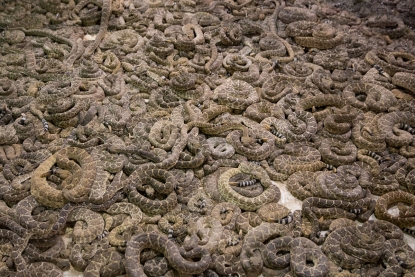 I am not what you would call a city kid. I grew up in northern California immersed in the wilderness. I started fly fishing with my parents as soon as I was coordinated enough to hold a rod, around age five. I went duck hunting every weekend as a teenager. When you grow up fishing and hunting, you’re not uncomfortable with the thought of killing animals. You learn from the get go to be humane about it -- the fish and birds are food, so you make sure that the animals don’t suffer too much in the process.

That wasn’t exactly the vibe at the roundup.

A little background first. This event has been going on annually for 60 years. Organizers say that it was started back then because Sweetwater was so inundated with rattlesnakes that it was too dangerous to live in. To encourage people to settle there and to keep livestock safe, the snakes needed to be culled, the story goes. 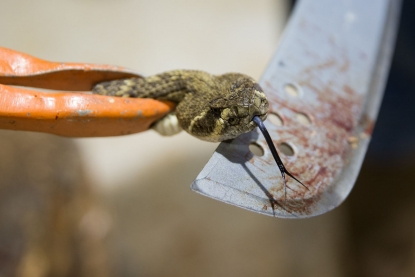 A rattlesnake head, just chopped from its body, continues to show signs of life as it's held up for attendees during the Sweetwater Rattlesnake Roundup, March 10, 2018. (AFP / Loren Elliott)

Sorely-needed cash to a small town

Sweetwater is a small, sleepy, rural West Texas town, with a population of 11,500. In terms of industry and jobs, there isn’t much of either. That’s another argument that people will give you in favor of the roundup -- running  from Thursday evening to Sunday evening, it brings in tens of thousands of people and their cash to a place that sorely needs the latter.

It’s become quite a well-known event in Texas and has been photographed many times. I’d seen pictures a couple of years back, so when I moved to Houston from Florida earlier this year, I knew I wanted to go and take a look. That’s always a challenge for a photographer -- how to photograph something that’s been well covered before, but from my own perspective.

I spent the weekend at the event, which included a side trip to the wilderness with a snake hunter, to see how the rattlers are caught for the roundup.

The event is held at a coliseum and feels a bit like a county fair -- people pay an entrance fee and then wander from stand to stand inside. From what I could tell, you could divide the spectators roughly into two groups -- local folks from West Texas who come fairly regularly for the entertainment of it, and folks from far and wide, who come for the spectacle of seeing those West Texas stereotypes. 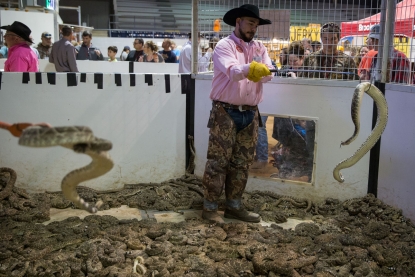 The smell of fear

All of them brave crazy lines and traffic to pay from $5 (children and military members) to $10 (adults) for an entrance ticket and then go from one display to another -- there is the main pit, with hundreds of writhing snakes, a milking station where the snakes’ venom is extracted, a skinning station where the critters are skinned, and ample opportunities for people to get their photos taken with a snake around their shoulders. And the various concession stands, some selling things you would expect (anything and everything made from rattlesnakes), to things you wouldn’t (food processors).

The first thing that struck me was the stench. As soon as you get within 20 feet of the main viewing pit, a foul, musky smell invades your nostrils. After the first day, I did some research and learned that the smell is a pheromone that the snakes release as a sign of fear.

That’s when I first began to get pangs of sympathy for the snakes. While they’re not as endearing as, say, a puppy, it was clear that the creatures were in distress and it was hard for me not to feel some sympathy for them. 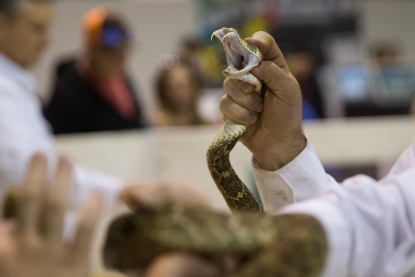 The snakes for the roundup are harvested in the wild, so I tagged along on Saturday to see how it’s done.

Like many animals, rattlesnakes  are pretty predictable and are very scared of any creature as large as a human and try to avoid confrontation with them. Hunters find them most often in dens. Once a hunter finds a den, he needs to get the animal out. Some spray gasoline inside to force the snakes to the entrance, a particularly contentious practice with environmentalists. The hunter I joined didn’t use gas.

He reflected sunlight off a small mirror to see deep inside the den as he methodically searched for the snakes. Then, if he was close enough, he’d use a long pole with a metal “U” on the end to catch the animal. From there, he would normally put it into a box to transport. The hunter I tagged along with put on a show for friends back at the car, grabbing a snake just behind the head so that his friends could pet it. 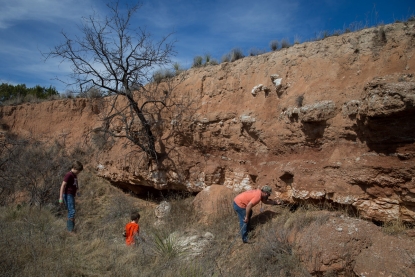 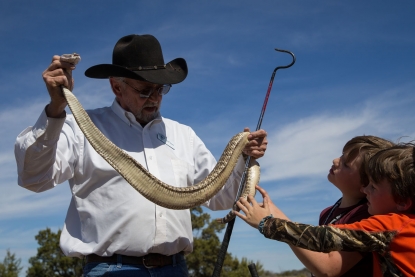 The animals that end up in the main pit at the roundup have all spent some time in those boxes. Some would have spent several days in the tight confines of a box. Once dumped into the pit, the snakes stack so high that some of those on the bottom end up suffocating.

"So a person in the US is five times more likely to die from lightning than from a venomous snake."

The justifications that I heard while walking around the roundup often contradicted the research that I did each night back at my hotel. For example, in the US, approximately five to six people die from a snake bite each year. And that includes all snakes, not just rattlers. For comparison, an average of 30 people have died from lightning over the past 10 years, according to the National Weather Service. So a person in the US is five times more likely to die from lightning than from a venomous snake.

The economic argument -- that the event brings much-needed cash to the town -- is undeniable. Sweetwater is a tiny town, with more people living below the poverty line than the state average. The roundup brings many thousands of people here, spending their cash. That’s a valid argument in and of itself.

The whole event left me a bit conflicted. Those involved in the roundup are doing what they have been doing for years, something they grew up with. But from where I was standing it was pretty difficult to watch. 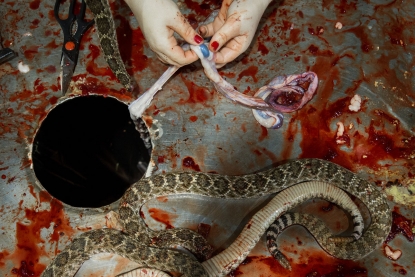 A rattlesnake is gutted and skinned at a demonstration area during the Sweetwater Rattlesnake Roundup at Nolan County Coliseum on March 10, 2018 in Sweetwater, Texas. (AFP / Loren Elliott)

A particularly gory and odd display was the skinning station. Skinning a snake is a bloody ordeal -- as the skin is separated from the meat, the person performing the deed sends blood splattering on anything and everything nearby.

Tradition has it that Miss Texas attends the roundup each year and this year, she participated in the skinning. A beauty queen dressed for a pageant -- hair perfectly coiffed, make-up impeccable, sash in place -- might not be the first person you’d expect to find skinning a recently-killed snake. But you haven’t been to the rattlesnake roundup in Sweetwater. This year’s Miss Texas, Margana Wood, didn’t shy from the messy job of skinning. Her hands were drenched in blood as she pulled organs from the creature. Once finished, she used her bloody hands to leave an autograph on the white wall behind her. 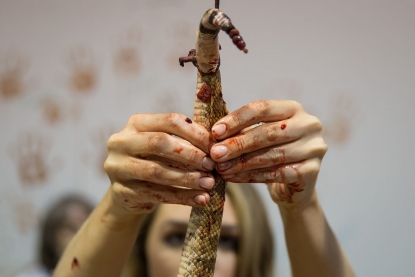 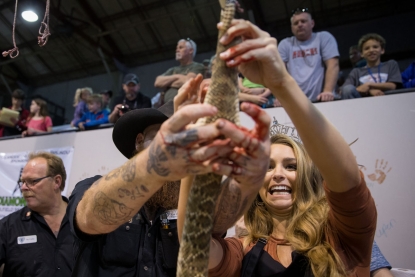 This assignment crystalized for me the fine line that we often have to tread as journalists. Where is the line between someone else’s way of life and animal harassment? I’m not sure I know the answer. My set of life experiences is radically different from the people of Sweetwater. I think as journalists, it’s important to critically question how our own life experiences affect our understanding of the people and events we cover.

There is no denying that it was a memorable assignment for a photographer and I hope to return next year. And I learned that I had more empathy for snakes than I thought I would. 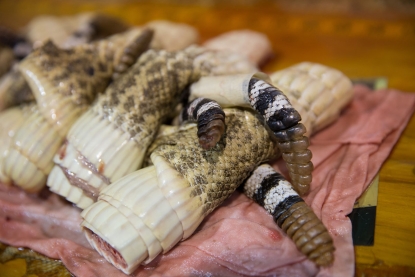 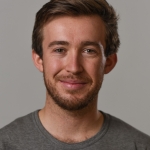 Photographer based in Texas, USA.
All posts 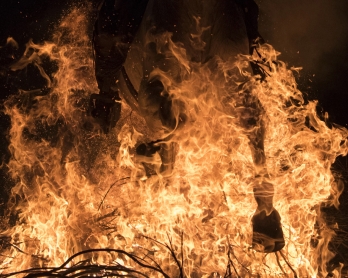 A tale of two statues