BRUSSELS, July 6, 2015 - There are times in journalism when you are so busy, or so tired, that you barely notice a little bit of history passing in front of your eyes.

After ten feverish days of Greek debt crisis in Brussels that included two summits, five Eurogroup meetings and two days of late-night talks between the Greek prime minister and his creditors, it was mainly the tiredness that was getting to us.

Grim-faced and in the grey suit which the Brussels press corps knows him to wear when delivering bad news, the head of the Eurogroup, Dutch Finance Minister Jeroen Dijsselbloem, had an announcement to make. 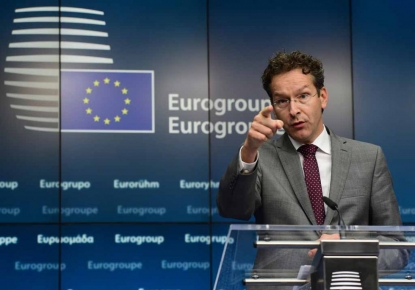 A day earlier, Greece had caused chaos with the shock announcement of a referendum on its negotiations with creditors.

In response, Dijsselbloem told the press, the Eurogroup had refused Athens's request for an extension to its international bailout programme, meaning that Greece would default on an IMF payment a few days later.

AFP had already run the information, several minutes earlier, after obtaining it from two well-placed but anonymous sources, but we still put out a flurry of news alerts.

Exhausted by a week and a half of late nights in the soulless caverns of the EU's official buildings, the whole Brussels press corps was by now running on adrenaline, coffee and junk food, pumping out the news without quite knowing how. 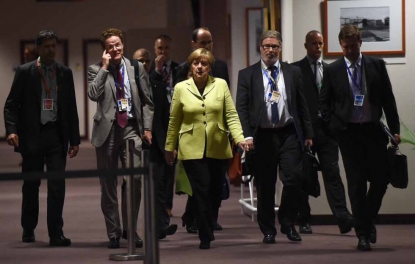 German Chancellor Angela Merkel at the end of an emergency leaders summit on Greece at the European Council on June 22, 2015 (AFP Photo / Emmanuel Dunand)

When an official came to hand out a statement from the Eurogroup meeting, there followed one of the most feral journalistic displays I have ever seen, as the assembled hacks, myself included, fought to grab a copy.

There was nothing there we had not already heard in Dijsselbloem's speech. Except, at the bottom, a tiny footnote, the first of its kind since the single currency was founded: "Supported by all members of the Eurogroup except the Greek member".

In the frantic typing and the sleeplessness, came a sudden moment of clarity.

They finally, really did it. 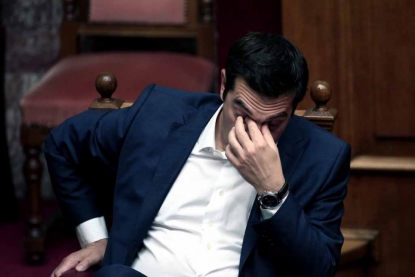 After five years of the Greek debt crisis, five years of talks, five years of stalling, they had finally thrown Athens to the lions. The euro, the EU, the post-war project of a unified Europe, would never be the same again. Greece had, effectively, been consigned to a footnote in euro history.

What made it more of a milestone was that moments of clarity have been so few and far between in the torturous negotiations since Prime Minister Alexis Tsipras came to power in January.

During 11 years in foreign postings with AFP, I've dealt with quite a few shady characters - Pakistan's ISI intelligence agency, the Taliban, the Myanmar junta, Libyan rebel groups, the spin doctors of Downing Street to name but a few - but when it comes to sheer smoke and mirrors, nothing compares to the Greek talks. 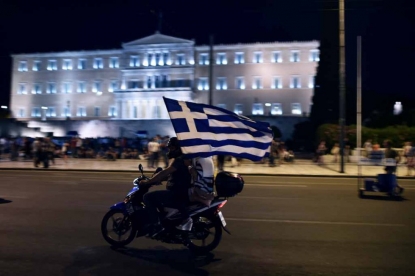 A motorcyclist and passenger holding a Greek flag passes in front of the parliament in Athens on July 5, 2015

Just as Greece has now become the first advanced economy to default on an IMF loan, everything about the Greek story seems far removed from the way reporters are used to working in the relatively well-ordered political and economic systems of the western world.

Reporters are used to spokespeople trying to lead them up the garden path but with the Greek story it has become an art form. On one typically frustrating day when Tsipras was meeting European Commisssion chief Jean-Claude Juncker, officials refused to tell us who else would be involved in their "working dinner".

It soon became clear that what no one wanted to say was whether Dijsselbloem would be there. It was a sensitive issue for the Greeks, who did not want their prime minister to look as if he was being dictated to by the hardline Eurogroup chief. 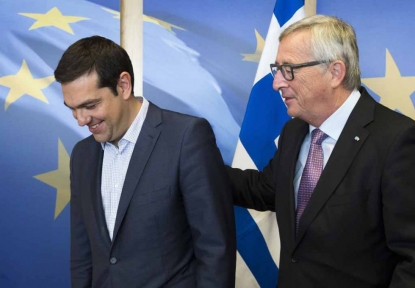 By 9 pm we still didn't know so we went for dinner. On the way back to the office an AFP colleague had a sudden hunch that some important sources could be in one of the restaurants near the Commission. We looked in through the windows of a couple of restaurants and suddenly there were our sources, in a burger joint.

Our intrepid colleague dived straight in and we followed him. After some banter and shared commiserations about another late night ahead, they finally told us what we needed to know: Dijsselbloem was going to be joining the dinner. We left them to it and went to file.

The personalities, the clashes

Brussels may not have the most glamorous image, and it is hard to feel glamorous at three in the morning waiting for a tweet from the Slovakian finance minister. Certainly the idea of summits stretching into the night in the world's most bureaucratic city may not have been my idea of fun a few years ago.

But watching up close the weeks of double-dealing, the personalities, the clashes, has been fascinating. 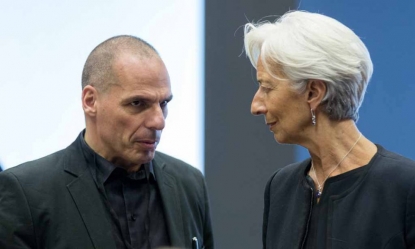 We watched the normally icy International Monetary Fund chief Christine Lagarde lose her cool at a press conference recently, complaining that they needed to have "adults in the room" to reach a deal with the Greeks, to audible gasps from the waiting journalists. We have watched the collapsing relationship between Juncker and Tsipras, which started out with matey hugs whenever they met, but has since descended into acrimony, with Juncker delivering a long monologue after the referendum was called in which he complained of being "betrayed" by the Greeks.

Again, despite all the spin, it is all more reminiscent of the more disordered politics I have seen in more ostensibly chaotic parts of the world.

The dealings with anonymous intelligence sources when I was based in Pakistan and Afghanistan between 2004 and 2008 were about terrorism and war, but the method in Brussels is the same - offers of information or help by officials we can't name, sometimes with an agenda to pursue. 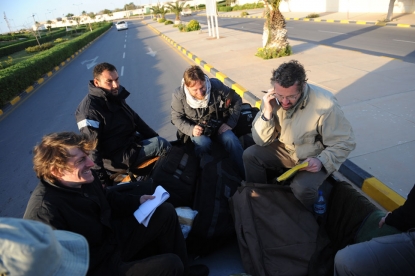 On one occasion in Pakistan we had interviewed the Peshawar police chief in the morning about the rise of a local militant group. That evening the police chief's spokesman called back to offer us a meeting - with the head of that very same militant group, of whose whereabouts they earlier denied all knowledge. I couldn't believe my ears, but the offer appeared to be genuine.

We thought long and hard but in the end we declined, as the offer meant travelling into Pakistan's dangerous tribal areas on the Afghan border, with no guarantee of security except the policeman's assurances. Needless to say, the offer only deepened in our minds the widespread suspicion that Pakistan was secretly backing the Taliban and some of the militant groups who were fighting US troops in Afghanistan.

You see similar, if less dramatic, double games in Brussels. The week before the Greek negotiations finally broke down there was much talk of a final deal being struck, with Juncker's head of cabinet tweeting that a last-minute offer from Athens was a good basis for an agreement. Anonymous European sources then told us the same, talking up the chances of a long-awaited deal.

The only trouble was, it became clear during the course of the week that it was nothing of the sort. Germany and other key eurozone powers said they weren't convinced. And then, as Juncker and Tsipras met late into the night, it emerged that most of the Greek offer evaporated when they got into the details. The talks ended with no deal and deep recriminations from both sides. But both appeared to have calculated behind the scenes that it would look good for them to seem keen on a deal, hence the spin from the sources. 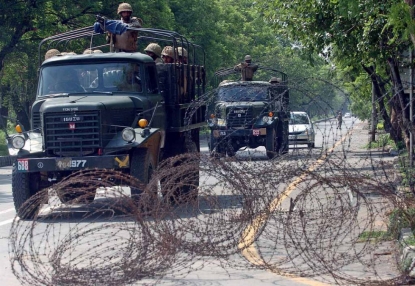 Pakistani soldiers patrol the streets of the violence-hit capital during a break in the curfew imposed in the area of the radical Red Mosque in Islamabad, July 7, 2007 (AFP Photo / Marco Longari)

The echoes between both situations run deeper, to a fundamental uncertainty about the future of a country or an international institution. In Pakistan we spent a week under curfew in the bureau as armoured personnel carriers surrounded the militant Red Mosque. As we listened to fighting raging through the night, the very stability of the country seemed at stake. There is the same feeling now, albeit no longer in dangerous circumstances, as we wait in Brussels conference rooms to see whether Greece will avoid economic collapse and stay in the euro.

For Greece the next page of history remains almost impossible to read at this point.

The only thing we can be sure of, whatever the result: it will mean lots more European summits in Brussels. 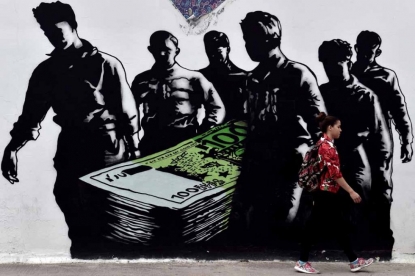 A young woman walks past a graffiti called 'Death of Euro'  in Athens on June 19, 2015 (AFP Photo / Aris Messinis) 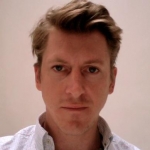 AFP bureau chief, The Hague
All posts
Next post

Clamouring for cash on the streets of Athens