Las Vegas, February 22, 2016 -- In between big rallies, Hillary Clinton's team invites only a handful of journalists to follow her on the campaign trail, so a group of US and international media have set up a pool system -- similar to the one used to cover the White House -- to split reporting duties and share output each day. The print news seat rotates between 14 media outlets, from The Washington Post and The New York Times to The Guardian and AFP.

This time, it is our turn to join Clinton in Las Vegas as she courts the Hispanic, African- and Asian-American communities who make up around half of Nevada's population -- and whose support she crucially needs to bounce back from her crushing loss to Bernie Sanders in the New Hampshire primary.

We are told to turn up Saturday morning at 7:30 am. Traveling with us is the ABC television network, a reporter from Bloomberg, two local journalists and several photographers. We'll spend the day together, bundled from place to place in a van full of "clean" press -- meaning we have been searched by the Secret Service.

First stop: the rear entrance to Harrah's casino, in the heart of Sin City, where the black-suited security officers are already in place as we arrive.

We make our way through a maze of corridors and stairways, led by Clinton's team who scouted out the premises earlier on reconnaissance.

Our destination, deep in the belly of the casino, is the windowless employees' cafeteria.

"Hi everybody!" Clinton beams, as she finally makes her appearance to cheers and applause from the 80 or so people gathered there in kitchen aprons or waiter's uniforms -- who recognize "Hillary" at once, and yank out their smartphones to snap a memento.

"Good to see you," she enthuses as she makes her way from table to table, shaking hands and posing for selfies. "With your help Saturday we can make it happen."

There's not much in the way of a dialogue -- not because Clinton is in a rush, but because everyone is far more preoccupied with getting their souvenir pic.

The situation veers comical more than once as people cling to their phones, trying to keep filming as they shake her hand. 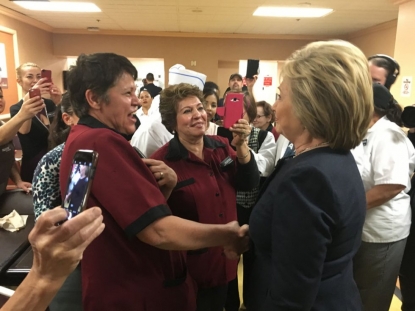 To one kitchen hand who approaches to wish her luck, she replies: "That means the world to me" -- looking him straight in the eyes.

Her only real conversation is with a chef named Richard Meves, who introduces himself as being from Park Ridge, Illinois -- where Clinton grew up.

"You are kidding me!" she exclaims. "Which high school did you go to?"

After five minutes or so, the Clinton team leads us out to the casino's food court, where her appearance sparks a mini-riot among customers having their breakfast -- and amazed at the sight of the former first lady and secretary of state.

It's quite a difference with Iowa, where all the White House contenders spent weeks crisscrossing the state -- to the point of saturation -- before its caucuses kicked off the nomination race on February 1. 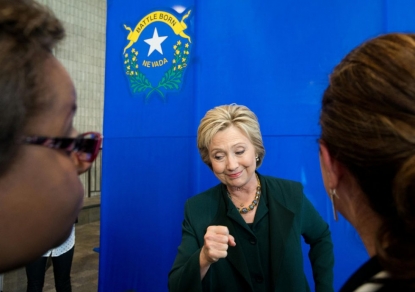 "You're beautiful!" a woman cheers.

"Thanks so much!" Clinton replies. "I need your help on Saturday!" she says over and over, although most of the people here appeared to be visiting from out of state.

Clinton's bodyguards try to keep things at least somewhat under control as the crowd crushes in around their protegee.

She gets chatting to a gay couple in Vegas getting married -- it is Valentine's Day weekend after all...

"Congratulations!" Clinton exclaims. "This is so exciting. Well, can we get a wedding picture?" she continues -- over the shrieks of a near-hysterical woman clamoring for a selfie, a foot from her ear.

"Just one second, let me finish talking with these people," she responds, impeccably calm.

Between Saturday morning and Sunday night, there were seven such excursions, fitted in around two public rallies. 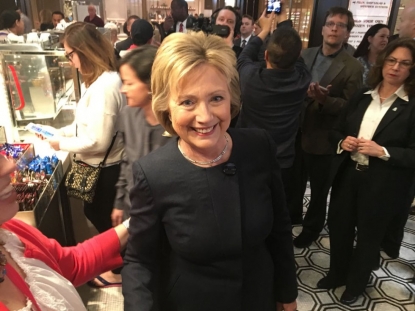 We follow Clinton to two cafes and to the employee cafeteria at the Caesars Palace casino, we head out to meet a group of undocumented Hispanic immigrant families, we visit an African-American church and a kids' indoor soccer field where Clinton is invited to be goalkeeper -- and takes up the offer, in high heels, to the apparent surprise of her traveling press secretary.

'Love' for the press

The Democrat uses the traveling pool when she needs to get a message across -- as she did on Sunday, reacting to the death of Supreme Court justice Antonin Scalia at the start of her meeting with immigrant families.

But we are not always welcome.

Before launching into a question-and-answer session with the immigrants, Clinton suggests our presence could prevent them from speaking freely.

"I don't know if we want to leave the press in for that or not, what do you think, Jorge?" she asks Jorge Neri, who organizes her Nevada campaign.

He thinks not, and we are duly escorted back to the minivans -- though not before Clinton assures us, with a smile, of her "love" for the press. 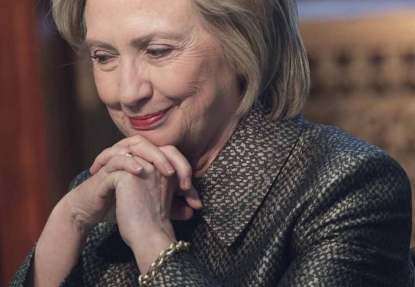 Beyond the photo-ops, some of the trips turn out to be pretty substantial.

On Sunday morning at the Victory Missionary Baptist Church, in a historic African American neighborhood in West Las Vegas, we witness quite a scene.

The swell of an extraordinary gospel choir welcomes the congregation of 500 or so packing the church.

Clinton takes place in the front pew, on the left. We journalists are up on the balcony.

The first news to drop is that African American lawmaker John Lewis is in the room. The Democrat -- who has publicly endorsed Clinton -- is a deeply respected hero of the civil rights movement. 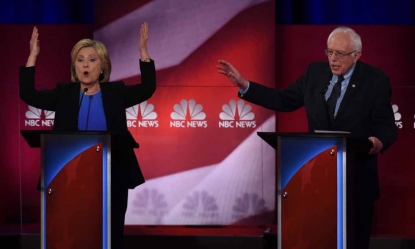 Then, a few minutes later, we are amazed to see Clinton's rival Sanders walk into the church. He slides into the front pew, to the right. His own "pool" reporters join us up on the balcony.

It turns out both candidates arranged their visits separately with the pastor -- delighted to host such high-profile guests -- but neither had been publicly announced.

Each is invited to speak for five minutes or so -- but Clinton gets a noticeably warmer reception from the room. She makes a point of saying she has visited the church before.

Clinton uses her brief address to the churchgoers to launch into an attack on the Vermont senator's proposals -- addressing him as her "esteemed opponent," as she does in rallies.

Sanders and Clinton do not speak, nor do they shake hands. They do not even greet each other. The hostilities have plainly begun. 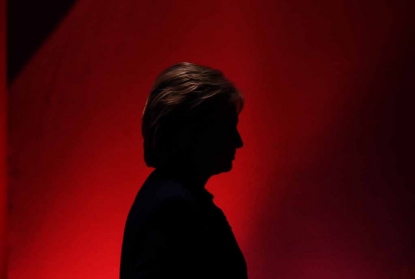 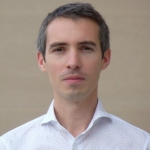 Reporter based in Washington DC
All posts
Next post