Riyadh -- When I first arrived in Saudi Arabia last August, I must admit I was a bit scared. I’d heard and read so much about its treatment of women, I was afraid I wouldn’t be able to work properly as a video journalist. I knew I would have to dress differently, wearing an abaya, but I wondered about how I would be received by people -- both on the street and in officialdom -- with my camera. Travelling in pairs -- Saudi women get into a taxi outside a shopping mall in Riyadh on June 22, 2012. (AFP / Fayez Nureldine)

Turns out their fears were unfounded. I have been well received and accepted everywhere that I have gone, including by male officials.

For me, working in Saudi Arabia was an extraordinary opportunity. I got into journalism in my hometown of Beirut -- over the objections of my parents who thought it wasn’t a proper profession for a girl, that I wouldn’t be able to earn enough and that it would complicate my personal life -- because I wanted to make a difference, to be an example for others. And I think that in small ways, I have accomplished some of my goals, even though I still have a long way to go. Female supporters of Saudi's Al-Hilal attend their team's football match against Al-Ittihad in the Saudi Pro League at the King Fahd International Stadium in Riyadh on January 13, 2018. (AFP / Ali Al-arifi)

What I found soon after arriving here is that being a woman journalist can often be an advantage. Among the many changes happening right now in the kingdom, those that have to do with women are the most symbolic -- you’ve probably heard about women being able to drive, or attend sporting events as much, if not more than, the anti-corruption drive of the crown prince.

But as the country is still deeply conservative, the only way to cover subjects that have to do with women is to send a woman reporter. Enter me. I may not be able to take taxis at night, but my male colleagues can’t even get into an all-women’s concert, or a women's gym.

There are of course plenty of things that I find annoying. When I had to go cover something in a hurry in Beirut, I would hop into a car and go. Since women can’t yet drive here, I always have to rely on a taxi, or my husband. If I have to go outside Riyadh, the taxi has to wait for me until I’m finished. I don’t take taxis alone at night because of safety concerns, so if I’m filming late at night in Riyadh, I have to ask one of my male colleagues to drive me back.

And the abaya of course, is not my clothing of choice when it’s hot out -- you feel like you’re melting as you film on the street. And I would love to be able to sit outside in a street cafe on Tahlia street, which are currently men-only. 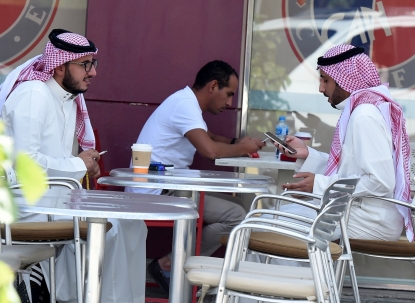 But I am lucky that I get to work in the country at this particular time, when there are so many changes taking place.

The fact that I am a woman doing what is normally considered a man’s job also allows me to establish strong connections with the women whom I cover. Which helps because a strong connection means your subject will be more open and frank, making for a better story. After the authorities said they would lift the ban on women driving, I went into women-only coffee shops to film their reaction. The women I interviewed were so happy and their reactions just came pouring out and I kept thinking “yes, these are exactly the types of quotes I want!” I really think they relayed the feeling in the air. Looking into the future -- Saudi women check out a car at an automobile stand in the Saudi Red Sea resort of Jeddah on October 5, 2017. Women will be able to finally drive in Saudi Arabia from June 2018. (AFP / Amer Hilabi)

Another advantage -- doing stories on families. The family is traditionally a very private realm and it’s difficult to get inside as a reporter. Especially when you’re a man -- many Saudis frown on women being with a male outside of their family in a home setting. And here again what many think is my handicap actually helps -- the fact that I am a woman, a foreigner and work for an international news agency changes things as if by magic. Sometimes I think that the women that I interviewed tell me exactly what’s in their hearts. They know that we can publish things that local media perhaps cannot. When it was announced that women would soon be able to drive in the kingdom, some of the reactions that I got were breathtaking in their sincerity and feeling.

The one thing that does get in the way is the camera. Saudi women can tell me all sorts of things, but they are always afraid to do so on camera. For me, the challenge is to convince them to go on the record; without of course putting them in a compromising or dangerous position. An employee of Careem, a chauffeur driven car booking service, talks during a training session for new female drivers, known in the company as captains at their Saudi offices in Khobar City, some 424 kilometres east of the Saudi capital of Riyadh, on October 10, 2017. (AFP / Fayez Nureldine)

One of my proudest moments in this regard came when I convinced the first woman to work in a gas station, Mervat Bukhari, to go on camera. At first she didn’t want her face to appear. Then she didn’t want to be filmed supervising the work of her male subordinates at the station in Khobar. But I explained that this is exactly what her work is. I told her that by daring to show her work as it is, she would be a real example of what a Saudi woman can be today. Finally, she accepted to be filmed doing her job and I was very proud. It took courage for her to do so. And I’m sure that it’ll make a difference to others.

One of the most surprising things that I discovered was that being a video journalist has not hampered my relations with men. It’s quite rare to have a woman camerawoman, it’s one of those jobs considered ‘masculine.’ When I film on the street, men are quite surprised to see me. The most curious come up to ask what I’m doing. But they have always been very polite. Noone has spoken inappropriately. Some ask, attentively, if my material isn’t too heavy to carry...

I’m not saying that it’s easy for a woman to work here as a journalist. It is still, after all, a very traditional and conservative society. But I’ve found that if you respect others, they will respect you. 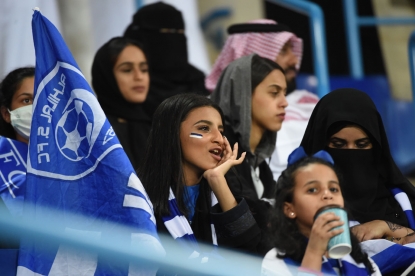 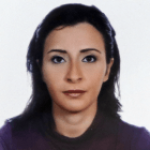 Video journalist based in Saudi Arabia
All posts 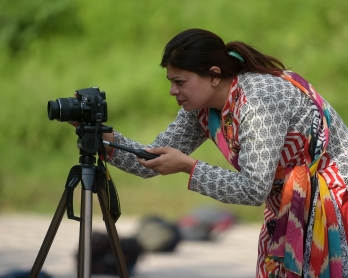