Mogadishu -- The morning of January 25 started out as any other. Like the rest of the residents of my hometown, I woke up not knowing whether I would make it to see the sunset. Such is life in Mogadishu -- every morning when you get up, you can expect that something bad will likely to happen to you or someone you know.

Every morning when you get up, you can expect that something bad will likely to happen to you or someone you know

Mogadishu, like the rest of Somalia, has been wracked by one kind of conflict or another since 1991, when civil war first broke out in the east African country. Eventually a central government backed by the international community was formed in 2012. But the violence hasn’t stopped. Over the past several years, the people of Mogadishu have been enduring bombings and attacks by Al-Shabaab jihadists. There have been so many that people now just expect them. 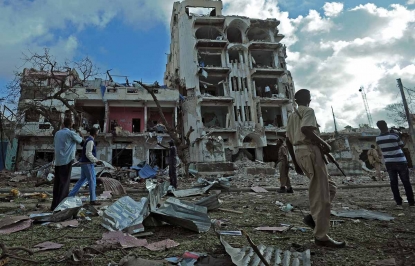 Scene of a terror attack outside the Ambassador Hotel in Mogadishu on June 2, 2016. (AFP / Mohamed Abdiwahab)

On the morning of January 25, I did what I usually do. I took my cup of tea and sat down in front of my computer, to check local websites to see what was going on. That’s what all journalists like me do in the mornings in Mogadishu. I love being a journalist, it has been in my blood since I was a kid in primary school. After graduating from high school I worked for a few radio stations, and for the past six years, I have been working for AFP as a video journalist. I also work as a photographer for the European Pressphoto Agency and for All Headline News, a US based news website.

As I read the news that day, I heard a familiar sound -- a loud explosion outside. I and the rest of Mogadishu residents know them well -- a deep thud. This one wasn’t too deep, meaning that the explosion took place not too far from my house. I immediately ran outside to see what was going on. 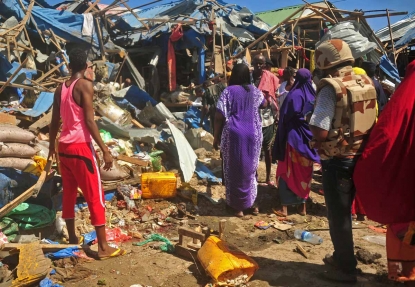 Every time one happens, there is shock, and fear, and pain.

I saw black smoke rising from the city. Then I heard gunfire. So there wasn’t just a bombing, there were also gunmen involved. I rushed back into the house to grab my camera and set off for the smoke. It wasn’t too far away -- about a kilometer -- so I went on foot, sometimes running, sometimes jogging, sometimes walking fast. The people along the way were shocked by the explosion. That’s the peculiar thing about living in a place like Mogadishu, where attacks take place on a regular basis -- you get used to them happening, but you don’t become immune to them. Every time one happens, there is shock, and fear, and pain. So on that day, I passed people standing outside their houses, looking at the black smoke rising toward the sky, people like me rushing closer to the site to see if any of their loved ones were killed or hurt, God forbid.

It didn’t take me long to get to the scene, the Dayah Hotel. Along the way, I ran into a checkpoint manned by government soldiers. ‘Where are you going?’ barked a soldier. ‘I am a journalist, I need to go cover the bombing!’ They let me go. I ran into several other such checkpoints, at each one losing precious minutes that I could be filming. I cursed the delays then. Today I thank God for them. 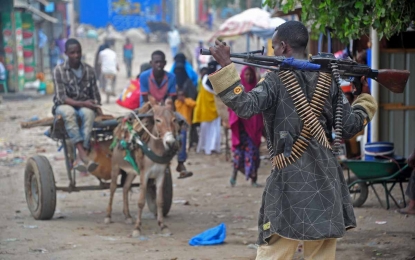 Somalia soldiers on patrol in Afgooye, some 30 kilometres south of Mogadishu, on October 19, 2016. (AFP / Mohamed Abdiwahab)

Finally I got to where I could see the hotel entrance. I was shocked at the destruction. All the nearby houses were destroyed. The wounded and dead were already being taken away from the area. I could see people lying on the ground, bleeding, asking for help. I stopped by a seriously wounded young man whose lower half of the body was covered by debris from a wall. I and several other people tried to get him out, but we couldn’t. Rescue workers then took over.

Immediately I started to shoot. I saw my colleagues further ahead, inside the grounds of the hotel. I saw a silver Toyota Noah in front of the entrance. I was holding my camera, shooting, when that car exploded. Luckily for me, I was far enough away (thank God for those checkpoints and all those minutes I lost there) that I wasn’t hurt. I kept shooting, capturing my first car bomb on camera.

My colleagues, the ones on the scene, weren’t so lucky. Seven were hurt, including my AFP colleague, the photographer Mohammed Abdiwahab, who suffered shrapnel wounds.

I have to record this... Otherwise, how will people know what is happening here?

After the second blast, I could see dead bodies and human flesh scattered on the street. Bleeding, wounded people were everywhere. It was heartbreaking. I saw a government soldier trying to lift wounded people. There was black smoke everywhere. I was shaking. My legs were shaking. I snapped out of it when that soldier asked me to help him pull wounded people out. I can’t, I have to shoot and record this, I said. I went back to work. I have to record this, I thought, this is my job. Otherwise, how will people know what is happening here?

I had never seen something like that before. I was less than 10 or 15 meters from the car bomb. I got lucky, both because I wasn’t closer (thank you, soldiers who stopped me at the checkpoints along the way) and because the blast went the other way. All the shrapnel went to the other side, that’s why I survived. 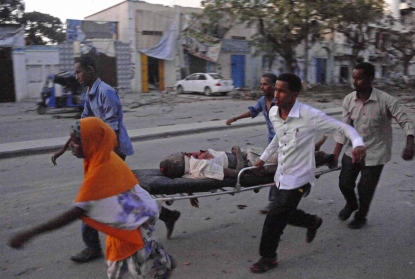 Carrying away the wounded from an attack at the Ambassador Hotel, June 1, 2016. (AFP / Mohamed Abdiwahab)

Within a few minutes, my cell phone rang. It was my sister, asking me if I was ok. That’s another ritual of life in Mogadishu. After every bombing, you call your loved ones to make sure that they’re ok. She would tell the rest of my family that I was fine. I kept shooting.

I could see an old man standing next to the rubble. Beneath all the destruction was his small restaurant. Before the blast, he, his wife, teenaged daughter and son were inside. He was looking for them, hoping, praying that they had survived the blast. He was very sad and his face was gloomy. He didn’t know if they were going to be found alive or dead. I can still see his face before me. 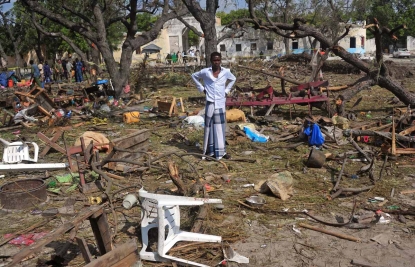 The January 25 attack, which left 28 people dead, will stay with me forever for lots of reasons -- it was one of the most dangerous that I’ve covered, it hurt so many colleagues, I got one of the blasts on tape. But there have been so many others.

Like the one on the Sahafi Hotel in the heart of Mogadishu on the morning of November 1, 2015. Al-Shabaab gunmen rammed a car filled with explosives inside the hotel. I and other journalists were standing in front of the hotel, shooting with our cameras. The gunmen inside began to shoot at us. We ran and took cover wherever we could. One of my closest friends, Mustafa Shafana, a cameraman for Al-Jazeera, took refuge in a nearby car. What he didn’t know, my dear friend, was that the car was left by the gunmen and it was laden with explosives. They went off. My dear Mustafa died.

Or like the one on January 21, 2016, when Al-Shabaab fighters attacked a popular beachside restaurant in Mogadishu. The Lido beach area is filled with restaurants, including upscale ones popular with local businesspeople and Somalis visiting from abroad. I was home when I heard loud explosions. My phone started ringing, with friends telling me what had happened. I grabbed my camera and went straight to the area. The gunmen had detonated a car bomb before forcing their way inside the restaurant, spraying it with gunfire.

Dead bodies were scattered on the ground

It was difficult to get to the scene. I could only hear the crackling of machine gunfire and grenades exploding. After a few minutes, I saw young men and women with wet clothes coming from the beach. They seemed to be escaping. Minutes later, a loud thud. Another car bomb went off in front of the bar. The area dissolved into smoke and flames. I didn’t manage to get shots of this, just the wounded people. Eventually I left the area. The next morning I came back before dawn. Dead bodies were scattered on the ground and family members of those killed were crying. At least 20 people had died. It was one of the deadliest attacks that I have covered. 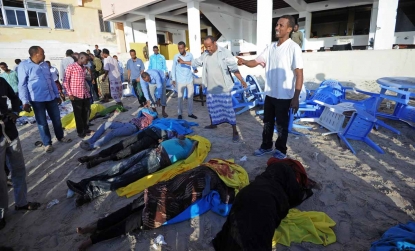 Dead bodies on Lido beach the day after an attack on a seaside restaurant, January 22, 2016. (AFP / Mohamed Abdiwahab)

As a journalist, on top of the regular fear that all Mogadishans have of being killed in an attack, you have the added fear of being targeted because of your profession. The fear is always there. The last journalist who was killed in a targeted killing was Abdiaziz Mohamed Ali, who was gunned down by gunmen as he visited his parents in Mogadishu in September 2016.

In 2016, for the second year in a row, Somalia came out on top of the Global Impunity Index, which is compiled by the Committee to Protect Journalists and which highlights countries where journalists are slain and their killers go free.

I was born here and I like it here

So why do I stay? Because I think my job is important and this is my homeland. I like to be with my family, with my people, my community. I am part of them and I like to live with them and to survive with them. In all situations. I was born here and I like it here.

If a journalist is killed or gone, then the news dies

I have five young children, three boys and two girls. The oldest is seven and the youngest is just eight months old. Of course I worry about them. My work is very risky. I worry about their education, about their future. I do all to educate them and to make them happy. But they are home. If I leave, I will not be home. I was in Paris once, doing training for AFP. Paris was a beautiful city, with beautiful buildings. But I came back here. If I leave my country, I can see beautiful buildings, but they will not be mine, I will be an outsider.

I hope that Somalia will be peaceful and stable one day. One day, it will happen. Whether during my lifetime or after, I don’t know. But one day it will happen, Allah willing. 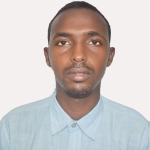 Freelance video journalist based in Mogadishu
All posts 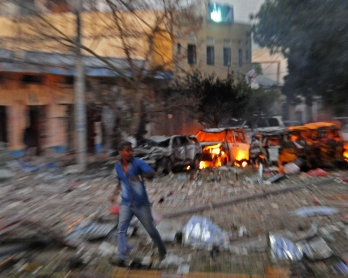 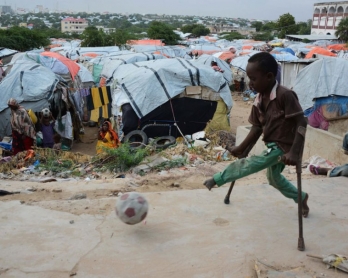 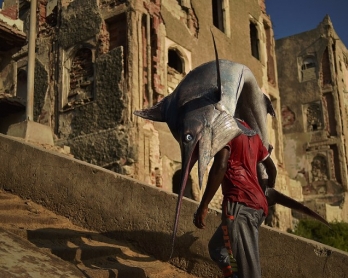 The pull of ancestors

The pain and sadness in the air