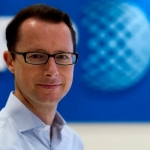 "It was the arresting image of an elderly man in a face mask lying dead on a pavement in Wuhan which told us that perhaps it would be different this time," writes AFP Global News Director Phil Chetwynd.

"It was January 30 and AFP journalists had been covering the increasingly dystopian scenes in the Chinese megapolis. Now it suddenly felt out of control, bigger than we imagined."