Armero, Colombia, November 13, 2015 – Armero is one of those tragedies that sears itself into memory. Not so much because of the number of the dead, but because of one image. In this case, of a girl named Omayra Sanchez, blocked by debris in putrid waters following a monstrous landslide that wiped her Colombian town from the face of the earth in mere minutes following the eruption of a nearby volcano.

It was November 1985 and for days the Nevado del Ruiz volcano, rising 5,321 meters in a fertile valley some 160 kilometers west of the capital Bogota, had been showing signs of life. The last time it erupted, in 1595, it killed hundreds of people. But despite its rumblings, authorities assured the population there was nothing to worry about.

“The earth shook regularly, ashes covered everything, the water was completely contaminated. But city hall said to just cover your nose,” says Alma Landinez, 56, who was one of the lucky ones to have survived the tragedy.

On November 13, the volcano did erupt. The lava spewing from its crater melted the nearby glaciers, sending rivers of mud, earth and debris rushing down the slopes. Picking up speed in the riverbeds at the base of the volcano, these massive slides engulfed Armero within minutes, killing more than 25,000 people. 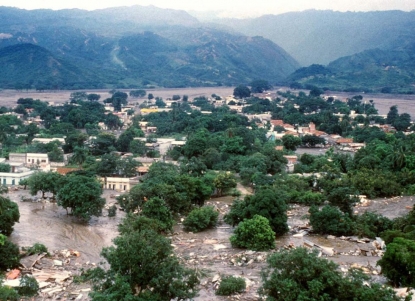 The town of Armero after being enfulged by landslides, November 18, 1985. (AFP)

Olga Villalobos was 13 years old at the time.

The night of the eruption, “it rained ash and rocks,” she says, her twinkling eyes not betraying the horror she lived through all those years ago.

Her family tried to flee in a car, but didn’t have time.

“There was like a crack of thunder. Then water and mud rushed into the car.” Olga felt herself suffocating and thought she had died. “I let go of my mom and my little brother. That’s what saved me.”

She ended up spending a night in the mud, but in the end was one of the lucky few who actually escaped alive.

“There is nothing left,” a rescue official said on the radio after flying over the town in a helicopter. The crater of the Nevado del Ruiz volcano four days after the eruption, on November 17, 1985. (AFP / Jonathan Utz)

When Jairo Higueria, a photographer for the El Espectador newspaper, arrived on the scene, he had to place sacks of rice on the ground, one in front of the other, just to be able to move forward.

“It was nothing but a beach of mud,” he says.

Eventually he stumbled onto a group of Red Cross rescue workers trying to help a teenaged girl who was pinned down in the debris by sections of wall, an iron bar stuck in her hip, submerged in the cold putrid water up to her chin. Eventually he would learn her name -- Omayra Sanchez.

Her ordeal -- she would spend three days stuck pinned down as rescuers tried in vain to free her, before dying -- would end up captivating the world, as photographers recorded her agony.

“At that time, Omayra was the only one left alive, I spent an hour or two there,” Hiqueria says. But after a while, he had to leave, to send his film on the first bus to Bogota from the neighbouring town of Mariquita.

“Night had fallen and it was impossible to return to the scene. When I came back the next day, she was dead,” he says, overcome by emotion after all these years. “I cried and cried.” “Armero was the saddest thing that I have ever covered,” says this seasoned reporter, who has seen his share of human grief over the years covering Colombia, torn by 50 years of conflict, be it at the hands of hard-left guerillas, far-right paramilitary groups, the armed forces or the cocaine barons.

For Cris Bouroncle, who has seen much bloodshed covering Maoist guerrillas in Peru, the Pinochet dictatorship in Chile and the Iraq war, Armero remains “a very moving experience.” In his personal archives, he has saved an image taken by another photographer, Joaquin Villegas, who has since died. The photo shows a mud-covered woman being carried by rescuers, an image that marked the first time an AFP photo graced the cover of Newsweek magazine. 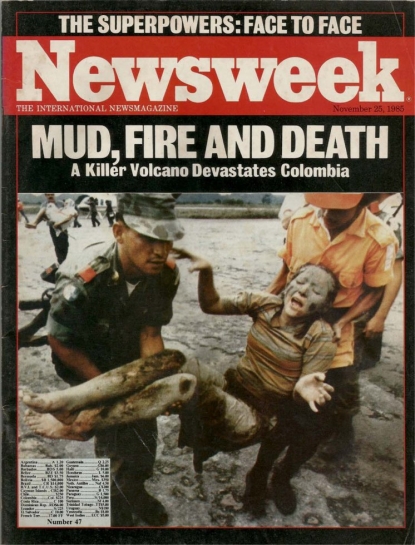 Picture of AFP photographer Joquin Villegas on the cover of Newsweek in November, 1985.

Frank Fournier, who took a celebrated photo of Omayra that would win the World Press Photo award the following year, recalls that the girl was “an incredible personality.” “She spoke to the people trying to save her with utmost respect, telling them to go home and rest and then come back.”

“The photo, it was she who did it. The look in her eye was a gift. I did nothing but hold the camera,” he says.

“There were disagreeable comments at the time, like ‘why didn’t the photographers try and pull her out?’ But they only reflect the sadness that people feel seeing the image of this little girl,” says the 67-year-old, today a freelancer based in New York.

AFP’s story at the time spoke of Omayra’s “slow death” -- she died after 60 hours, with rescuers unable to extricate her “from the mud without risking pulling off her legs.” 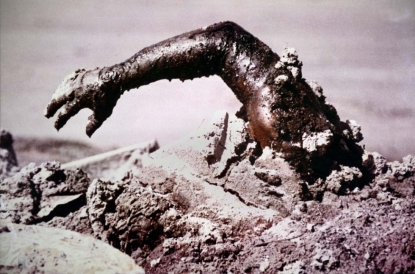 A victim of the massive landslide. (AFP / Cris Bouroncle)

Today at the site, there are a few funeral stones and a few crosses that mark the places where people think their loved ones found their end.

Alma Landinez returns here every year to clear what she thinks is the place where her house once stood. She lost fourteen of her loved ones in the disaster, including five of her seven brothers and sisters.

All that rests of the once-lively town are ruins, overrun by trees and vegetation. Where the downtown once stood, there is a concrete arch reaching for the sky. It symbolizes “those who are no longer here,” according to the artist who erected it, Hernan Diario Nova. 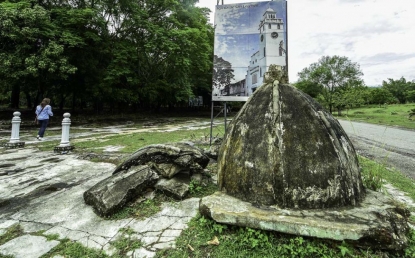 Each year, on November 13, a commemoration ceremony takes place near the arch, where Hernan Diario has placed 25,000 stones, one for each person killed, near a cross that was erected during a visit to the site by Pope John Paul II in July 1986. Instead of the rain of ash and rocks that struck before the disaster, helicopters release a deluge of flowers over the site.

But the rest of the year, Armero remains abandoned and haunted, dotted by trash that visitors have left there. The grave of Omayra has become a pilgrimage site, with hundreds of trinkets that people have left, as if she were a saint.

“We leave a word to thank her, to ask her for a favor,” says July Amezquita, 29, whose husband folds a piece of paper that he then carefully places in between the candles, the toys and the flowers. 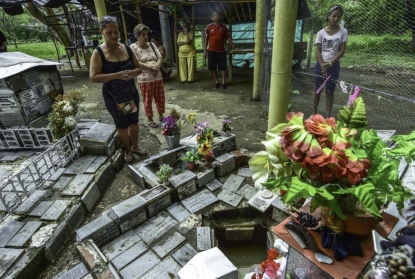 The immense desolation of Armero reminded me of the 1999 Vargas tragedy in Venezuela. I had just arrived in Latin America, on my first foreign assignment, based in Montevideo. Several days of torrential rains unleashed ferocious mudslides, causing chunks of the coastal hills to literally fall into the sea.  Torrents of mud and rock swept away both slums and luxury homes alike, with an estimated tens of thousands of people killed. In places the coastline advanced by two to three kilometres into the sea.

I still remember a seven-year-old boy named Vangelis, who spent seven hours stuck buried up to his waist in the debris. 'My Mom held on to me above the mud,' he told me when he left the hospital two weeks later. 'I felt her warm hands. And then they were cold.'

I never forgot the smell of death in Vargas. I came back six months later. There was no more trace of the dead bodies. The main route had been cleared. Houses were intact on either side of the road, in the dried mud. But there reigned an oppressive silence. Just like in Armero. An immense silence that reminded me of all those cities and lives taken away by catastrophes, whose memories eventually fade with the passing of time. 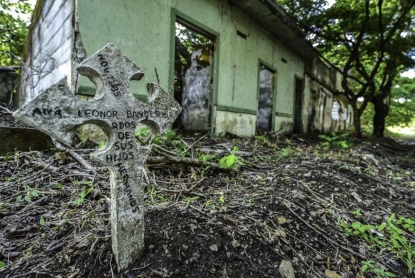 A cross at the ruins of Armero. (AFP / Luis Acosta) 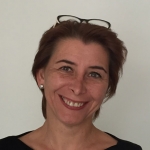