Sara Danius, Permanent Secretary of the Swedish Academy, announces the winner of the 2015 Nobel Prize in Literature on October 8, 2015 in Stockholm (AFP / Jonathan Nackstrand)

Stockholm, October 20 -- Covering the annual Nobel Prize announcements in Stockholm and Oslo is a little like writing a major exam at school, with one big exception: you’d never studied the subject before.

Every year in early October the winners of the prestigious awards for pioneering work in the fields of medicine, physics, chemistry, literature, peace and economics are revealed during a week of ceremonious daily announcements by the individual prize committees.

It's usually a nerve-wracking, hair-pulling experience for AFP's reporters that begins weeks before in September, when speculation begins to mount about possible laureates in each field, with the literature and peace prizes garnering the most attention.

The committees always remain tight-lipped about the nominees, and their deliberations are sealed for 50 years. 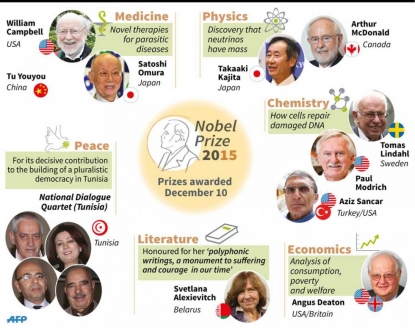 That leaves journalists and pundits to engage in a guessing game, as we try to write insightful advancers about those believed to be in the running, knowing full well that one person's guess is as good as another's.

Finally Nobel week arrives. Previously, the committees dispatched special couriers to all major media outlets. They arrived with an envelope containing the winners' names grasped tightly under their arms, only handing it over on a given signal received by phone: "Go! Go! Go!"

When I started covering the Nobels, AFP used to have to meet up with other agencies at the Swedish news agency TT’s offices, where the courier had an envelope for each agency. I used to have to grab the envelope and run to our nearby office to write up the story, a system that worked well until one time my heel caught on a power cord as I dashed off, pulling the plug on some poor reporter’s computer at the most inopportune moment... 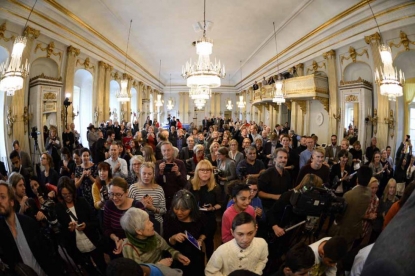 Journalists wait for the announcement of the winner of the 2015 Nobel Prize in Literature at the Swedish Academy on October 8, 2015 (AFP / Jonathan Nackstrand)

But times have changed, and the announcements are now broadcast live on TV, and press releases are published on the Nobel Foundation's website instantaneously. Only the medicine prize committee continues to send a courier to our office, the same woman who has been coming to us for almost 15 years. (That's tradition for you.) Each day, the Foundation's website features a large clock on the homepage, ticking down the minutes and then the seconds until the big announcement. Three, two, one, and the winner is...

Now the rush begins, as we quickly file an alert with the winners' names (no spelling mistakes please!) and scramble to find out their nationalities, not always indicated in the committee's press release. If we’re lucky, the website functions well, but with so many people trying to access the site at the same time it occasionally crashes. Once, I couldn’t access the site to find out the physics prize laureates, and after a flood of obscenities streamed from my mouth, a colleague who had managed to get on the site just before me printed the page. Saved ! Why did the committees have to stop sending couriers?? 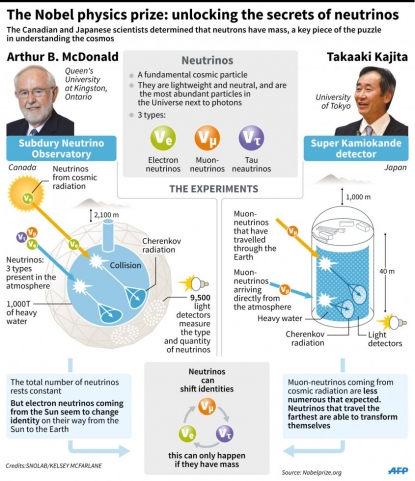 Each prize brings its own challenges. For the scientific prizes, this involves simplifying highly-technical, groundbreaking research that you've probably never heard of into simple language that will make sense to a general readership. It's a daunting task for most news reporters. (Note to self: in next life, pay more attention in chemistry class!) Take this year's physics prize. The statement said the award was going to Takaaki Kajita of Japan and Arthur McDonald of Canada "for the discovery of neutrino oscillations, which shows that neutrinos have mass". Neutrino oscillations? Huh?

We do our best, using background material provided by the committees as well as Internet searches, and try to have a full 600 word story on the wire as fast as we possibly can.

When it comes to the literature prize, sometimes we get lucky. For writers and authors whose names are appearing most frequently in the run-up to the announcement, we ask AFP bureaus around the world to have some material ready to go in case one of them is indeed the lucky one. And this year it paid off: our Minsk bureau had prepared a piece about Belarussian writer Svetlana Alexievich that was published within minutes of the news that she had won. 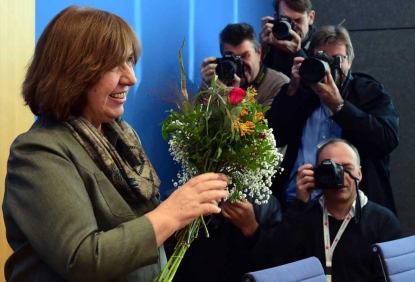 The laureate of the 2015 Nobel Literature Prize, Belarussian writer and dissident Svetlana Alexievich, receives a bunch of flowers from well-wishers prior to a press conference in Berlin, on October 10, 2015 (AFP / John MacDougall)

We were not as lucky with the peace prize this year. The only one of the six Nobels to be announced in Oslo, it is perhaps the most closely-watched prize.

Our Oslo correspondent Pierre-Henry Deshayes has his ear to the ground throughout the year, following the Norwegian Nobel Committee's statements to see who might be on their radar for the prize.

Every year, he prepares background material for a plethora of possible winners, describing peace processes and profiling mediators. So this year we had loads of background material ready to be used in case the honour went to Angela Merkel, the UNHCR, a Catholic Eritrean priest, two survivors of the Hiroshima and Nagasaki atomic bombings, anti-nuclear group ICAN, Congolese doctor Denis Mukwege, the Colombian peace process partners and the Iran nuclear deal partners, all of whom were seen as possible laureates. So we felt pretty well prepared.

The head of the committee Kaci Kullmann Five steps up to the microphone, and announces that this year's laureate is ... Tunisia's National Dialogue Quartet!

A moment of panic hits the entire AFP team as we realise we have nothing prepared for this laureate. And then we do what we're trained to do: act quickly on our feet and get the story out as fast as we can. 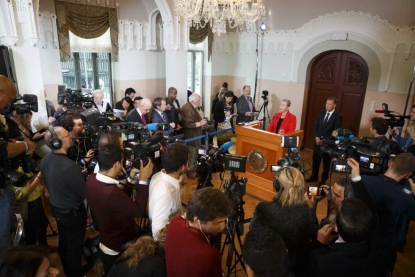