Paris, November 18, 2015 -- Their names were Bertrand, Chloe, Halima or Thierry. They were a student, a banker, a mechanic or a waiter. Most were in their 20s and 30s. All died in the Paris attacks of November 13 or in the days that followed, from their injuries.

A small team of AFP journalists was put in place after the tragedy to try and collect at least a few personal details about each of the victims. The result is an interactive database, so that the death toll does not just consist of a number and so that each victim has a face.

“It’s very sad work,” says Paul Aubriat, one of the members of the team. “Most of them were young, healthy. You sense that they liked life, to go have a few drinks. Many had children. Some left their pregnant partners behind… Without ever having known them, you end up feeling close to them. We end up knowing their lives, learn their names by heart… It became even more devastating on Monday, when many of those who had been missing were found dead and when the wounded began dying in hospital.”

To find personal details about the deceased, the journalists scour social networks, especially Facebook and Twitter accounts of the victims and their loved ones. The regional French press has also proven very helpful, as many of the local papers have published articles on the victims who came from their regions. Then there is the old-fashioned way -- a phone call to an employer or the mayor of a town. Rarely to family. “It’s not the moment to disturb them,” says Juliette Michel, another journalist with the team.

The decision to collect biographical details of all those killed was taken two days after the attacks. This assiduous work has been undertaken by up to six journalists. It’s in the form of a long story that gets updated two or three times per day and sent on the wire to French clients. The list is likely to get longer, as not all victims have been identified. For legal reasons, no photos of the victims have been published, but the interactive database, developed by the agency’s graphics service, allows to add a visual aspect to the final product. 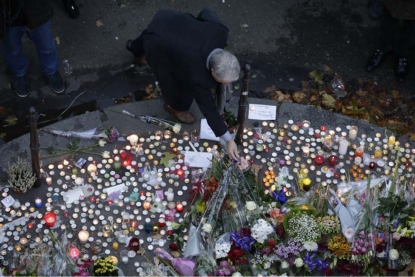 Memorial outside of the Bonne biere cafe. (AFP / Kenzo Tribouillard)

Why do this? “Because it can be useful to everyone and also to show that we are not forgetting the victims,” says Juliette Michel. “That it’s not just 129 dead, but people who had a story, family, friends.) 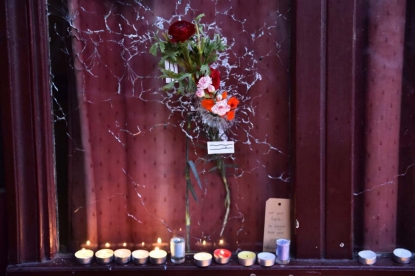