Mr. He gets ready for showtime. (AFP / Johannes Eisele)

Kunming, China, February 10, 2016 -- When I first heard about the Flower Lantern group, I immediately thought it would make a nice story -- retired actors from different Yunnan operas meet at a small stage above a vegetable market (of all places), and perform in an effort to keep a tradition from dying.

Similar to the wider-known Peking Opera, the performances in Yunnan date back more than 200 years. They have even been declared part of China’s “Intangible Cultural Heritage” by the government.

During my nearly two years in China, I have seen lots of traditional culture -- at least in Shanghai where I live -- being replaced by modern events that have an artificial, fake feel. So it sounded promising to see old people trying to keep up old traditions. 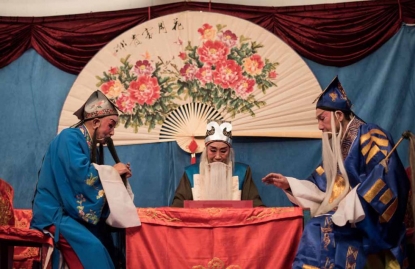 I arrived in Kunming, known in China as the city of spring, along with AFP’s Shanghai intern, Stella, who initially told me about the troupe. We came here after a few days in the Tibetan mountains of Yunnan. It was warm, almost like spring, compared to the harsh cold in the mountains.

We took a cab to the vegetable market, a huge market selling all kinds of food for the spicy Yunnan kitchen. I assumed it would be a matter of minutes to find the stage. It was not.

The Zhuanxin Food Market is apparently the largest food market in Kunming, with a multitude of vegetables, fruit, meats, seafood, spices and snacks on offer. One of the vegetable sellers told us the opera was on the third floor of the huge building.

So we climbed to the third floor and wandered around, surrounded by the smells of the various vegetables, fish and meat, sipping freshly-made soy milk as we tried to find the elusive house of culture.

In the end, it took us almost 30 minutes to find it. We kept climbing stairs only to find restaurants, shops and mahjong casinos filled with elderly customers.

Finally, between a vendor selling hats and another sausages, we finally found the stairs leading up to the venue. 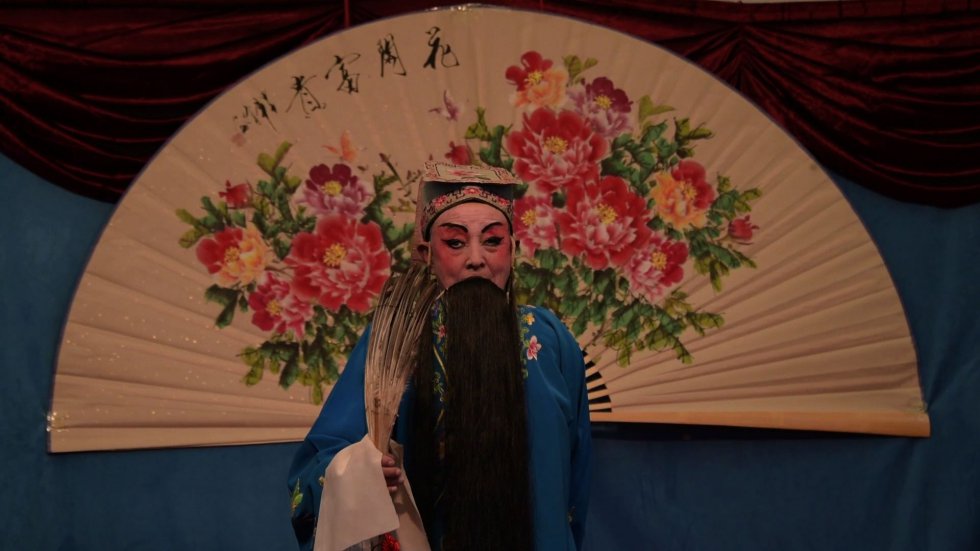 We entered an almost empty hall, with a suspended roof, two tables where a handful of elderly patrons were playing mahjong and an empty stage in the back.

We walked behind the stage and saw the director, 72-year-old He Zhengcai, leaning over a sheet of paper as he wrote the script for the day’s show.

Mr. He was very friendly, with a loud voice and an infectious laugh. My Chinese is pretty poor and he had a strong Yunnan accent, so it was impossible for me to catch anything that he said.

"The situation is getting worse each year, our stage has moved seven times and each time it gets smaller," he told Stella. 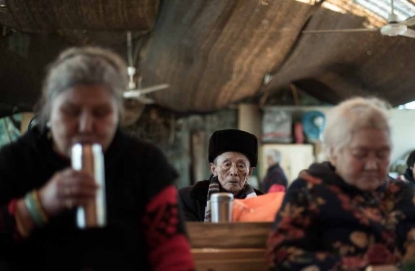 The troupe performs every day, donning richly colored robes and false beards to belt out the tunes passed down for more than two centuries, their droning instruments and singing mingling with the sounds of the vegetable market just outside.

But despite their efforts, their audience shrinks every year.

"Nowadays there are so many kinds of entertainment, young people are no longer interested in this art, and our audiences are old fellows in general," Mr He told us.

As he spoke to us, the actors trickled in. They immediately set about putting on their makeup, looking into rusty mirrors as they painted their faces. Like Mr. He, most of them had decades of experience performing. As they prepared, Mr. He told them their parts for the day’s performance. One man prepared the costumes. 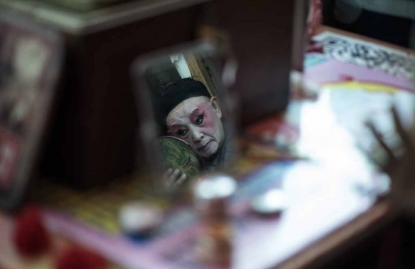 Mr. He gets ready for showtime. (AFP / Johannes Eisele)

The show began with some music. I love the sound of the Chinese gong which sound pitches after hitting: Doing- doing - doing.

The performance lasted about two hours. The elderly patrons at the two tables in the back did not stop playing mahjong and talking the entire time. 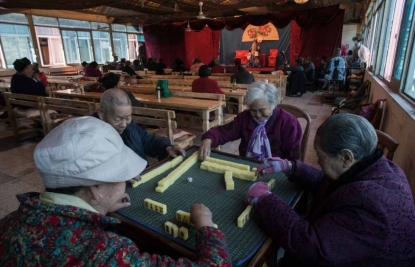 "The show must go on. And so must the mahjong. (AFP / Johannes Eisele)

A few dozen people sat on makeshift benches watching the performance and drinking tea. A small group of youngsters seemed to be there for the same reason that I was -- to see something different. They would snap a few pictures on their smartphones and then wander off.

When I sat on the ground in front of the stage to get some close-up shots, one of the old ladies gave me a piece of paper to sit on so I wouldn’t get dirty. They seemed to care more about my wellbeing than about the show. I guess they were regulars who probably came every day and I served as a distraction of sorts. The woman who sold the tickets wandered around the benches, pouring hot water for the tea. She smiled at me.

As for the actors, they didn’t mind me being backstage, trying to squeeze between them to get shots. It’s not that they ignored me, they just went on with what they were doing, not taking any notice of me. 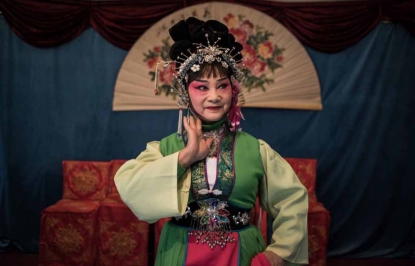 Striking a pose after the show. (AFP / Johannes Eisele)

'Now they're all gone'

Earlier one of them, the troupe’s 75-year-old founder Gao Qinying, told us she was worried about the future.

“I don’t think the group could survive another year," she said, saying the government should offer more support as the troupe’s audience literally dies off.

“Five old friends used to sit there together, they came and sat on the same spot everyday," she said, pointing to some back row seats.

"Now they are all gone.” 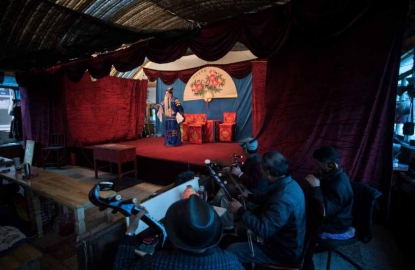 Once the show was done, the actors quickly changed back into their everyday clothes. Mr. He washed away his makeup with a towel, waved good-bye to his companions and rushed home. He would return the next day.

Stella and I walked down the stairs and back out into the din of the sprawling market. 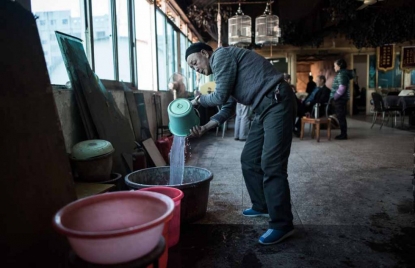 Mr. He cleans up after the show. (AFP / Johannes Eisele) 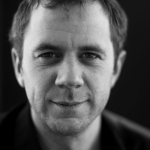 AFP photographer based in Shanghai
All posts
Next post

The walls that talk