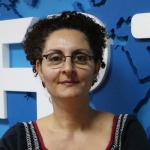 The death of George Floyd, just over six weeks ago, triggered a cultural and social earthquake in the United States, with several aftershocks, as Americans demanded an end to systemic racism. AFPTV covered protests in more than a dozen cities. Video editor-in-chief for North America, Jihan Ammar, and her colleagues  Salima Belhadj, Gilles Clarenne and Gianrigo Marletta write here about how the team operated, how the story impacted our journalists and sparked ethical debate in the newsroom.