A student attends a demonstration at the government headquarters in Hong Kong on September 27, 2014 (AFP / Xaume Olleros)

PARIS, October 2, 2014 - What caused the Soviet bloc to collapse? Historians are still arguing about it, but to my mind one of the biggest factors was, simply, West Berlin.

From its creation, West Berlin was a headache for the Kremlin. It was an islet of freedom, democracy and capitalism deep inside the grim and grey German Democratic Republic. It was the hole in the Iron Curtain.

From its giant three-pointed Mercedes star on the Kurfuerstendamm and the Axel Springer newspaper building next to Checkpoint Charlie to the TV and radio stations blaring out pop music, soap operas, chat shows, political debate and ads - every single message radiating from this enclave told East Germans that life in their Communist rump state was drab and repressive. West Berlin was the most subversive weapon in the West's armoury. Picture taken on April 29, 1984 of the Berlin Wall and the no man's land marking the border between East (Soviet sector) and West Berlin (American sector) (AFP / Joël Robine)

Unable to compete with this allure, the Soviet Union turned tough. In 1948, it tried to starve West Berlin into submission. A decade later, it demanded the western powers pull out, almost driving the world to nuclear war. Finally, in desperation, in 1961 it erected a wall around the city's western sector and shot East Germans who tried to climb over it.

That stopped the flow of people but at a suicidal cost. The Wall transformed West Berlin into a martyr to the Kremlin's villainy and a rallying point for the West -- and made its forbidden concepts and lifestyles even more appealing. The years came and went, and Communist rule over eastern and central Europe continued as if it would be eternal. But this was in façade only. Underneath, in the battle of ideas, it was game over.

In short, West Berlin was a channel by which foreign concepts and ambitions flowed among citizens under a repressive regime. It was a potent political irritant, a perpetual poke in the eye for dogma and control. By its presence, there was a tiny opening, an energising effect in the division of Europe -- something noticeably absent in Korea, whose division looks far more stagnant and enduring. 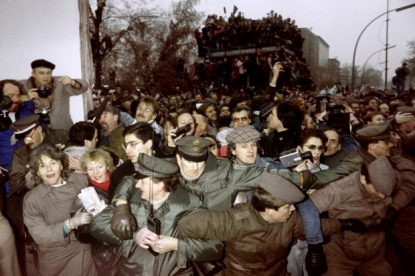 East and West German Police contain the crowd of East Berliners flowing through the recent opening made in the Berlin wall at Potsdamer Square, on November 12, 1989 (AFP / Patrick Hertzog)

Berlin's special role in history leapt back to my mind this week as I saw the extraordinary scenes from Hong Kong. Tens of thousands of protestors have occupied strategic streets to demand that the former British territory, granted widespread autonomy under the 1984 Sino-British handover agreement, have unfettered democracy.

There are of course plenty of reasons to say Berlin in 1989 and Hong Kong in 2014 are not comparable, yet they share intriguing similarities.

Enclaves, by the quirk of history that made them, are usually special places with a specific identity, often owing more loyalty to themselves than to the country that lays claim to them. Thousands of young East Berliners crowd atop the Berlin Wall, near the Brandenburg Gate on November 11, 1989 (AFP / Gérard Malie)

Both West Berlin then and Hong Kong today have a citizenry that is resilient, resourceful, educated and politically mature -- unwilling to swallow a political system crafted in the age of paternalism. In both cases, many citizens (or their descendants) fled repression in the hinterland and have little love of the authorities in the country they left.

In particular, both became vehicles for ideas that ponderous, control-minded governments loathe.

When it was isolated from mainland China, Hong Kong was a distant issue for Beijing. As a Special Autonomous Region (SAR), it became part of China's landscape, intertwined in business, personal ties and cultural contacts. Freedom of speech and assembly are among the expectations Hong Kong has helped to stoke, spread through friendships and family ties, the Internet and millions of visits to the territory by mainlanders. 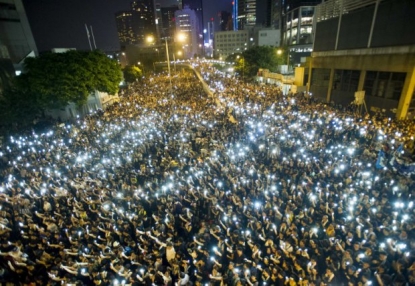 Protestors and student demonstrators hold up their cellphones in a display of solidarity during a protest outside the headquarters of Legislative Council in Hong Kong on September 29, 2014 (AFP / Xaume Olleros)

Back in 1984, "One Country, Two Systems" must have seemed a neat idea. Today, seen through the prism of Bejing hardliners, China and its noisy SAR are simply not separate enough. There is only a permeable membrane that allows challenging or even dangerous notions, contacts or activities to travel across and spread.

If, for these voices, Hong Kong is now a viral source that infects the main body, the question is how to respond.

Is the agitation there really such a threat to the Communist Party? Can it be tolerated or ignored, its energies channelled in a different direction? Or should it be walled off, even drowned out? As West Berlin showed, the price for this would be stratospheric. Is it a price China would be willing to pay?

Richard Ingham covered the fall of the Berlin Wall in 1989 and the handback of Hong Kong to China in 1997. 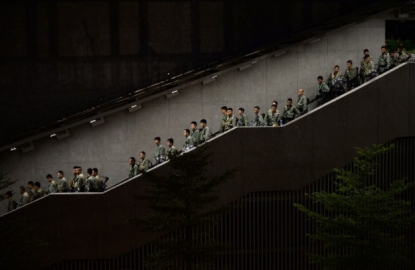 Police walk down a stairwell as pro-democracy demonstrators gather for a rally outside the Hong Kong government headquarters on September 29, 2014 (AFP / Dale de la Rey)