Bahraini women mourn during the funeral of Sayed Mahmud Sayed Mohsin (portrait) in Sitra on May 24, 2014. Mohsin, 15, was reportedly shot dead by security forces during an opposition protest (AFP Photo / Mohammed Al-Shaikh)

At the heart of Bahrain's unrest

DUBAI, October 11, 2014 - Photographer Mohammed Al-Shaikh received on Saturday, October 11 a Bayeux-Calvados prize for war correspondents. The independent 40-year-old photojournalist, who has worked regularly with AFP since 2011, was awarded for his coverage of violent protests in Bahrain. The tiny Gulf kingdom has been deeply divided since it was rocked by protests led by the Shiite majority in 2011 calling fordemocratic reforms, namely a constitutional monarchy.

What are the main difficulties you face as a photojournalist in Bahrain, which has been rocked by Shiite-led protests since 2011?

The difficulties are twofold: there are the police and the protesters. Some of them understand the nature of our work but others don'tand as a result they can be aggressive. Usually this is verbal but at times the aggression can be physical. But lately things have begun to change -- it is asif everyone understands the nature of a journalist's work -- and there are fewer incidents. Bahraini women throw wood onto a fire during clashes with and riot police following a protest in the village of Al-Maqsha, west of Manama, on April 25, 2014 (AFP / Mohammed Al-Shaikh)

What was the most dangerous situation you faced?

I was in the (Shiite) village of Diraz one evening, positioned across from a group of policemen. It was totally dark. They openedfire at me with a hunting rifle locally known as 'Shozen', a word derived fromthe English word 'shotgun'. I was shot in the foot. They thought I was aprotester. After I was hit they realised that I was a photojournalist. I couldhave been killed. We don't normally wear flak jackets because they are notnecessary. The security forces don't usually use live rounds. A Bahraini protestor stands amidst tear gas fired by riot police during clashes following a protest against the ruling regime in the village of Diraz, west of Manama, late on July 25, 2013 (AFP Photo / Mohammed Al-Shaikh)

What is your favourite subject ?

But here in Bahrain, women had a lead role although thesociety is very conservative. Women take to the streets in large numbers andare key in making sure that everyone knows where and when protests are takingplace. They also prepare hand-made banners. A Bahraini woman poses for a picture during an anti-government rally in the village of Abu Saiba, west of Manama, on August 23, 2013 (AFP Photo / Mohammed Al-Shaikh)

Has the protest movement in Bahrain taken over otheraspects of life in your country?

There was huge interest for pictures showing the protestsin Bahrain, especially in the two years that followed the first demonstrationon February 14, 2011.

But life in Bahrain does not stop there. Unfortunatelythe protest movement eclipsed everything else: people's everyday lives, societyat large. I think there is now room to work on new topics. A Bahraini protester holds stones during clashes with riot police following an anti-regime demonstration on December 3, 2013 in the village of Sanabis (AFP Photo / Mohammed Al-Shaikh)

How do you feel about winning the Bayeux Prize?

It was a dream that I had not expected to come true.Those who won the prize before me, like James Nachtwey, are an example for me.They have more experience and have done magnificent work.

It is an honour, a great honour to be awarded this prize. 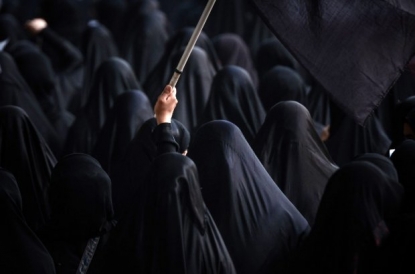 A woman waves a flag during the funeral of Sadeq Sabt, in the village of North Sehla, west of Manama, on September 1, 2013. Sabt, 22, died of his injuries after he was hit by a vehicle during a protest a month before (AFP Photo / Mohammed Al-Shaikh)

How has AFP helped you to develop your work?

AFP and the editors I have worked with have played anessential role in my professional life. The interaction I have with editors hashelped me to better understand what the world expects from a photographer in mysituation and how essential quality is. I also learned to understand theirreaction to the pictures.

My whole approach to photography has enormously changedsince I began collaborating with Agence France-Presse. 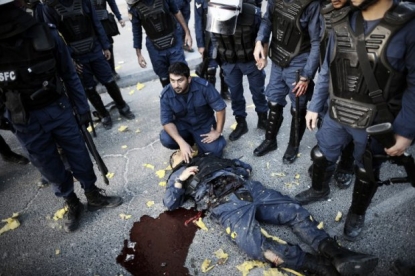 A Bahraini police man helps an injured comrade after a bomb exploded during clashes between protesters and security forces on March 3, 2014 in the village of Daih (AFP Photo / Mohammed Al-Shaikh)
Next post