Migrants arriving from Greece walk on a highway near the town of Veles on their way to Macedonia's border with Serbia on June 9, 2015 (AFP Photo / Robert Atanasovski)

Cycling to a better life

SKOPJE, June 11, 2015 - We have our fair share of problems here in Macedonia. The country is in deep political crisis. There are violent tensions between the Slav majority and the large Albanian minority. Alongside this another crisis, a humanitarian one, is playing out day by day on the main road running north to south through the country, along the Vardar valley.

For thousands of destitute people, the road is a passageway towards what they hope will be a better life in one of the countries of the European Union. They come from Syria but also from Afghanistan and elsewhere, driven out by war, poverty and violence. 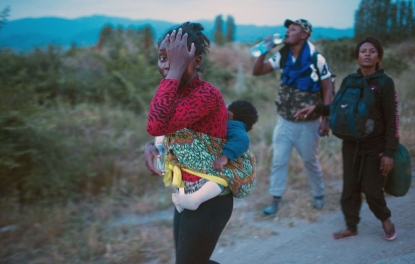 Migrants walk near Demir Kapija, on the way to the Serbian border on June 10, 2015 (AFP Photo / Robert Atanasovski)

Most arrive here from Greece - itself an EU member but one in the throes of a grave economic crisis that has affected migrants as well as the Greek population itself. Most of them are trying to reach Germany, seen as offering the best chance at rebuilding their lives. But first they need to cross Macedonia, then Serbia. The number of migrants recorded at the Serbia-Hungary border - an entry point to the EU’s free travel area - more than quadrupled between 2012 and 2013, according to the Frontex border agency.

In Macedonia, undocumented migrants are not permitted to use public transport. The authorities ban rail or bus companies from selling them travel fares. They are, however, allowed to walk to their destination. There is little logic to the system - mostly the product of Macedonia’s muddled legislation on foreigners, which is due to be updated in the near future. 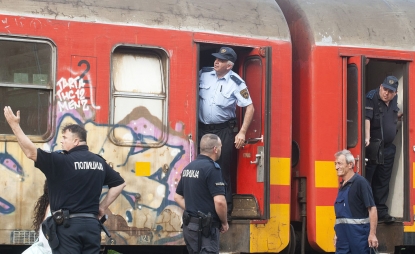 Reading the local papers recently, I discovered that some of these migrants had found an unusual way to get across Macedonia - by bike. I was curious to find out more, so I set off to see for myself.

In Demir Kapija, a town a dozen kilometres from the Greek border, a whole new line of business has sprung up out of nowhere. For 150 to 200 euros, migrants who can afford it can acquire a bike. Word of mouth has made this an increasingly popular travel option for migrants reaching the country. 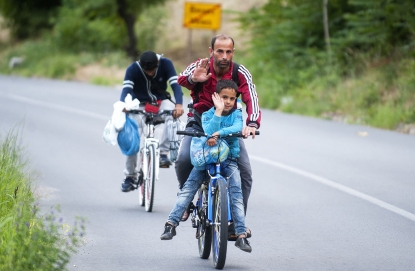 A migrant and his son ride a bicycle on a highway near the town of Veles on June 9, 2015 (AFP Photo / Robert Atanasovski)

From those who made the journey before them, the migrants know that once they pass the Greek-Macedonian border on foot, they will be able to find bicycles to continue their journey - strapping to the bike rack the backpack containing what possessions they have left. Many of them settle their children up on the bikes, and walk beside pushing them along.

Most of these migrants are easy to approach. They are happy for me to photograph them, they smile and chat with me. They share the sad stories that drove them from their homeland. 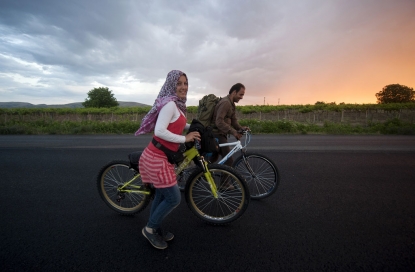 Of course most of them have no idea that the country they are crossing is in the grip of a political and ethnic crisis of its own.

They have other concerns. The road is long and dangerous. Two months ago 14 migrants, Somalis and Afghans, perished after they were hit by a train travelling from Greece. They had paused to rest on the tracks, in a place near Veles south of Skopje, where the rail line runs through a narrow canyon with a cliff on one side and a steep drop on the other. They had nowhere to hide. 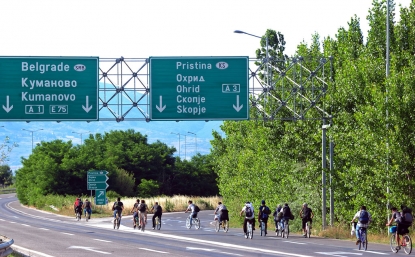 The Macedonian police turn a blind eye to these migrant cyclists and pedestrians - preferring to focus their efforts on people-smuggling networks. Macedonia is on the so-called Balkan road used to traffic everything from human beings to drugs and weapons.

The cycling migrant phenomenon has reached fairly significant proportions. Hundreds of them can be seen each day winding up the Vardar valley. Once they reach Kumanovo in the north of Macedonia, they abandon their two-wheeled rides and continue on foot the short remaining distance to Serbia. A bike becomes a burden when you are trying to pass the border unseen, along small paths.

Rumour has it that the bicycles abandoned in Kumanovo are gathered up and ferried back to Demir Kapija, to be sold on to the next wave of clandestine migrants arriving from Greece. Never under-estimate the entrepreneurial spirit of your typical Macedonian…

Robert Atanasovski is an independent photographer and regular AFP contributor based in Skopje. Text written in collaboration with Jovan Matic in Belgrade. 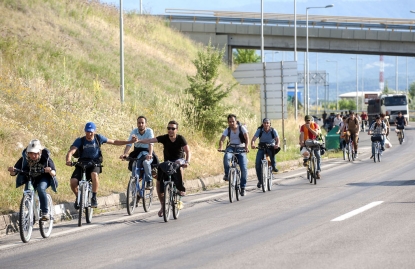 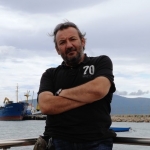 AFP photographer based in Skopje.
All posts
Next post