China grapples with the 'devils' of its past

Around them stood a dozen middle-aged women, wearing red berets and carrying plastic machine guns -- and a few others wielding pirate-style imitation swords. With no options apparently remaining, the green helmeted troops from Tokyo raised their hands in surrender -- but their humiliation wasn't over.

An orchestra played a upbeat march as the gun toting women led the Tokyo troops in a circle and confiscated their weapons -- which had also been supplied by a local toy store.

The scene enacted on Monday (July 7) by a dance troupe in Beijing had overtones of farce. But it came on a serious date -- 77 years after events which launched a long and savage war between China and Japan, causing millions of Chinese deaths. For this year's anniversary, China's state-media went into overdrive to push the message that Japanese aggression should never be forgotten -- with the unmistakeable implication that Tokyo and current Nationalist-leaning Prime Minister Shinzo Abe, remain a threat.

"Never forget national humiliation," insisted a red banner behind President Xi Jinping, as he spoke at a rally -- naturally, shown live on state-television -- to mark the date.

It is a message rammed home in Chinese history textbooks, which emphasise China's 19th century invasion by Western powers and war crimes committed by Japanese troops -- with the ruling Communist party cast as the only force capable of resisting foreign enemies. Naturally, millions of deaths caused in the 1950s and '60s by Communist party rule barely feature.

And it's hard to overemphasise how omnipresent the war is on Chinese televisions -- where broadcasters pump out dozens of dramas about wily Chinese soldiers defeating evil Japanese troops every year.

So it did not seem strange to the mostly middle-aged members of the Beijing Nanguan Art Troupe, who dance every evening outside the towering glass fronted Raffles Mall in central Beijing -- to incorporate a spot of Japanese soldier hunting into their routine. Chinese women dressed up as the Women's Detachment of the Red Army accept the surrender of a Japanese soldier during a different performance in Luanchuan, central China's Henan province. (AFP Photo)

I joined dozens of other spectators -- some weighed down with fresh shopping bags, and a scattering of construction workers, who stripped off their vests in the evening heat -- to check out the show, which had also received heavy state-media coverage ahead of the anniversary.

I flinched a little when one of the female dancers, or "aunties," as the Chinese media affectionately named them, crouched down and stared seriously down their gun barrels, lining up passing shoppers in their sites.

As a foreigner -- even as a European -- I was a little nervous about approaching the troops once the show ended after a backbreaking two hours, where the nationalist gauge had registered pretty high.

But once they put their plastic weapons in a pile, the soldiers couldn't have been friendlier. 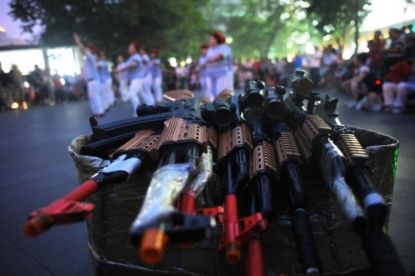 'Pride in beating the devils'

"We hold guns and shoot the devils, only our dance troupe does that," said group leader Dai Ping, 52, using a common pejorative for invading soldiers.

"That's for the 7/7 anniversary, of when little Japan was invading China," she added, employing a common derogatory nickname for the country. "We added more military-themed dances with guns."

Curiously, a banner above the streetside performance area said the troupe was sponsored by a state-run bank, but Dai insisted that they had paid for the Chinese flags, rifles and striped uniforms themselves.

"You have a pride in your nation, beating the devils," she added, as a nearby drummer picked up a cast-off rifle.

Dance troupes made up of middle aged and elderly people are a common and generally charming site on Chinese streets where locals meet to exercise and make friends.

And there was a comic-book quality to the performance which I warmed to more than the sombre words delivered that day by Xi Jinping, who most of the troupe had apparently not bothered to watch on China's notoriously tedious state news channel.

"Its about exercise, and having fun -- its not political," Zhang insisted.

A Chinese man shows a full-page advertisement with the title "Japan wants a war again" in a local newspaper, in southwest China's Chongqing. (AFP Photo)

The Japanese-war themed dances made up less than a quarter the entire performance, which included imitation Tibetan dance, and a rendition of 1950s propaganda classic, "without the Communist party, there would be no new China."

For the troupe, hatred for Japanese invaders seemed to be part of a repertoire of images and memories -- like old propaganda tunes -- which could arouse emotion in the present, but seemed almost comically remote from more pressing concerns of how to get by in contemporary China.

And despite rapid and sometimes alienating change in the country, the troupe could rely on the fact that they held those images and memories in common -- almost like 1960s pop songs to their Western equivalents.

Chinese attitudes to Japan can be schizophrenic. Japanese products are often preferred by shoppers for their high quality, and tens of thousands of Chinese tourists make the trip across the East China Sea every month for a taste of a culture that many - citing clean air, cleanliness and immaculate queues -- say is more "civilised," than their own.

But tensions have recently risen between China and Japan over disputed islands, with planes from both sides playing dangerous cat and mouse games over the East China Sea.

Few seriously expect a repeat of the past, but some worry that a miscalculation by one or other side could spark conflict.

Compared to that prospect, the glimmer of plastic rifles on the streets of Beijing seems a lot more like fun. Back to Normandy: Photographing WWII heroes