The winners for 2020 were dominated by Hong Kong’s protests, which raged for six straight months, upended the financial hub’s reputation for stability and left deep ideological scars that remain to this day.

In Wallace’s award winning series, multiple photographs were taken during the most intense stage of the protests in November when hundreds of demonstrators battled riot police on the besieged campus of Hong Kong Polytechnic University.

Here Wallace, 41, details how these remarkable photos were taken: 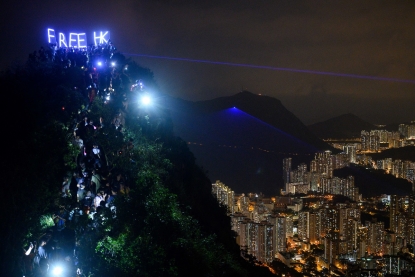 Pro-democracy activists hold up LED lit letters which read Free HK as others shine torch lights, lights from their phones and lasers while forming a human chain on Lion Rock in Hong Kong on September 13, 2019. (AFP / Anthony Wallace)

During this kind of all consuming story it’s important to keep a sense of perspective and avoid tunnel vision.

You can easily become absorbed by the intensity of the moment, the dramatic action unfolding right in front of you.

But you have to keep an eye out for what is happening all around. 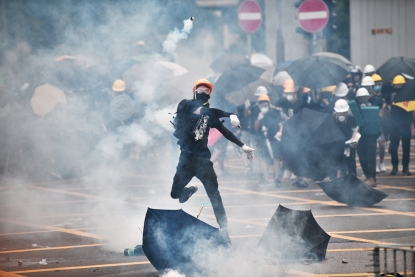 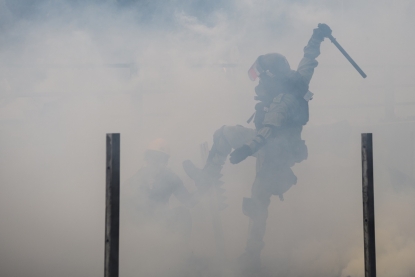 It’s not just about staying safe. Sometimes a sudden moment of calm on the sidelines can be just as meaningful a photograph as the clouds of tear gas on the frontlines.

I’m the only staff photographer in AFP’s Hong Kong bureau. But we brought in over a dozen text, video and photos colleagues -- as well as local freelancers -- to cope with the sheer deluge.

Everyone coordinated closely to make sure our teams were in the right place at the right time for what often became a 24 hour news story.

There was so much emotion and drama pulsing through the streets, it was difficult not to return each day with powerful images. 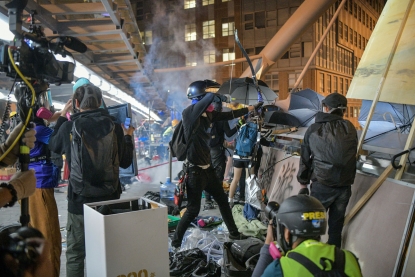 Hundreds of mostly young protesters, some armed with bows and arrows and petrol bombs, had barricaded themselves inside the Polytechnic campus and were surrounded by riot police.

On the second day of the siege I heard that some 200 protesters were going to try and break out together.

Authorities had declared the entire campus a “riot zone” which meant anyone present could be charged with rioting, whether they were armed front liners or non-violent activists who had found themselves trapped.

The mass breakout attempt descended into chaos as police fired volley after volley of teargas.

For a while I couldn’t see a thing through my mask. A photographer friend and I were pushed to a corner with the crowd of protesters trying to escape.

When the clouds dissipated, I saw multiple arrests had taken place.

One man who caught my eye was completely oblivious to the blood streaming down his face. I think he was in shock and just exhausted. 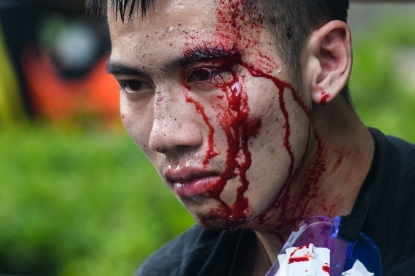 As journalists our duty is to document but we must not get in the way. I switched to a long lens to keep my distance and shot a series of frames.

On a breaking story like this we file from the field and need to make quick editorial choices.

I initially chose three frames, with a wider shot at the start. But in the end I cropped heavily on the man’s face.

At the time I thought: “This guy’s expression is the story. Whoever looks at this image needs to see this close up.”

That evening I was with some other photographers when my video colleague Ayaka McGill called me from another part of the campus.

“You have to come now,” she shouted.

Ayaka pinged her location by Whatsapp allowing Myanmar photographer Ye Aung Thu and I to rush there.

The bridge was crackling with energy as protesters ran in different directions. Ayaka showed us to a railing where people were using ropes to shimmy down onto the road below. 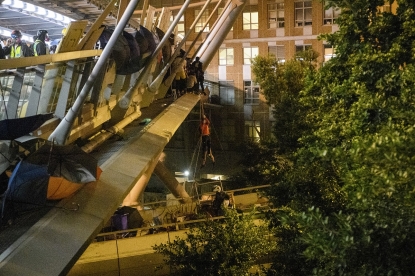 The scene was a mixture of courage and sheer desperation, as some looked over the edge unable to bring themselves to make the descent.

Few of those sliding down the ropes had gloves and some fell. I later learned some broke their legs and had the skin torn from their hands.

The escape was clearly coordinated as a convoy of motorbikes had gathered on the highway below to ferry their comrades away.

But police soon worked out what was happening and the ensuing volleys of tear gas cut off any further escapes. 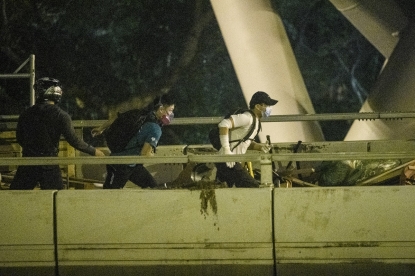 It’s during these moments that AFP’s photo editors are invaluable.

Sometimes you don’t have time to execute a really careful composition or send captions.

The shots are sent to our servers in real time via a wifi device and it’s the photo editors who find the best crop while respecting your style. 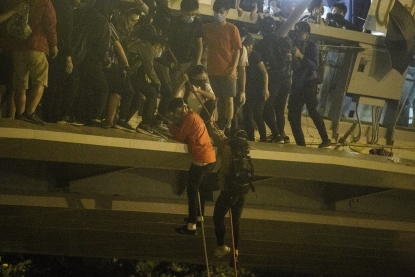 That night, the photos went to an editor in Paris. But it could just have easily been Hong Kong, Delhi, Bangkok or Washington coming to our rescue.

Honestly without them we wouldn’t get half our shots onto the wire. And yet they are never recognised by journalism prizes. 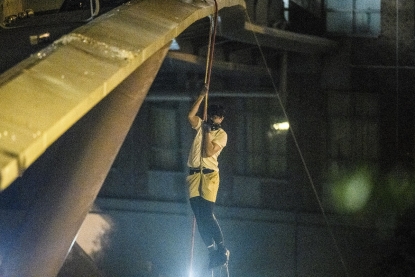 For the first few nights, we slept wherever we could on the campus as it was difficult to leave with all the police checkpoints and you were never sure you’d be able to get back in.

Initially we rationed our food and water before fresh supplies came in from other photographers.

In the early hours of the next morning -- not long after the bridge escape -- we began noticing small groups of people peering down into open manhole covers. 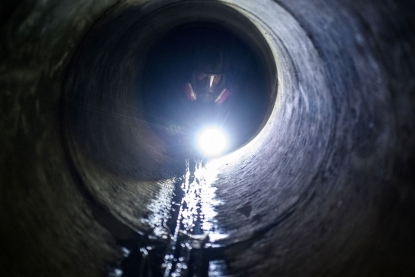 It was obvious what they were thinking of doing and I knew this was something that had to be documented.

I followed one group down into the pipes below. I wanted to feel what these people were going through and to document their journey into the unknown. 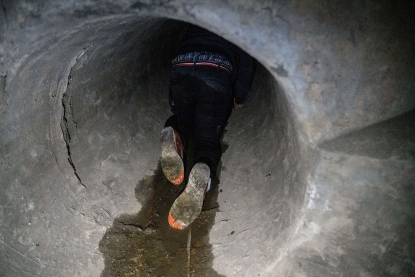 The air inside was stifling, so dense it felt like crawling in a sauna. The strong stench of sewage fumes penetrated my full face gas mask.

I saw a young man clutching a torch as he crawled towards and then past me, down different manholes, looking for ways out.

After shooting a few frames in the darkness I headed back up, grateful for the fresh air.

Later we came across a group who had turned back after struggling to breathe. It was just too big an ordeal for them to go through. 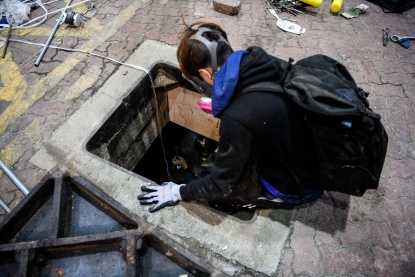 Some agreed to be evacuated by medics, others ventured back down and we later learned many people did manage to escape that way.

Later that night, another photographer came to tell me that a small group of protesters who had turned back from the sewers were gathered in the hallway outside our makeshift sleeping area.

They were exhausted and covered in effluent. One of them had cut her arm while crawling in the pipes and was trying to find something to clean her wound. 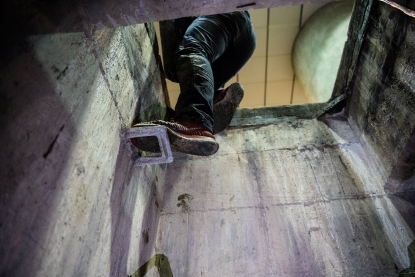 It often amazed me how youthful some of the protesters were once they removed their masks and goggles, many of them teens or in their early twenties. 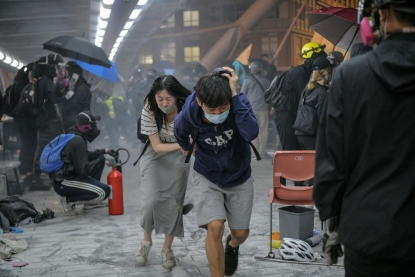 It was one of those moments where as a photographer I just didn’t want to take the shot, it felt like an intrusion.

The group left brown footprints on the floor with their bare feet.

The prints stayed there for days afterwards and everytime I walked past I wondered what had happened to them.

This blog was written with Michaela Cancela-Kieffer in Paris and Jerome Taylor in Hong Kong. 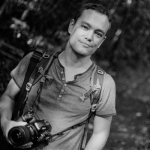 Photographer based in Hong Kong.
All posts
Next post

Love and fear of dying in the time of coronavirus