ALEPPO, Syria, December 5, 2014 - What a strange and wonderful job we do. Before arriving somewhere new, you read all you can get your hands on to start shaping a view of the place – and when you get there, the reality is something else entirely.

I had imagined Aleppo to be like Berlin at the end of World War II – smoking ruins, with haggard people stumbling through a ghostly silence. Instead I found myself back in Beirut during the civil war – where life and death, buzzing cafes and snipers, exist side by side. 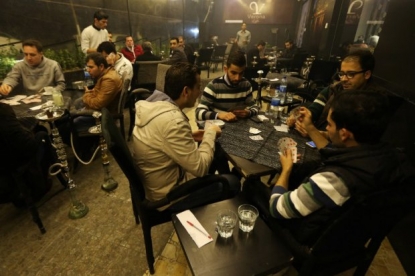 Syrian men play cards at a cafe in the Mogambo neighbourhood on the government-held side of Aleppo on November 15, 2014 (AFP Photo / Joseph Eid)

First, the road there. Before the war, it took four hours to cover the 350 kilometres of highway from the Syrian capital Damascus to Aleppo. Now it takes six or seven hours –a tortuous 440-km route with diversions all along the way.

If you’re arriving from the government side, you have to travel along tiny, winding roads to avoid straying into the rebel zone. Getting lost is not option –a wrong turn could see you cast into a sordid dungeon, tortured to death or beheaded.

To make matters worse, some deserted villages have changed hands several times – their walls covered in layer upon layer of victory slogans, daubed by the rival sides.

« The Tiger’s army » -- nickname of a notorious loyalist commander -- is scrawled over the jihadist flags of the Islamic State (IS) and Al-Nusra Front groups, and their rallying slogan “Freedom for us, hell for the Alawis”, President Bashar Al-Assad chief among them.

After passing close to 30 checkpoints manned by the army, police and various security services we reach Aleppo, Syria’s one-time economic capital – a city maimed but still very much alive. 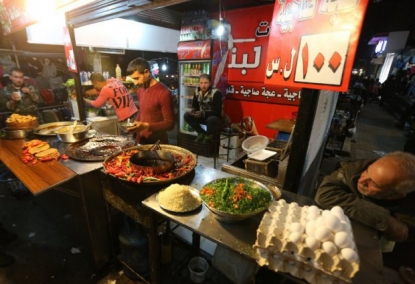 And there, suddenly, I am back in 1980s Beirut. A city sliced in two. West and east Aleppo, with a demarcation line running from north to south, and a historic centre – the pearl of the city – ravaged as the Lebanese capital was back then.

In Lebanon the city was split between a Muslim-majority sector and another that was mostly Christian. In Aleppo the divide is not religious but political, between the rebels and the regime. 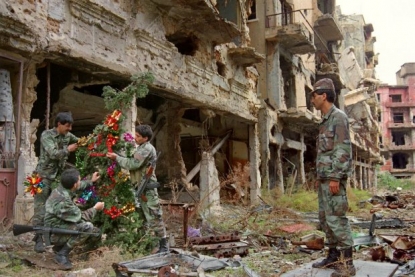 In Beirut, there were more-or-less safe crossing points between the two sides, opening and shutting depending on the mood of the fighters, and the snipers posted overhead. On some days, cars were allowed across. On others you could only pass on foot.

In Aleppo the dividing line is sealed shut. It takes a full 11 hours to get from one side to the other, on a minibus driving through territory controlled by Islamic State jihadists.

Lastly, in Beirut there were no air raids. The fighters could fire devastating 155 mm shells at each other – but there were no barrel bombs dropped from government aircraft.

Apart from that, the echoes between the two are unsettling. 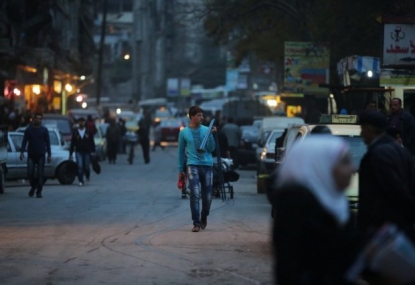 Syrians shop in the al-Midan neighbourhood on the government-held side of Aleppo on November 16, 2014 (AFP Photo / Joseph Eid)

The traders of Aleppo’s city centre – like those of Beirut – have been forced to abandon their historic souks– burned or reduced to rubble.

Once-proud businessmen are reduced to the status of peddlers, touting wares from behind street stalls. Famous antique dealers have turned to selling fruit and vegetables. Goldsmiths flog costume jewellery on the cheap, fashion designers make do selling out-of-style clothes, and restaurateurs dole out their falafels and honeyed sweets on the sidewalk.

Like in Beirut the demarcation line is a scar sliced across the city. Buildings are pocked with bullet holes, or gutted by shelling, balconies have been blown off, there is hardly an intact window pane in sight, and rooms in the firing line of nearby snipers have been walled off. 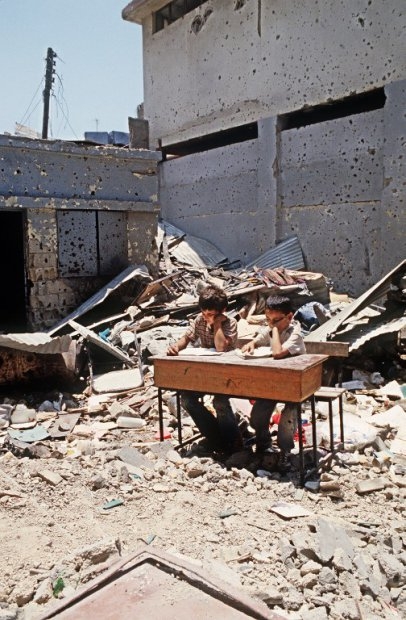 Palestinian children study in the courtyard of the school of the refugee camp in Shatila,near Beirut, 23 June 1985. (AFP Photo / Joel Robine)

It always surprised me –both in Beirut and Aleppo – that people stay put, despite levels of danger that turn everyday life into a Russian roulette. You can leave home in the morning and never make it back. Of course the standard answer is that people have no place to go. But I think that once you have got past the initial fear, living with danger becomes a kind of drug – and your home in the midst of it becomes a paradoxically comforting place.

After the end of the war in Beirut, I know people who looked back with nostalgia at that time when life was lived so intensely –hanging by a thread – and whole neighbourhoods pulled together in a warm supportive community. 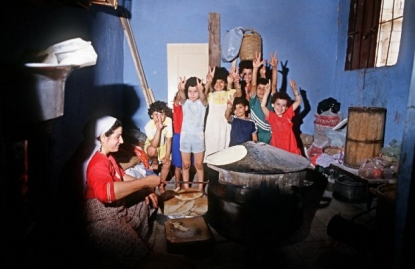 In wartime, the abnormal becomes the norm. One day in Beirut a friend told me his young son had woken up crying – frightened by a storm. He comforted him by pretending it wasn’t the sound of thunder, just shellfire – something the child had been accustomed to since birth.

Another strange common truth is how distances grow in the mind. West Aleppo can seem terribly far from east Aleppo, even though in places they are less than 50 metres apart.

Each side is utterly ignorant of how people live on the other, as if they were different planets.

During the civil war, I lived in west Beirut – a fact that astonished people I spoke to on the other side. “But can you got out?” Of course. “Don’t you get arrested.” Not at all.  “Are there restaurants?” Absolutely! “I don’t believe you – it can’t be true.” As if the city’s population had become schizophrenic. 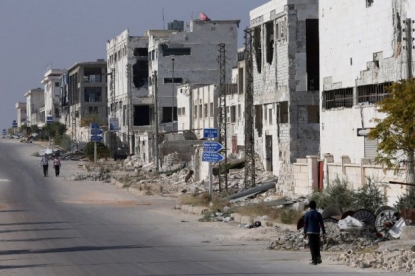 In Aleppo as in Beirut, the most astonishing is how people keep going despite it all.

No power supply? We’ll use generators. No water ? Let’s dig a well. In the areas furthest from the demarcation line, the cafes are packed, with crowds spilling onto the pavement, and local nightclubs are full of punters drinking and dancing the night away.

“It’s true,” a doctor in Aleppo told me, “people’s ability to keep on living is amazing. That’s positive because it shows us the urge to live is stronger than death. But it’s terrible at the same time, because it means you can inflict the worst on people, and they will accept it.”

I heard almost the exact same words, 25 years ago in Beirut.

Sammy Ketz, AFP's bureau chief in Beirut in charge of covering Syria, travelled to Aleppo from November 15 to 19, 2014. He also lived in the Lebanese capital during the civil war, from 1982 to 1988. 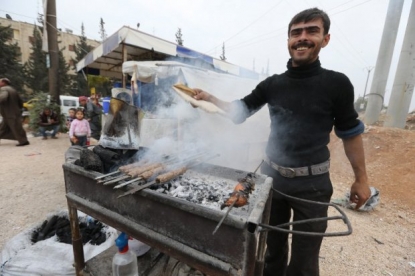 A Syrian man prepares traditional kebab on a street on the government-held side of Aleppo on November 16, 2014 (AFP Photo / Joseph Eid) 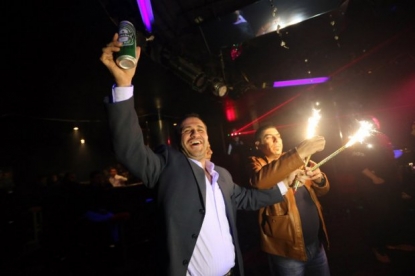 Syrians dance at a night club in the government-controlled part of the northern city of Aleppo on November 15, 2014. (AFP Photo / Joseph Eid) 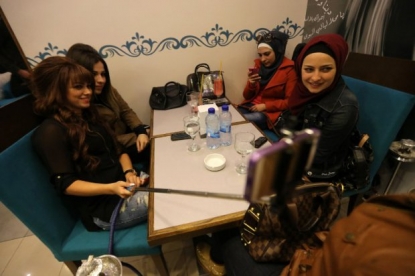 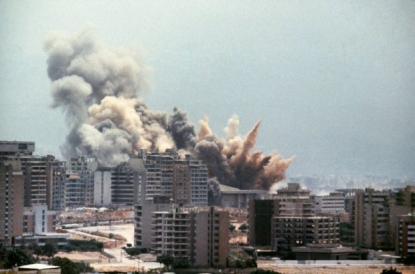 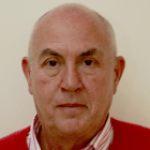 Brawl at the Hall

No frills at Victoria's Secret