Beirut, April 6, 2016 -- As a photographer, it’s a waste of time to sit in the office in front of a computer, answering email or talking on the phone. You have to constantly be out there looking for images. You can’t just wait for things to happen.

You also can’t depend on luck as a pro. You have to go looking, you have to make your luck. That’s how I found my images of Batman and Superman. It was completely by accident. But I had been looking.

I moved to Beirut in September of last year. Since then, I spend my time walking the streets of the city with my camera. It's easier to get around that way because of all the traffic jams. If I were in a car, I'd be spending my time sitting in traffic, or getting in and out of the car every time I wanted to stop.

I also rely on shared taxis because there isn’t a functional transportation system in the city. But having my equipment out with me when I take a shared taxi is not always prudent. I don’t have a bike either, but Beirut is not the most bike-friendly city. So I stay on my feet most of the time. 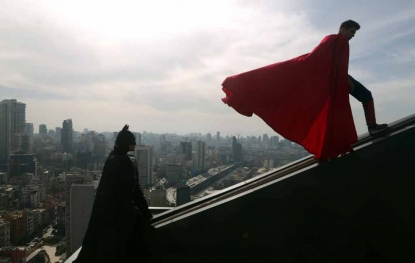 That’s how I stumbled upon Mario Chiha, who’s dressed as Superman in the photos, and his group of friends. It was totally unexpected. I went out right after lunch, an afternoon where I didn’t have much to do.

A while back, a group of young people decided that the image that most people have of Lebanon as a war-torn country wasn't accurate and set out to dispel it via a social media media campaign that they named @livelovebeirut. So they created a website, along with accounts in Instagram, Facebook and Twitter, where they post positive images and stories of their country.

That particular afternoon Mario and his friends were getting ready to shoot a campaign for @livelovebeirut for the Grand Cinemas entertainment brand in Lebanon that was about to premiere the "Batman v Superman: Dawn of Justice" blockbuster, which pits the two superheroes against each other and which has been scoring at the box office if not with the critics. 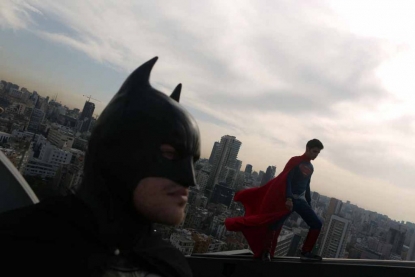 We sometimes forget that Beirut is just like any other city in the world. It’s a city that is alive with more than we can imagine. We have to move past defining the country with the wars that started in the 1970s.

People say Beirut reminds them of Gotham City, where the Batman character lives. When you look at the photos that I shot of the two comic book heroes, with the skyline in the background, it does sort of look like it. Who would have ever imagined Batman and Superman in Beirut? Definitely not me. So it took me completely by surprise when I ran into them during the course of my walk. I basically just approached them and told them who I was. They were as delighted to meet me as I was them. 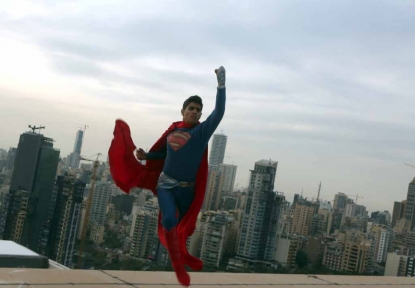 Mario is somewhat well-known in Beirut. He’s an acrobat and a stuntman. You can google him and all kinds of crazy stunts he’s done will pop up. So there he was, just having fun with his friends while they were shooting this campaign in the street. Since they all have a lot of connections, we had no problem getting on the roof of a building. They were already preparing to shoot, but the fact that I was a professional photographer made it even better for them.

We went up on a roof and since they’re basically just kids, they started performing all these crazy stunts. I was so afraid. I kept telling them to be careful as I was shooting my images. There were a few times when Mario scared me so much I had goose bumps. There were several times I really had to pull them back from the edge. I felt like the grumpy old man, the dad. But it all worked out really well. They knew what they were doing and what they wanted. The only thing I struggled with was to make sure the light was just right for the photos. 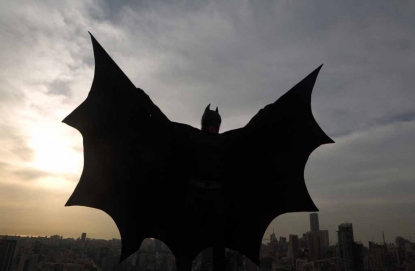 I wish I could have captured Batman and Superman on the metro or near a train. That would have reinforced the image of Beirut as Gotham. I mean, Beirut is not any more dangerous than Gotham, if you think about it.

These kinds of images are the ones I’m always looking for. These sort of photos, of city life, of society, work really well. You can tell because the photos were splashed in The New York Times and The Washington Post. That caught all of us completely by surprise. Mario and his friends were so excited. They were like, “Yeah, we made it!” 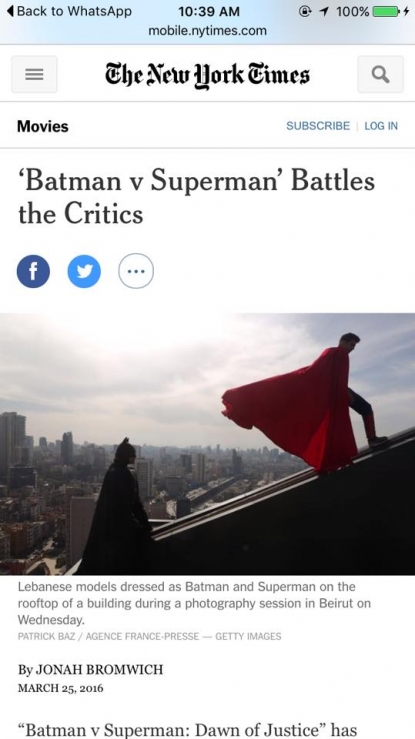 The whole point of the @livelovebeirut campaign is to show a different side to the city. And cinema is a big part of the culture here. Now that I no longer chase wars, I’m invested in documenting Lebanese society. I’m always in search of cultural and daily life topics. Those are the topics that interest people, much more so than photos dealing with politics or war.

I think Lebanon and Beirut are the perfect places to explore them. I always say that even though Lebanon is such a small country, it’s home to all kinds of people: from the Taliban to the Chippendales. Beirut is an exotic city full of contradictions. Every day, you find something completely different. There is something for everyone, and that’s fascinating for a photographer. 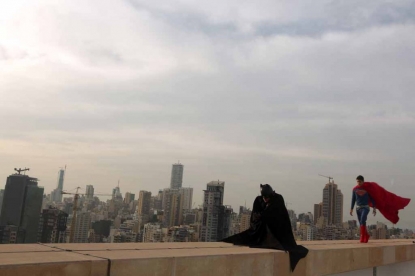 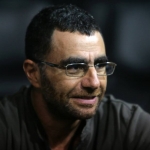 Photojournalist based in Beirut. Have covered all major Mideast conflicts, as well as those in Afghanistan, Bosnia and Somalia.
All posts
Next post