The words the pictures didn’t tell

Douchy-Les-Mines, France -- Sometimes a picture doesn’t tell the whole story. Take my photos of when police broke up a blockade at the Douchy-Haulchin oil refinery in northern France. The pictures could suggest a violent clash between the demonstrators and police. The reality was a bit different.

The blockade at the refinery was part of nationwide protests against labor reforms that the government has pushed through parliament. The reforms are aimed at loosening France’s famously rigid labor market by making it easier to hire and fire workers. The government, desperate to reduce the country’s unemployment rate of around 10 percent, argues that businesses will hire more people if they know they have this flexibility.

But opponents contend that the new laws are too pro-business. Strikes against government actions are part of the national fabric in France, they happen on a regular basis here.  And many consider labor laws, which are rigid in favor of workers, making it hard to fire someone, as sacred. So the unions have been holding demonstrations and strikes for months to protest the new legislature. 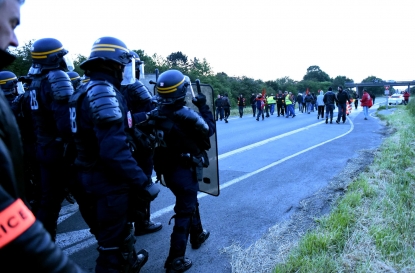 This week, the stakes were upped when protesters blocked refineries and fuel depots, and workers at nearly all of the country’s nuclear power stations -- which supply 75 percent of the nation’s electricity -- also voted to join the strike.

The blockades of the refineries have resulted in long lines at petrol stations across the country and have forced the government to dip into strategic fuel reserves.

At Douchy, the protests had been going on since last week. On Tuesday night, rumors began to fly among both journalists and protesters that police were going to try and break up the blockade at sunrise the following day. In northern France, a fifth of petrol stations had run out of fuel after panic buying, lines were also forming at gas stations in neighboring Belgium, so the government had vowed to unblock a few refineries across France. 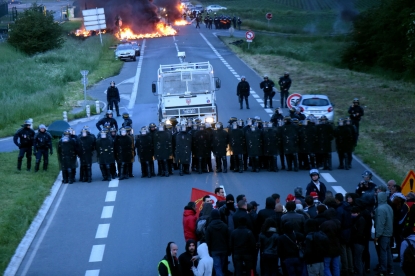 I live near the refinery so was one of the first photographers on the scene on Wednesday morning, around 4:00 am. Some 80 protesters were manning the roadblock in front. They’d been there, day and night, for six days now. They had a plan for when the police arrived -- they intended to set on fire the tires littering the road and then disperse to avoid further trouble.

The police arrived a little after 5:00 am, dressed in riot gear and armed with water cannon. A few days earlier there had been clashes with protesters so the police were ready for anything. But on this morning, there was no troublemakers among the protesters, just union rank and file who did what they planned to do -- set the tires on the road on fire. 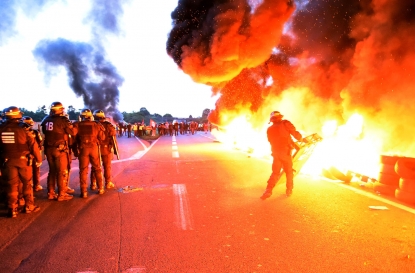 The resulting blaze was impressive. The police forces advanced slowly. The protesters pulled back. I had no problems going from one side to another to take my pictures -- I’m a local and had as many friends among the police as I did among the demonstrators. Besides, noone was acting violently. 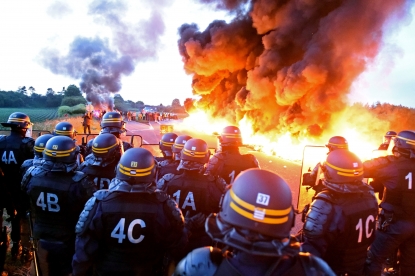 The police set off a water cannon and the protesters dispersed in seconds. Firefighters put out the fires, the protesters returned to their cars. Noone was injured, noone was arrested.

Elsewhere in France, similar protests have degenerated into violence, with injured both among the police and demonstrators. But in Douchy, it ended up being a show of force by both sides. Even if my photos -- thanks to the flames and the nice sunrise light -- could suggest otherwise. 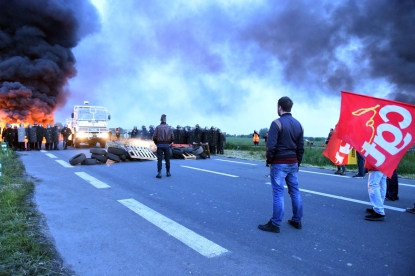 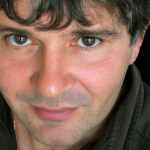 Freelance photographer based in Northern France.
All posts 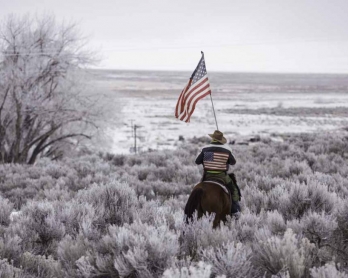