When the big boat comes too late

CATANIA, Italy, April 30, 2015 – Migrant landings in the ports of southern Italy follow a well-worn pattern. Out on the ship’s deck, the men, women and children sit surrounded by rescuers and humanitarian workers in white protective suits, gloves and masks.

The migrants, almost always from sub-Saharan Africa or Syria, are asked to stand, row by row. At the foot of the gangway they are handed a bottle of water and a pair of ‘Crocs’-style rubber shoes, before they are led into a Red Cross tent for a health scan – to detect cases of scabies and head lice and make sure they are treated before they are sent out to shelters in the region.

After that the migrants sit on the quayside, on the ground, until they are taken to a large tent for a night of food and shelter. 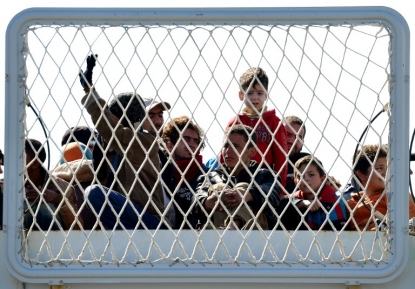 Rescued migrants wait to disembark from the Italian Navy vessel Bettica in the Sicilian harbour of Augusta on April 22, 2015

Despite the sound of the wind and the clank of machinery, what strikes me as we watch one such landing in the Sicilian port of Augusta this month, is the silence. How docile these people’s manner as they follow orders, wordlessly.

We are there to report on what turns out to be one of the deadliest weeks in the years-long migrant crisis facing Italy and its southern European neighbours.

News of hundreds of migrants landing on Italian shores has become the stuff of routine at the AFP bureau in Rome. The average last year was 475 new arrivals each day. But this particular week in mid-April, with the Mediterranean calm for the first time after weeks of choppy weather, begins with an alarming spike in migrant arrivals. 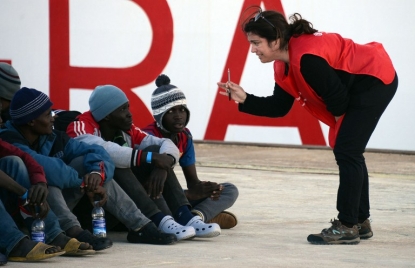 Shipwrecked migrants listen to an Red Cross worker after disembarking from a rescue vessel in the port of Augusta in Sicily on April 16, 2015 (AFP Photo / Giovanni Isolino)

For the single day of Sunday, April 11, Italian coast guards are called out by 22 different vessels, carrying more than 3,000 people in all. Distress calls keep flooding in on the Monday, and one boat capsizes with at least nine people confirmed dead.

On the Tuesday, witness accounts gathered from wreck survivors by the aid group Save the Children suggest that as many as 400 of their fellow passengers may still be missing. That evening I get confirmation from the International Organization for Migration that these are “credible” reports. I file a news alert and head south the following day, travelling with a video reporter colleague.

By the time we reach Reggio Calabria, at the tip of the Italian “boot”, the survivors have left for shelters in the north of the country. So we cross over to Sicily, where there are reports of another shipwreck with some 40 people missing, and where a group of Muslims has just been arrested on suspicion of throwing Christian passengers overboard in a separate, tragic incident. 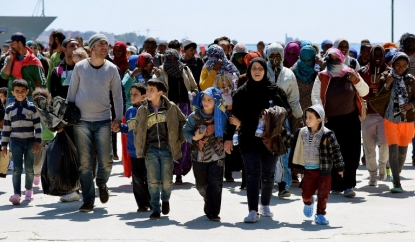 Rescued migrants on the quayside after disembarking from the Italian Navy vessel Bettica in the Sicilian harbour of Augusta on April 22, 2015 (AFP Photo / Alberto Pizzoli)

We reach the port of Augusta at the southern tip of Sicily, on April 16, just in time to watch a group of 600 migrants, rescued from five different boats, disembark from an Italian coast guard ship. The next day we meet up again with a group of them – largely by chance – at a brand new migrant shelter run by a man called Francesco Magnano, otherwise known as “Ciccio”.

Ciccio was sacked from his previous job running a shelter for underage migrants. His offense was to have spoken out against the appalling living conditions in the place, accusing the shelter’s owners of looking to turn a profit at the youths’ expense. 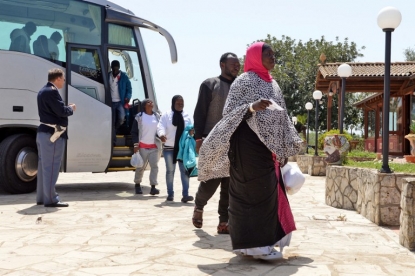 His new shelter, opened in a converted hotel, is financed through a government scheme that pays out around 30 euros per person per day, supposed to cover their food and board, clothing, Italian lessons, legal aid and pocket money.

We meet him as he prepares to welcome his 112 first occupants, all from the group we saw disembark in Augusta. They arrive in silence, clearly extenuated after several days on a rough sea crossing, up to three more on the coast guard ship – and another night under a tent on the dock, all without a chance to wash.

“Buongiorno,” says their host. “My name is Ciccio, and I am here to give you respect, food, shelter, clothes and honour.” 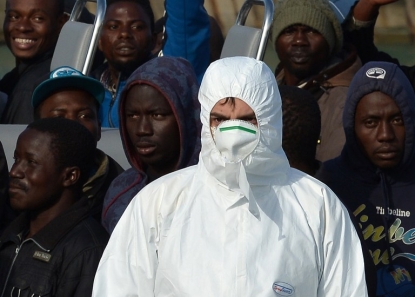 Rescued migrants disembark from the Italian vessel Denaro at the Sicilian harbour of Catania on April 23, 2015

He reads off the roll call, merrily mangling the unfamiliar African names. The mood begins to mellow, and with the interpreter yet to arrive I end up translating for the French-speakers amongst the new arrivals – who proceed to bombard me with questions as soon as Francesco has his back turned: “Where are we? Ah - Sicily? What day is it? Can I buy a phone? What about cigarettes? How long will we be staying here?”

As the chef gets busy with the young migrants’ lunch, and the hotel managers settle them into their rooms, we get chatting.

Their stories are all similar, all harrowing. They tell of a fraught, ruinously expensive journey across Africa, the perilous crossing of the Sahara, their arrival in Libya. They tell of the violence of militias and people-smugglers. They tell of their fear on board the boat, of water seeping in, of the rescuers who barely reached them in time. And finally, of reaching a safe shore. 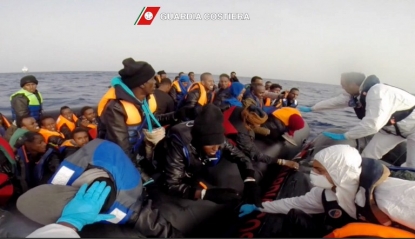 For some, the journey took weeks. For others it was whole years, with stops along the way to earn money to complete their journey. Many see Italy as a stop en route to northern Europe, and worry about being stranded in this picturesque-but-remote part of the world.

I will later visit a much larger migrant centre in the region where dozens of people who have been stuck here, in the middle of nowhere, for months, sometimes even years, as they wait for the Italian authorities to process their cases.

It strikes me as a colossal waste to see these young people, with the strength and courage to undertake such an epic journey, reduced to enforced idleness. And yet, what can Italy really do, with unemployment for people their age above 40 percent? 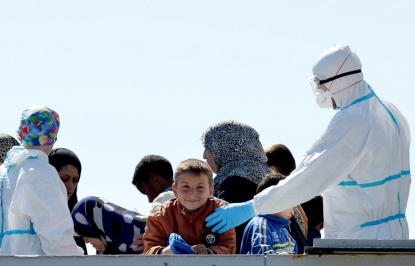 Rescued migrants arrive in the Sicilian harbour of Augusta on board the Italian Navy vessel Bettica on April 22, 2015 (AFP Photo / Alberto Pizzoli)

At Ciccio’s shelter, as the men disappear off for an afternoon nap, the women seem to come alive. Most of their clothes are already washed and strung out to dry. They seem to have shaken off their ordeal already. When time comes for us to fly back to Rome, they send us off with big smiles.

One of them looks right at us, with tired, honest eyes as she wishes us a “safe journey”. Coming from someone in her position, it goes straight to my heart.

Around the same time in Libya, hundreds of people are about to board a fishing trawler, that capsizes in the night of April 19, before the horrified crew of a Portuguese cargo called to its rescue. There are only 28 known survivors. 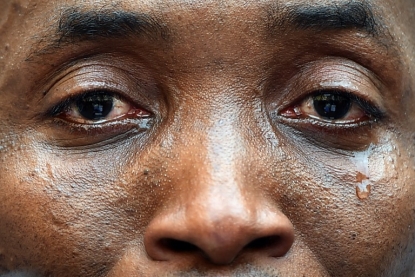 The spokesman for a migrant association cries during a demonstration of asylum seekers before the parliament in Rome, on April 23, 2015 (AFP Photo / Gabriel Bouys)

The news makes me feel sick. I can picture the young men and women I just met, thrashing around desperately in the water.

The next day I am back in Sicily, in the eastern port of Catania where the few survivors are expected to dock. It is close to midnight when the Italian coast guard ship arrives at the dock, where hundreds of journalists from around the world have been waiting.

The coast guard ship is huge, and must seem even more so when seen from a tiny skiff out at sea. Little surprise, then, that the migrants all refer to it as the “big boat”. Some distance away, we watch masked rescue workers and officials busy themselves for close to two hours, before the migrants are led down the gangway and led away to a shelter. 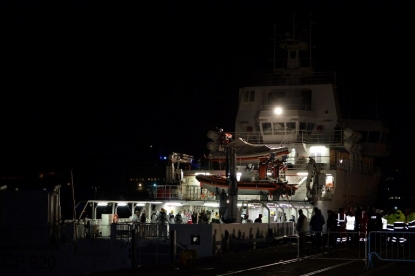 Migrants rescued off the Libyan coast arrive at the harbor in Catania, Italy on April 20, 2015 (AFP Photo / Alberto Pizzoli)

I only really see them through the telelenses of my photographer colleagues, and there is no question of being able to speak to them. Much later, after almost everyone has left the dock, we are granted a briefing by the spokespeople for the IOM and the UN refugee agency. They have spent all day and most of the night out here, but we can read more than just exhaustion on their drawn faces.

After questioning the surviving witnesses, they have pieced together the horrendous picture of what happened on the trawler that night. There were 800 people on board. Men, women and children who vanished without a trace, trapped in the hull, in the Mediterranean’s worst disaster of its kind in decades.

But it does not end there. Tonight, too, other desperate people are out there waiting for help, lost on the black water. And there will be more tomorrow, and the day after that, and all through the summer. And everyone knows that the “big boat” will not always get there in time.

Fanny Carrier is the deputy head of AFP’s Rome bureau 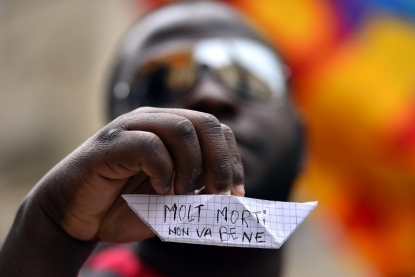 An inscription meaning 'Too many deaths, not good', held up by an asylum seeker at a demonstration before the parliament in Rome, on April 23, 2015 (AFP Photo / Gabriel Bouys) 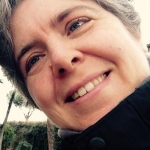 Welcome to the SimCity bureau