The Tunisia uprising's 'man with a cage'

Tunis - On January 14, 2011, Wadii Jelassi heard that a protest was under way in central Tunis.  There were risks in attending mass street protests against the government of Zine El Abidine Ben Ali, who had ruled Tunisia with an iron fist since 1987.

But the young, unemployed Wadii Jelassi and his friends had an axe to grind: the notorious Trabelsi family, Ben Ali's in-laws, were accused of stealing land in the neighbourhood.

Wadii Jelassi is from Ennahli, a forested area on the edge of the Tunisian capital, where wealthy residences have nibbled away at public land despite locals having little access to decent housing.

He was born in an unlicensed building next to the highway which has since grown into a modest two-storey house. To this day, the neighbourhood has no pavements, no sewerage and no official status. Despite their marginalisation during Ben Ali's two-decade rule, the residents carefully avoided involvement in politics, even when mass demonstrations flared in the country's impoverished interior in 2010 after Mohamed Bouazizi, a street vendor, set himself alight on December 17, 2010, weighed down by despair.

Jelassi didn't tell his mother, a cleaner, or his father, a retired driver, when he went to attend protests."They didn't like it," he said. "They were scared for me." After leaving school at the age of 14, Jelassi worked for an aluminium firm but quit as the salary of 180 dinars (100 euros a month at the time) did not allow him to be independent.

He tried a string of casual jobs in restaurants, building and retail before meeting a leftwing lawyer, who brought him into the world of opposition politics. 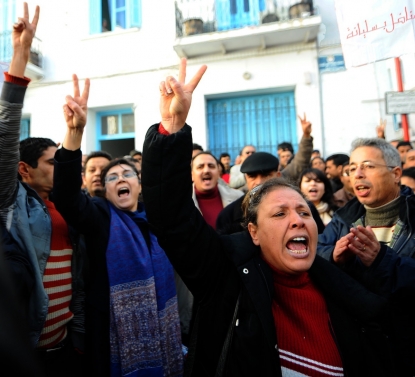 "We coordinated by phone to meet, saying 'let's have a coffee' here or there without mentioning any details," said Jelassi. 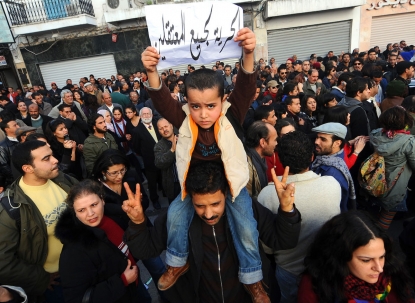 On January 14, he headed on foot to the protest on Bourguiba Avenue in the heart of Tunis, carrying a birdcage. 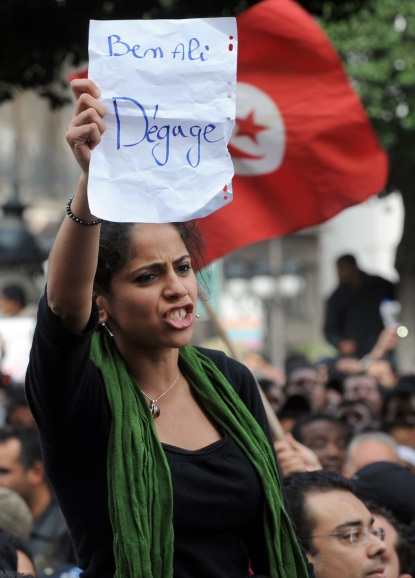 "When people asked me where I was going with my cage, I said I was going to the market," he said. After 23 years under a police state that had clamped down hard on the slightest criticism, fear had given way to outrage.

"We knew that people might die. But my only concern was to say that Tunisia had been a cage for 23 years, and was now claiming its freedom."

On that same morning of January 14, AFP photographer Fethi Belaid had followed the first demonstrators as they hit the streets of Tunis, including lawyer Radhia Nasraoui, who was there to demand freedom for her husband, a leftist politician.

"Around midday I went to the ATCE," the government propaganda and censorship office, said Fethi, a veteran Tunisian photographer.

"Ironically, that was where we went to send our images to inform the world about the demonstrations, because it was the only place with a stable internet connection." 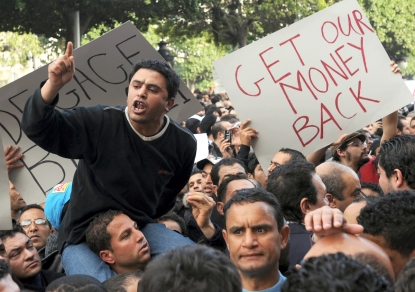 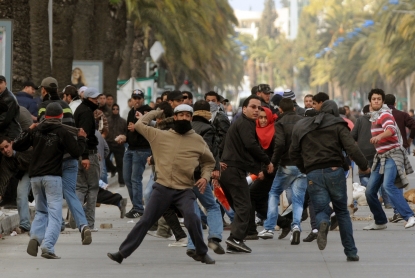 He had hesitated to file portraits of young people with fists in the air, shouting against the regime, for fear of putting them in danger. When he headed back to Bourguiba Avenue at around 2:00 pm, he could not believe his eyes.

"The police cordons protecting the Interior Ministry had been breached, and demonstrators were on the fences," he said.  "There were even photographers climbing on the porch over the door of the ministry to take photos. It was incredible." 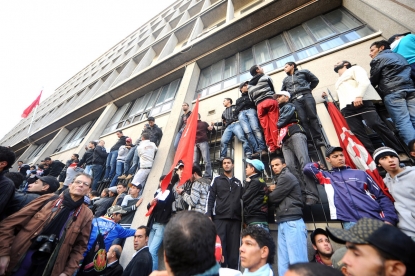 In 20 years as a photographer in Tunisia, for government daily La Presse, then AFP, Belaid had never seen such demonstrations.

For years his bread and butter had been covering the activities of Palestinian leader Yasser Arafat, who was exiled to Tunisia until 1995, along with international summits, visits of foreign leaders, football matches and the hunger strikes of opposition figures.

The son of a soldier, he had studied fine art before becoming a press photographer at the age of 21. By 2010, he was in his 40s and had contacts with everyone from Palestinian negotiators to the presidential palace. When the revolution broke out in December of that year, he was immediately on the front lines. 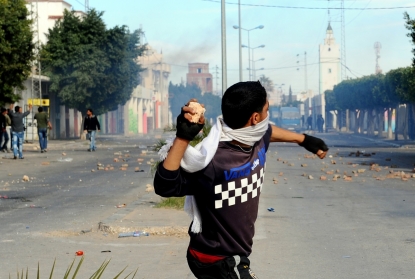 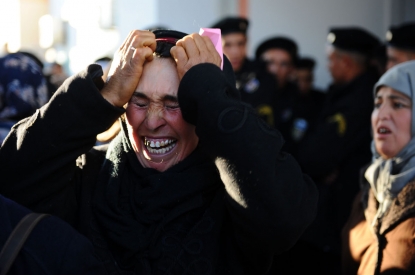 A woman cries in front of the prefecture as she waits with other people to meet the governor on January 10, 2011 in Sidi Bouzid. (AFP / Fethi Belaid)

Belaid's images of anti-regime demonstrations in Tunis that December and riots in the central town of Regueb the following month were among the first pictures by professional journalists of the uprising that would spark the downfall of dictators across the Arab world. 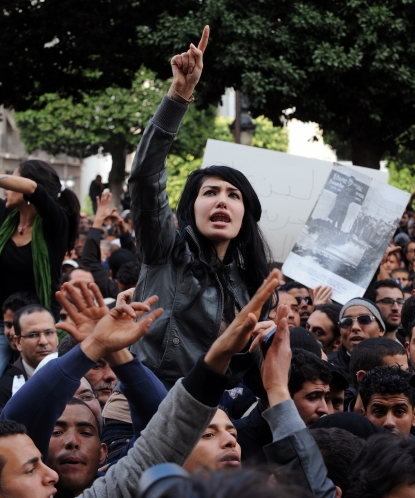 When he arrived in front of the Ministry of the Interior, the Ben Ali regime's nerve centre, Belaid started looking for a place from which to shoot pictures of the unprecedented crowd.

"My colleagues were better placed than me, but I found a spot by climbing on the plant pots," he said.  "At that moment, I saw this kid on his friend's shoulders, holding up a cage. I just had the time to take six shots, then he got down and was lost in the crowd." 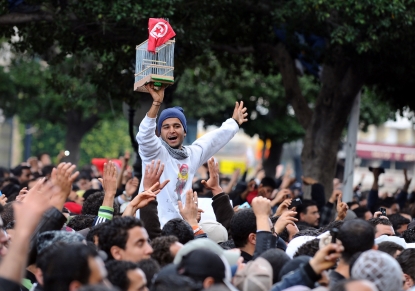 "Taking a press photo is often a matter of chance," he added. Filing the images was just as much of a challenge. With teargas quickly filling the streets, journalists who had holed up in the ATCE to send their photos were sent packing. Police could be seen through the windows, smashing up cars. 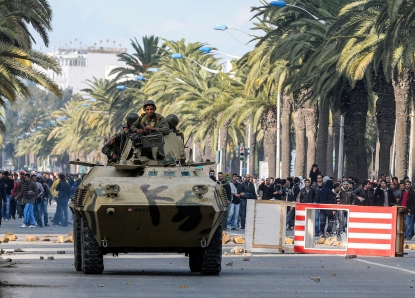 Inside the ATCE, the atmosphere had changed to one of stunned silence.

Belaid showed them a picture of the headquarters of the ruling RCD party. In the bottom corner, smoke from a raging fire -- that of a burning police motorbike -- partially obscured a large portrait of the president. One of Belaid's colleagues told him: "Ben Ali's finished, send the photo."

"If Ben Ali hadn't fallen, that photo could have sent me to prison."
But Belaid still gave a policeman a ride home to avoid being stopped for violating the nighttime curfew.  He headed home. That evening he filed dozens of historic pictures -- a vast crowd of demonstrators, armoured cars in the middle of Tunis, and the headquarters of Ben Ali's RCD party under siege.

Hours later, public television announced that Ben Ali had left the country. TV channels across the world devoted special coverage to the revolution that night, many of them with backdrops of Wadii and his cage. Belaid said he was proud to see his pictures published across the world.

"It was also a relief to be able to publish those photos without much fear. The final weeks before January 14, it became very difficult to work, the head of the police had confronted me, and frankly we were afraid."

The final years of Ben Ali's rule were a tough time for AFP's bureau in Tunis, with repeated summonses and intimidation by the authorities.

Police had broken into the bureau chief's home in 2005 using anesthetic gas. Another newly-arrived head of the office had been expelled from the country in 1995 after a false accusation of sexual assault in a parking lot in Tunis.

In the very final weeks, the threats became more explicit. Every word of every report had to be carefully measured to avoid the bureau being shut down. 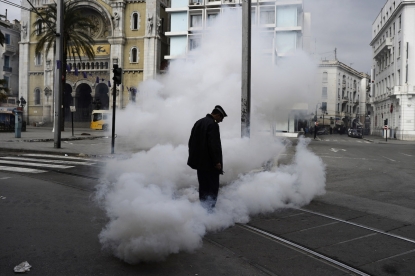 A policeman stands in a cloud of teargas during a demonstration in Tunis on Janaury 18, 2011. (AFP / Fred Dufour) 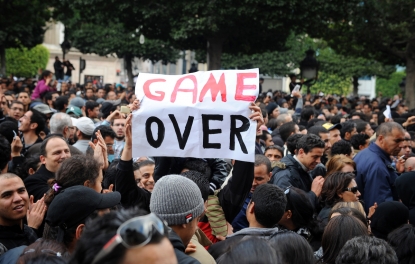 But as the country started on its path to democracy, in political party offices, shops and hotels, Belaid's photo was hung up everywhere.

"When Beji Caid Essebsi became prime minister, his chief aide offered it to guests. Even Carrefour was selling pirate copies," he said. It was not until years after the revolution that Belaid finally met the star of his iconic image.

Belaid had also been aware of Jelassi through his occasional appearances on Tunisian television, but they finally met through mutual friends in the world of politics. The young man with a cage had by then become a symbol of the country's revolution. 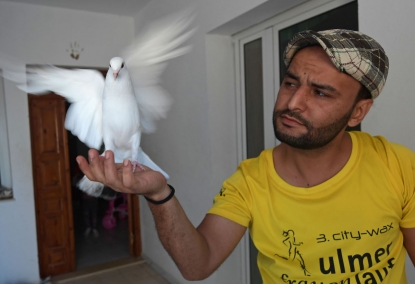 Tunisian Wadii Jelassi, poses at home with a bird on November 22, 2020 in Nahli on the outskirts of Tunis (AFP / Fethi Belaid)

When President Kais Saied was elected in October 2019, he paid homage to Wadii in his acceptance speech. "Neither politicians nor Tunisians should forget the young man who let the bird out of the cage," said the solemn academic, brought to power by young voters who have held tight to the ideals of the revolution.

"The bird will not return there, even if it is sick," he said. "It has entered into history." Wadii Jelassi had goosebumps when he heard those words.  But while Tunisia has been presented as a model of democratisation in the wake of the 2011 Arab revolts, for Jelassi, "the party is over". 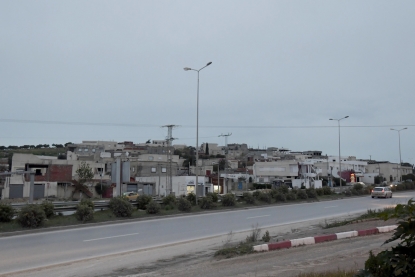 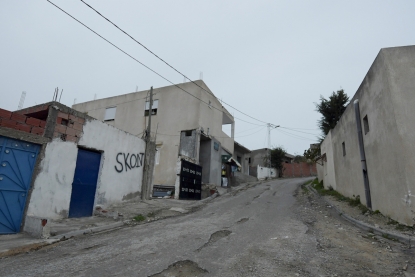 Now in his 30s, he is no longer unemployed, but he still lives with his parents, along with his wife and daughter. Their neighbourhood still suffers regular water shortages -- and floods. Residents recently ran their own fundraising drive to repaint the pedestrian tunnel that leads under the highway and to the nearby school, but when it rains, water rushes down the steep streets, forcing the children to wade barefoot to class.

With his precarious job in a supermarket, Jelassi struggles to make ends meet. He has yet to realise his dream of a career in theatre and film. Last year he produced a play on the revolution, with Belaid's photo in the background.  A Tunisian film also featured the young demonstrator with his cage -- played by another actor. But Jelassi has featured in several local productions and regularly takes to the stage as a clown and magician at events and birthday parties.

Like Tunisia's president, Jelassi clings to hope for a better Tunisia. But he is not convinced it will happen. "We were poor and locked up. Now we're not locked up -- but how can you be truly free when you don't even have a real home?" he said, picking up a dove cooing on the landing and putting it back into its cage. "I'll be free when I can live in a neighbourhood with a proper sewerage system and a stable electricity supply." 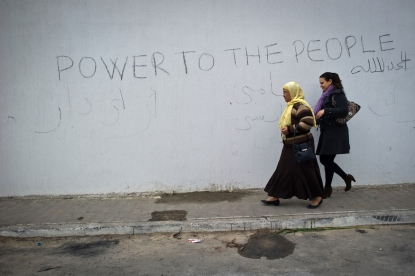 This text was translated by Paul Raymond. 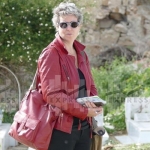