Sesena, Spain -- This fire has been years in the making. It was only logical -- five million tires illegally dumped to form a giant, 15-meter-high mountain in the open air, a stone’s throw from a residential area. Add to that political infighting that has blocked resolving the problem for years, and you understand how tempting it becomes for someone to settle the whole affair by simply lighting a match….

That’s what apparently happened in Sesena, a town some 40 kilometers south of Madrid. The tire dump here began growing in the 1990s and hasn’t stopped since, despite being declared illegal by the government in 2003. A few months ago, the authorities decided to call for bids to get rid of the rubber mountain, but the process hadn’t been put in motion yet. And so, in the night between May 12 and 13, the inevitable happened -- the thousands of tons of tires begin to burn. When I woke up on May 13, the thick column of black smoke rising to the sky was visible from the capital. 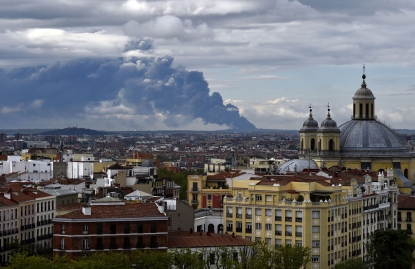 Fire is my thing. For 14 years now, from April to October I have covered forest fires across Spain. I have passed both theoretical and practical training to accompany firefighters into the heart of the infernos, where no other journalist can go. But this fire was different.

I also happen to be a specialist in environmental issues, so I know the Sesena tire dump quite well. Even before the fire, it was an ecological disaster that environmental activists have denounced for years. 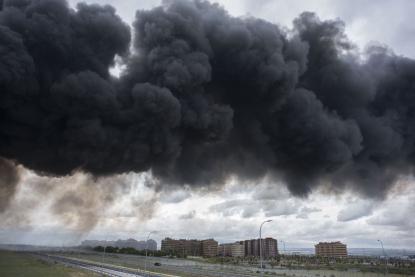 It was also a great place for photographers looking for surreal images, so I’ve shot there often. A few years ago, while I was shooting the dump from the outside, the owner at the time let loose two guard dogs on me. Luckily I have a friend who works in the security business and who had told me what to do in just such a situation -- stand still and don’t move a millimeter. Since the dogs are trained to run after people and immobilize them, they won’t bite if you manage to overcome your terror and remain as still as a statue.  So while the dogs were barking at me, I managed to call the police and they came and got me and that was that.

On the morning of the fire, a colleague and I entered the dump through the front entrance. By chance, the firefighters happened to be taking a break when we arrived, so nobody tried to stop us. I stayed for quite some time, shooting the mountains of tires and the column of black smoke in apocalypse-type lighting. 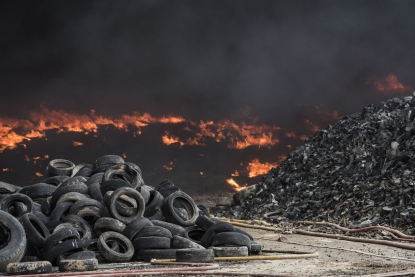 I always say that a forest fire is like a wild animal -- it runs in one direction, then suddenly turns and heads right toward you. You always have to be on your guard, anticipate the direction the flames might take in order not to be trapped in a deadly situation.  At Sesena, it was a bit more simple -- the dump is in the middle of fields that are green this time of year and will not burn. There was also an alley in the middle of the dump, which limited the fire’s perimeter. So in a way, it was less dangerous.

The main problem at Sesena was the smoke. In any fire, it’s never the flames that are the most dangerous, but the smoke -- the hot air that burns the lungs and can very quickly kill you. Smoke from a forest fire is toxic enough, but smoke from a tire fire is much worse. It’s full of toxic particles that spread through the air and is really, really bad. If a gust of wind comes along and blows the smoke all around you, you’re a goner. So we didn’t stay inside the dump for too long. 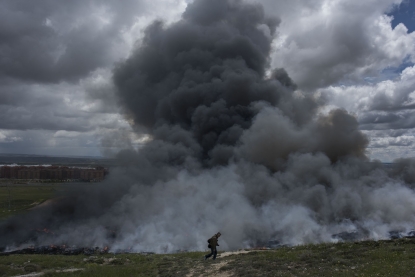 At a certain moment, I notice an airplane circling above us on what appeared to be a reconnaissance flight. Thanks to my forest fire fighting experience, I could guess where it would aim, so I had just enough time to run to the top of a nearby hill and to shoot the plane on its second flyover, just as it dumped thousands of liters of water on the burning tires, right before my lens. 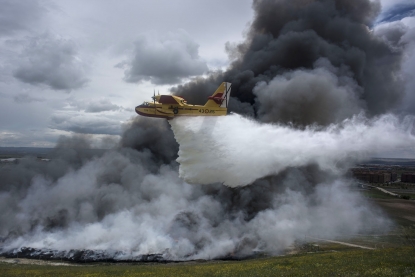 On that day, the sun was shining brightly, so it illuminated the firefighting helicopters hovering in the sky, in front of the thick black curtain of smoke, so the photos had lots of contrast and ended up being spectacular. 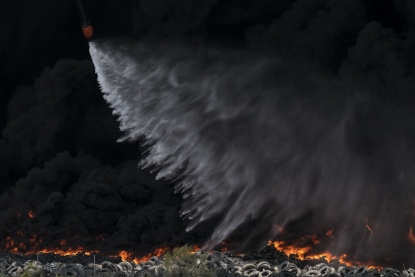 As I said, the dump lay only a few hundred meters from a residential neighborhood. It’s a new area, like the countless others that were built all over Spain during the real estate boom that preceded the financial crisis. So many of the houses were empty. But still, there were some 10,000 people living there. In the late afternoon, the authorities decided to evacuate them just in case. Their homes weren’t threatened by the blaze, but the smoke was potentially dangerous and the smell was just horrible. The residents were told they could return the next day. 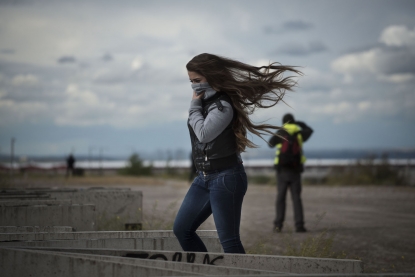 The fire was still burning days later. Tire fires are among the longest to put out. It can take weeks to put one out, little by little, with water and sand. At the time of this writing, the fire has destroyed a bit more than two thirds of the dump.

Although we still don’t know for sure the cause, for many there is little doubt as to how the blaze started. The Sesena dump has been at the heart of an interminable political debate and had been denounced by both local residents and the European Commission. Sooner or later, these millions of tires would have had to be removed, which would have cost quite a bit of money. This fire may be an ecological disaster, but it certainly saved a lot of people a lot of money… 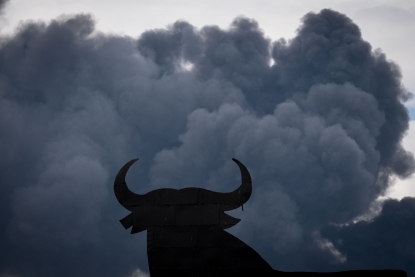 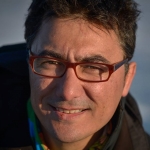 Freelance photographer based in Madrid.
All posts