Athens -- I first met Moufid in the summer, when I wrote about the unusual case of this Syrian refugee.

Moufid is not what you would call a stereotypical refugee. Despite the enormous obstacles in his way, the dapper gentleman who used to run several restaurants in Aleppo managed to get asylum in Greece in just three months. This opened the way for him to travel where he had wanted to go all along -- Germany, where he lived as a young man and where two of his brothers and one daughter live today. Though once he got there, he was no longer sure he would stick with that plan. He may now opt for Plan B. But more on that later. 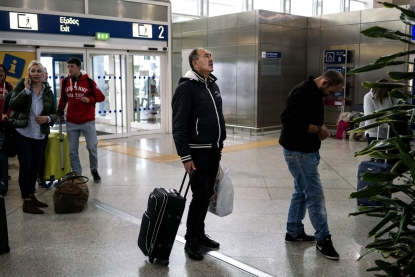 Moufid at the Athens airport before leaving for Germany, October 28, 2016. (AFP/ Angelos Tzortzinis)

Meeting and getting to know the 61-year-old gave me a chance to have a glimpse of another side of the refugee story, the underbelly where travel documents are bought and sold, and where some manage to maneuver through the impressive physical and logistical barriers in their way.

When I tell friends and colleagues of Moufid, I often get an incredulous reaction. It’s understandable -- he seems to have effortlessly glided through all the obstacles in his way. And I must admit I had plenty of my own doubts. But after months of talking to him several times a week over a cup of coffee or a glass of wine, my hesitations gradually disappeared. The things that he told me always matched up and his self-reflections were always very straightforward, if not always complementary.

Since we first met over a cup of coffee in sunny Athens in the summer, he has continued to confide in me. (“I’m 61 years old, I’ve been around, I know whom I can trust.”) Like telling me how he managed to get to Athens after landing on the island of Chios after obtaining stolen papers. A move that helped him avoid the fate of some 16,000 people who have been stuck on the island after an accord between Turkey and the EU came into effect in March.

Or that he never dared to try and use the Spanish identity card that he bought for 350 euros to try to fly out of the airport in Athens. After weeks of reflection, he decided to take the legal route and ask for asylum in Greece, an option chosen by frew refugees, most of whom prefer to travel on to northern Europe, especially Germany. He ended up getting asylum on the day of his interview, an anomaly that neither he, nor any of the asylum specialists that I have interviewed have been able to explain. 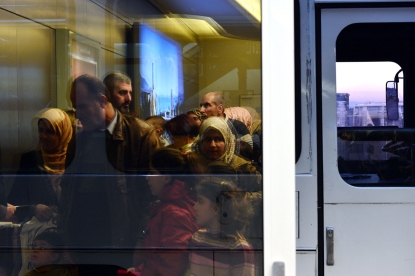 Refugees wait at the Athens airport to board a charter flight for France as part of an EU relocation program. November, 2016. (AFP / Louisa Gouliamaki)

Personally I think that several things have played in his favor. For one, he was one of the very few Syrians to have applied for asylum in Greece at the time. His advanced age also probably helped. He was able to produce his Syrian passport and the officer interviewing him did not seem to question him on how he got to the country.

I have followed his story closely over the past several months. In early September, he got his three-year residency card. Four weeks after that, I accompanied him to the police station where he got his five-year refugee passport, which allows him to travel anywhere he wants (except Syria) for up to three months.

Being a refugee requires an ability to keep calm in exasperating situations. Like at 9:40 am when, after two and a half hours of waiting in the rain, a Greek policeman appears to say “No more residency permits and passports today!” The next day, Moufid came even earlier and got his. With his travel documents in hand, he did what he always meant to do -- he flew to Berlin where he aimed to ask for asylum, his Plan A.

When he first got to Athens, he lived in a small hotel. At the end of August, he moved to a small apartment that that he shares with others. He has a clean and sunny room , which he rents from a Polish woman who rents about a dozen such rooms in the neighborhood, frequented by refugees. 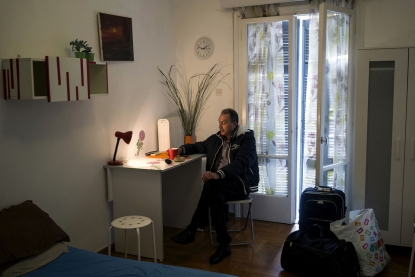 Moufid in his room in Athens, October, 2016. (AFP/ Angelos Tzortzinis)

Out of some 48,000 refugees who have been stuck in mainland Greece since its northern borders were closed to them at the end of February, the majority live in camps. In the capital, most are in the midst of being “relocated” to another EU country and are housed either by the government or non-governmental organizations. Then there are those who can afford to rent their lodgings like Moufid, or those who live in squats run by Greek leftists.

Moufid’s roommate was Eva, a retired Polish woman who did not want him to smoke in the apartment, but whom he eventually won over by cooking her delicious dishes.

He spent most of his days drinking espressos at a cafe that he nicknamed “my office.” His respectable air, his humor and his natural authority have made him a man of the neighborhood, with whom people come to speak and pass the time.

From this vantage point, he offered great insights into the world of refugees around him. 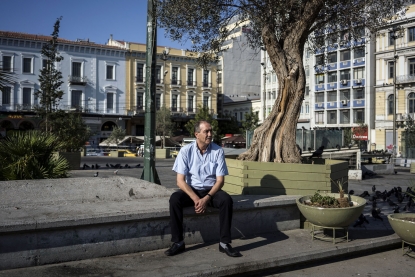 Like a young pretty Syrian mother who wore a veil and wasn’t so sure if she wanted to go to Germany to join her husband whom she hadn’t seen in two years. Or a couple where the wife had fallen in love with another refugee (“that moron, she flirts in front of him all the time and he doesn’t notice anything”). Or a 23-year-old pregnant Iraqi woman who was looking for both a new smuggler to help her on her way and a place where she could get her lower lip pierced.

Moufid saw a lot of smugglers from his cafe “office.” “Look, they’re out in plain sight,” he would say, pointing to a pair sitting at a table, uptight, not speaking much.

The closing of the borders did not seem to be a problem for those who could afford to pay 5,000 euros per person for a one-way trip to northern Europe. And paradoxically for this type of business, Moufid told me that from what he heard, the smugglers appeared to be honorable -- they guarantee passage, however many tries it takes, and don’t cash in their payments until the “client” arrives at his destination.

Since Moufid made friends easily, he quickly got on good terms with the smugglers and often put potential clients in touch with them. He assured me that he hadn’t received a euro for his efforts. 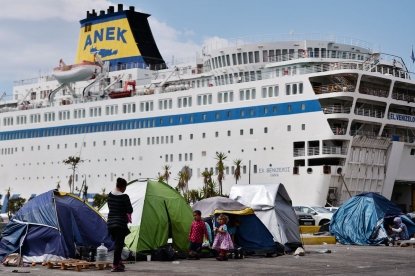 A makeshift refugee camp at the Piraeus port, May, 2016. (AFP / Louisa Gouliamaki)

In a Greece that is in theory closed to refugees both coming and going, he would often say things like: “I have friends from Aleppo who are coming next week, they’re asking me to help them find their bearings before they...” he would make a gesture of flying away. Another time, he waited for an acquaintance who was due to be brought to Athens from Turkey aboard a yacht of a Greek gentleman who did such things at the end of the month.

Always clean and sharply dressed, Moufid didn’t resemble the stereotypical beleaguered refugee. But he got indignant at the thought of someone doubting his condition. “I am a refugee! I lost everything at home. I need peace, like all Syrians. But I am not,” he would always add proudly, “I am not here to ask for help or money.” He added that he doesn’t even know where Praxis, one of the main refugee-helping NGOs in Athens, was even located.

He conceded that he was incredibly lucky with his asylum bid. “But luck is not all,” he told me. “You see, I’ve never played the lottery in my life, but I wasn’t too bad at poker. Because in poker, when you don’t have luck there is still psychology and calculations.” 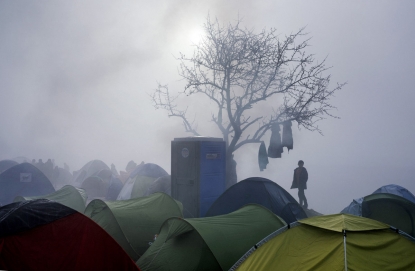 Before he left for Germany, he said he was confident that he could, with the help of a good lawyer, get asylum there. “I lived there for 10 years, I speak German, I ran a restaurant, two of my kids were born in the country and my youngest daughter, who is currently 16, is currently listed as a refugee there.” The teenager arrived in the country with her mother, who is separated from Moufid, at the end of 2015.

But on the day that he left for Germany, his face was not as happy as I expected it to be after finally getting to the day that he had been dreaming about for months. “I am starting from zero. I will have to re-energize. The wait in Greece is over, but the wait in Germany is just about to begin.”

I spoke to him by phone two weeks after he left. “Everything has changed in Berlin,” he told me. “I don’t recognize anything and turns out that I have forgotten a good chunk of German. I feel a stranger here, I am going to need some time to adjust. And there are so many refugees here, so many.”

We spoke again a few weeks later. “Yesterday I saw a lawyer, he told me that my only chance to stay in Germany is to apply under family reunification, to join my daughter. She is at refugee center in Magdebourg (150 kilometers west of Berlin). I haven’t seen her yet.” 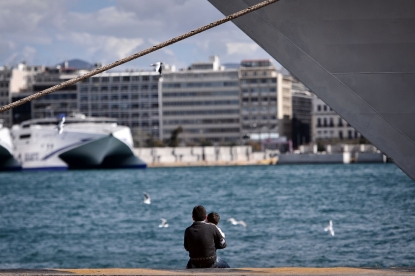 As he waits for his asylum case to proceed in Germany, Moufid plans to return to Athens, in order not to lose his asylum there. He wants to open a restaurant again and figures that in Berlin this will cost him 100,000 euros, but in Athens he could do it for as low as 30,000. Settling down in Greece, with the ability to go to Germany whenever he wants now seems like a perfectly acceptable Plan B for him.

As we talk, he asks me if I remember the young pregnant Iraqi woman that I met.

Before leaving Athens, Moufid asked a smuggler to help the young woman. The smuggler ended up giving her Bulgarian documents, for free. In exchange, Moufid met some people whom the smuggler had sent to Berlin, to drive them directly to the center for asylum seekers. Without her headscarf, wearing a cross around her neck and with her lip freshly pierced, the young woman ended up flying to Rome with no problems, from where she took trains to Berlin, where she is due to give birth to a baby boy in the beginning of 2017... 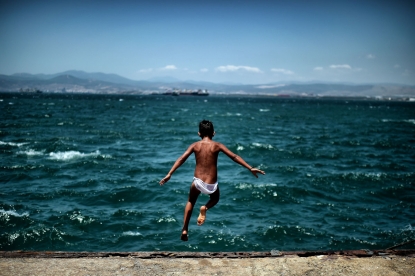 A young refugee child jumps into the sea at a refugee camp in Skaramangas, June, 2016. (AFP / Aris Messinis) 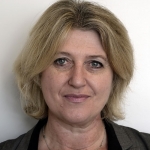 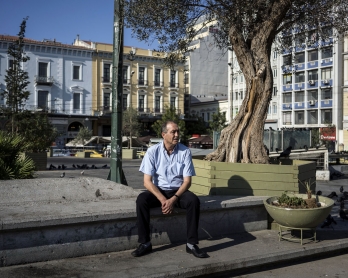 'I've always hated waiting and now that's all I do'