Youngstown, Ohio, US, March 22, 2016 -- Just seconds after bounding onstage at his rally in Cleveland, Donald Trump had his crowd booing and howling in unison -- not at likely Democratic nominee Hillary Clinton, and not at his Republican presidential rivals either.

They were booing the US media.

"Very dishonest people, I have to tell you that," Trump told supporters.

Three days later in Miami, he railed against the "disgusting reporters" covering his campaign.

Covering Trump is without doubt the most colorful political reporting assignment to be had today in the United States, which is currently picking which Democrat and Republican will go head to head in November's presidential election.

As followers of breaking news, the media must keep its collective eye on Trump, whose unfiltered bluster and volatile campaign stops -- punctuated by occasional violent clashes between his supporters and protesters -- often dominate headlines.

But it is an assignment bristling with uncertainties, as Trump trash-talks reporters to their faces and gets his staff and the masses to follow suit. 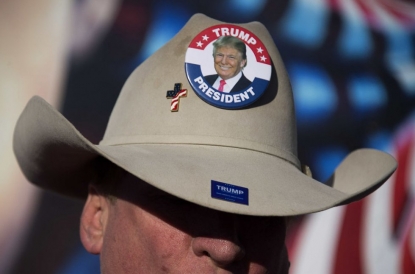 Anger has reached alarming levels at some Trump events. Last Saturday near Dayton, a protester jumped a barrier and rushed the stage as Trump was speaking. The man was tackled by Secret Service agents and taken away.

At a rally in an airport hangar near Youngstown, Ohio, Trump disparaged the reporters who cover the celebrity billionaire -- and who have blessed him with wall-to-wall coverage for months -- as "the most dishonest people on Earth."

He pointed to the television cameras packed on the press riser. "The worst. True. True. So true," he said.

The crowd, mostly white males, turned en masse to the press pen and jeered. Some raised their fists, while others waved vulgar anti-Hillary Clinton signs in front of the cameras.

I looked around at my media colleagues. A few shook their heads and others muttered under their breath, but most carried on with their work, outwardly unperturbed by the metaphorical pitchforks raised at them. 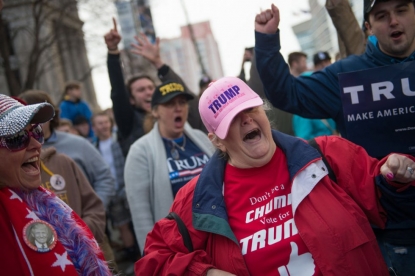 It highlights one of the contradictions of reporting the Donald Trump experience: covering perhaps the singular master media manipulator of the 21st century, who rips reporters one day but calls into morning talk shows the next, while enduring scathing verbal takedowns from the very celebrity billionaire at the center of the story.

The press -- a mini army of broadcast networks, cable news channels, the wires, national daily newspapers and online media outlets -- have followed his every move and word since he announced his insurgent campaign last June.

Yet their jobs on the Trump trail have become increasingly precarious, particularly in recent weeks, corresponding to heightened tensions at the rallies including in Chicago, where violent clashes between supporters and protesters forced Trump to cancel an event. 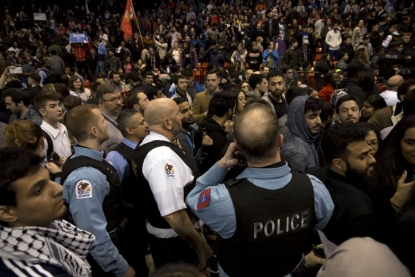 Trump supporters and protesters confront each other in Chicago. (AFP / Tasos Katopodis)

I have not been the direct target of anti-media invective, although several people at Trump campaign stops have hurled unprompted vitriol at news reporters doing their jobs.

"You're a bitch!" a man yelled to journalists in the press pen at a February rally, NBC reporter Katy Tur described in a tweet.

I witnessed plenty of hostility at Trump's Ohio rallies this past week, including from Trump supporters who accused the press of undercutting his message or glomming on to the prospect of the Republican establishment plotting to derail the 69-year-old real estate mogul's march to the nomination.

But for the most part, despite their beef with "mainstream media," most Trump supporters appeared more than happy to speak to a reporter when I approached them in the rallies.

"Yeah, he aggravates them a little bit," 70-year-old Royce Audia told me, referring to how Trump tends to stir up his supporters who vent frustration at protesters and the press, as she awaited the candidate in Youngstown.

Many in the crowd were eager to display their shirts with off-color slogans, one of which had an image of President Barack Obama above the words "100 percent douchebag." 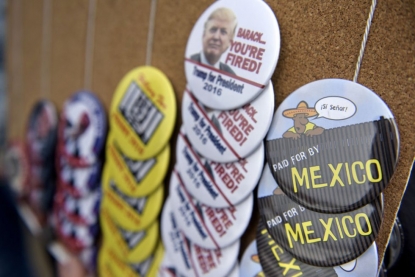 At the rally in Cleveland, a handful of Trump fans castigated reporters as they filmed protesters who peacefully held up anti-Trump signs, under the watchful eye of horse-mounted police.

But the anger was aimed mostly at the protesters, many of them African-Americans.

"You want free health care? Join the military!" I watched one man snipe repeatedly at protesters.

"Get the hell out!" yelled a man in a black sport jacket with a shirt underneath that depicted Clinton as a garish Joker, Batman's villainous foe. 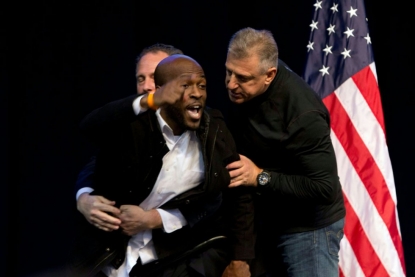 An anti-Trump protester is removed by security in Chicago. (AFP / Tasos Katopodis)

Earlier inside the rally, some attendees got into shoving matches with protesters near the press pen. Photographers leaned over the railing to capture the disturbance, drawing cat calls from attendees.

The press has felt the physical wrath of Team Trump as well.

Late last month at a rally in Virginia, an award-winning photographer for Time was slammed onto a table and then the ground by a Secret Service agent as he sought to take photographs of protesters being removed from the event. 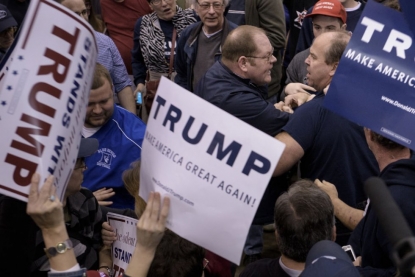 A clash at a Trump rally in Ohio. (AFP / Brendan Smialowski)

Last week as Trump fielded questions while leaving a Florida news conference, his campaign manager Corey Lewandowski allegedly grabbed a female reporter, Michelle Fields of the conservative site Breitbart News, so hard that it left bruises on her arm.

The incident, one of the more chilling examples of manhandling of the media as they seek to cover the Republican frontrunner, has been vehemently denied by Lewandowski and Trump.

"@MichelleFields you are totally delusional. I never touched you," Lewandowski posted on Twitter. "As a matter of fact, I have never even met you."

I guess these just magically appeared on me @CLewandowski_ @realDonaldTrump. So weird. pic.twitter.com/oD8c4D7tw3

Despite the clashes, threats and the ominous turn at recent Trump events, just as many journalists -- if not more -- are likely to attend Trump's next rally as he upends US politics and races toward the Republican nomination.

Michael Mathes is an AFP reporter based in Washington DC. Follow him on Twitter. Read his previous blog on the 2016 US election campaign trail here. 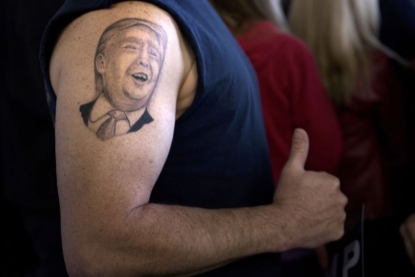 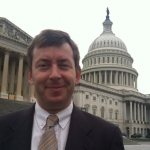 Haunted by his eyes