As his five-year assignment in Iraq was coming to an end, AFP's Baghdad bureau chief Prashant Rao was getting ready to spend his final weeks saying farewell to friends he'd made along the way, and places he'd grown to love.Instead, he finds himself covering a jihadist assault that has caught the world by surprise and once again changed everything in this war-torn nation.

BAGHDAD, June 20, 2014 - In a way, I feel almost like a sportswriter. Having covered Iraq for more than five years, I was wrapping up my story -- mentally, emotionally, socially -- in this amazing, addictive, fascinating country. I was due to leave for good in a matter of weeks, and so my match was in its metaphorical 85th minute, my story nearly written.

When I got here for the first time back in 2009, the Iraq I had read about in books and on the news was there, plain to see -- violent, militarised, terrifying. But another Iraq slowly became evident to me, one with an increasingly vibrant restaurant scene, as well as movie theatres, art galleries and of course markets. As time went on, I felt like I was gaining a fuller understanding of a city that I fell for, almost inadvertently. 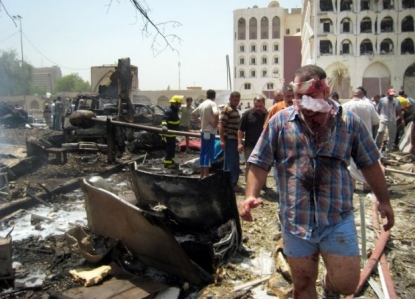 A wounded man leaves the scene of a massive explosion outside the foreign ministry in a residential area close to the Green Zone in central Baghdad on August 19, 2009. (AFP Photo: Khalil Al-Murshidi)

Now? It feels like the losing side has suddenly scored three goals and I have no idea what just happened.

Instead of flitting around Iraq to report on a string of stories I have wanted to write for years, I am instead flitting around the bureau, trying to understand what is happening in a country that may well be falling apart, and compress all of that into 800 cogent words. 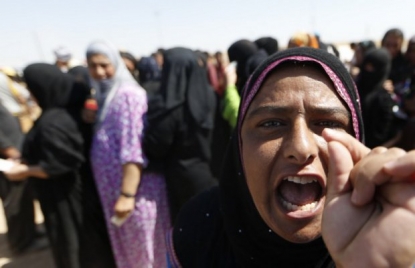 A displaced Iraqi woman shouts as she waits to register at a temporary camp set up to shelter people fleeing violence in northern Iraq on June 17, 2014 in Aski kalak, 40 kms west of the Kurdish autonomous region's capital Arbil.

Iraq is so marvellously complex, with its shifting loyalties and dynamics, that I have often thought that foreign correspondents here -- myself more than any other -- routinely fall short of adequately explaining this country. All these years on, I may have learned some things about Iraq's culture, its history, its politics. But even for a reporter who has spent years in the country, desperately trying to learn more to predict what may happen next, it has been a struggle.

Instead of meeting old friends made over the years in Baghdad to reflect on their country and how it has changed, I am only able to snatch quick telephone conversations, brief Facebook chats, or the odd email. 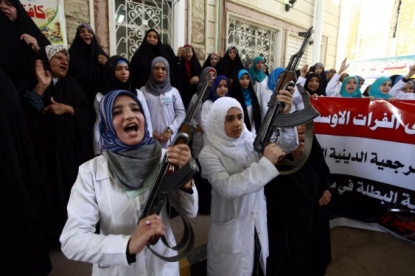 Iraqi Shiite women hold their weapons as they gather in Najaf to show their willingness to join Iraqi security forces in the fight against jihadist militants. (AFP Photo / Haidar Hamdani)

Where normally I would have wanted to delve deeper into their lives, and try to appreciate what it means to live in Baghdad, I am only able to speak briefly with those who have real issues, like the friend who, years after submitting an application for refugee status in the United States, found out in the middle of a militant onslaught on his country that he had been rejected.

Instead of sitting back with my colleagues -- people I admire more than they will ever know for their courage, their patriotism, their curiosity and their empathy -- I am in blazing rows with them over news coverage in heated moments as we cover a sudden conflict.

They and I know we mean nothing by the raised voices, but was this how I wanted to spend my last few weeks with my friends? 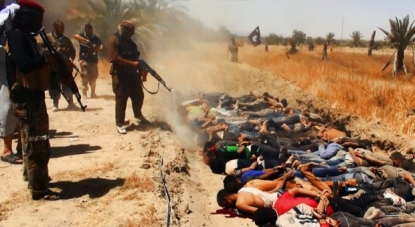 An image uploaded on June 14, 2014 on the jihadist website Welayat Salahuddin allegedly shows militants of the Islamic State of Iraq and the Levant (ISIL) executing dozens of captured Iraqi security force members.

Smarter people than me will debate what the underlying causes for this militant offensive were; whether anyone could have forecast the onslaught's speed and ferocity; when, if ever, insurgents will be repelled; and how this is all resolved.

Me? I am in my own personal 90th minute, shell-shocked, frantically trying to figure out how this ends.

What to do with horrific images from Iraq