A picture obtained on June 2, 2020, from the Facebook page of Nabil Hasan al-Quaety, a Yemeni journalist, shows him smiling in a picture, posted on his account on May 17, in southern Yemen. - The 34-year-old videographer and photographer, who contributed to AFP and other major news organisations in the region, was gunned down in his car by unknown assailants shortly after leaving his home in the Yemeni city. (Photo by Nabil HASAN / FACEBOOK / AFP) (AFP / Nabil Hasan)

On the morning of Tuesday, June 2, Nabil al-Quaety, a journalist in the Yemeni southern city of Aden, left his three children and his pregnant wife at their house and got into his car parked outside. That's where the gunmen got him -- they shot him dead and fled.

Below Mohamed Hasni, an AFP journalist based in the Dubai bureau who recruited Nabil to contribute to the agency five years ago, pays homage to his colleague. 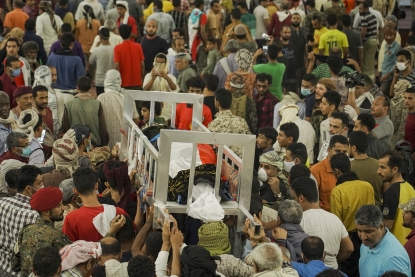 Mourners carry away the body of Yemeni journalist and AFP contributor Nabil Hasan al-Quaety, draped in the former flag of South Yemen, after praying during his funeral, June 4, 2020. (AFP)

Dubai -- At 34, Nabil was far too young to die, but he couldn't escape his attackers who gunned him down in cold blood in front of his home in Aden, a town he loved.

He was a decent, straightforward man from Yemen’s storied southern city, but now he’s gone forever.

The town itself is living testament to the complexity of Yemen’s war which has raged for more than five years with no end in sight.

Aden itself is facing a “conflict within a conflict” after Southern Transitional Council (STC) separatists declared autonomous rule on April 26, torpedoing a power-sharing deal with the government in exile.

The move weakened the coalition fighting Huthi rebels who control the country’s north and its capital Sanaa.

My path first crossed with Nabil’s one day in March 2015 in a small hotel in Aden’s Khor Maksar district.

Curiously, the owner had built a large defensive wall against the sea instead of leaving the property open to the waves of the Gulf of Aden.

Nabil had come to sell footage shot on small amateur camcorders to Arab TV stations and other crews covering the Huthis’s unstoppable southward march after they conquered Sanaa.

Shortly after arriving in the town, I had set to work with instructions to seek out opportunities for multimedia coverage.

Broadcasters on the ground had deployed entire crews, with some having evacuated their entire Sanaa operations in the face of the Huthi campaign, and tended to look down on “little” Nabil’s somewhat quirky filming style.

The hotel had an electric atmosphere and was in a near constant state of chaos. 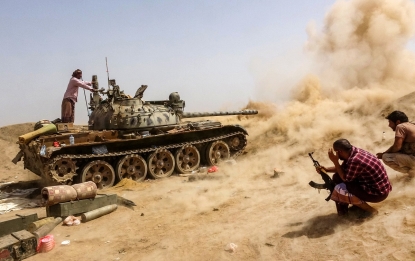 A tank belonging to forces loyal to Yemen's Southern Transitional Council (STC) separatists fires while on the frontline of clashes with pro-government forces for control of Zinjibar, the capital of the southern Abyan province, May 15, 2020. (AFP / Nabil Hasan)

Special correspondents used its garden as a backdrop for live two-ways while an army of Yemeni “analysts” were on hand to elucidate on the news of the day for $100 a go.

Long working hours spent in hastily erected tents in the garden were passed with widespread use of qat, a mildly narcotic plant, the chewing of which is a Yemeni national pastime.

Qat consumption helped soothe the atmosphere and brought relative calm to the assembled journalists who nevertheless continued to juggle their mobile phones.

Nabil always sat among them but was not a great fan of qat, unlike his contemporaries who would spend a relative fortune on the leaves.

It was during a casual conversation that I suggested Nabil should work with us to help with our multimedia coverage, and he accepted. 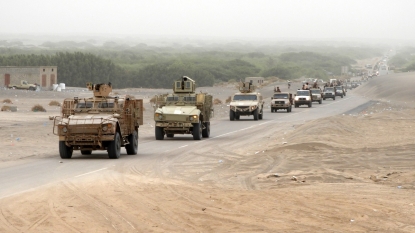 We quickly got to work exploring possible angles in Aden, a former British trading post positioned on the coast, in sharp contrast to its austere inland counterpart Sanaa, the charms of which are hidden by a volcanic mountain range.

As the daily news of the conflict was being handled by the Dubai office, we were able to set off and explore Aden which Nabil knew like the back of his hand.

Patience and perseverance proved essential to our first collaboration, a report on Aden’s bizarrely named “Hurricane” cinema, which was the last movie theatre still working in the town which had once managed to support several of them.

Our patience was handsomely rewarded and the images were breathtaking.

The roofless room with a row of chairs still drew a loyal clientele, a phalanx of elderly cinema-goers who said they came every day at sunset to watch the same Bollywood classic.

A joint feature on the dwindling Christian minority followed, chronicling churches abandoned or transformed into offices, and a convent that had been repurposed as a retirement home.

Then a profile of a young film-maker who managed to shoot and produce a movie with whatever materials were on hand.

Between a video novice like me, and an apprentice like him, confusion, trial and error were the order of the day.

But we pulled it off, often pretty well! The simple reason was that Nabil was an enthusiastic, determined worker, armed with a bright smile and a big heart.

Although at the start he was a little unfocused, over time he learnt to be more disciplined. Journalists covering a complex conflict face inherent risks even if they adhere to safety guidelines, but Nabil showed great bravery and as his career grew he was hailed for his astonishing work on the front lines.

In five years of working with AFP, he became indispensable to our visual coverage of south Yemen.

Danger was never far. Nabil narrowly escaped death at the beginning of 2019 during an attack on a military parade he was covering at a base in southern Yemen. His images of that strike were seen around the world.

Nabil was also an activist, something he had in common with many other citizen journalists operating in war zones. It’s hard, if not impossible, to remain on the sidelines when the very existence of your country, parents, friends and children are at stake.

In Nabil’s case his sympathies lay with the STC. But crucially, this never influenced his journalistic output which always faithfully reflected the reality on the ground.

Under the guidance of the Dubai bureau, he notably produced a professional and impartial TV interview of STC chief Aidarous al-Zoubeidi, Aden’s current strongman. 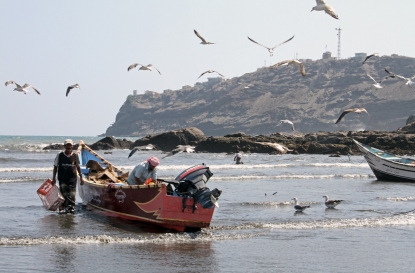 Yemeni fishermen moor their boat in Aden after fishing off the coast of Yemen's southern port city on November 14, 2016. (AFP / Saleh Al-obeidi)

Nabil refused to leave Aden or to even move to a different part of town despite threats to his security, abiding proof of his commitment to his community.

As I say goodbye to you, Nabil, I have to thank you. Thank you for letting me join you as you took your first steps with AFP.

And rest in peace, alongside too many other journalists killed in Yemen for seeking to report the names and faces of those living at the heart of what the UN calls the world’s worst humanitarian crisis.

Among these media foot-soldiers is Abdallah al-Qadry, who occasionally worked with AFP, and who was killed in an April 2018 bombing in central Yemen as he undertook an assignment for a TV broadcaster.

Others are still alive, languishing in prison, including four on death row in Sanaa who were sentenced to capital punishment on April 11 for “treason”. 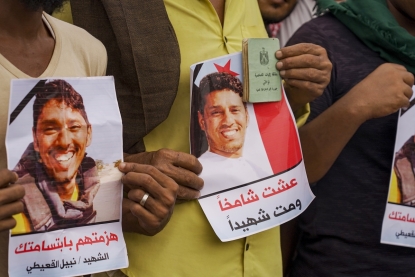 A mourner stands with an old identification document issued by the former People's Democratic Republic of Yemen (South Yemen) while holding with others posters showing the face of Yemeni journalist and AFP contributor Nabil Hasan al-Quaety at his funeral, June 4, 2020. (AFP / -) 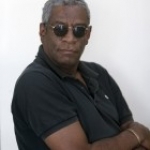