FRUTILLAR, Chile, April 25, 2015 - I had never managed to capture a force of nature as stunning as a volcanic eruption. Chile has some 90 active volcanoes that roar to life from time to time with the kind of raw natural power that every photographer dreams of catching. But the country is extremely long and narrow, and domestic flights are usually cancelled whenever volcanic activity picks up. That means getting to an eruption usually takes hours of driving. And when you get there, the volcano will most likely have calmed down.

That had already happened to me when the Chaiten volcano erupted in 2010, while I was in Peru covering an international summit, and again when Cordon Caulle erupted the next year, when I was in Peru again for a presidential election. Then, last March, I arrived too late for the twin eruptions of Villarrica, some 700 kilometers (450 miles) south of Santiago, where I’m based. I only managed to photograph a few ashes, to my great frustration. 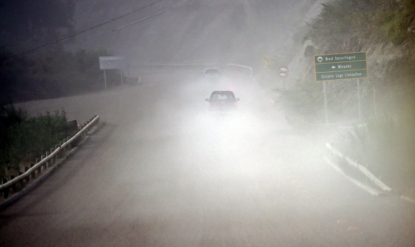 Cars pass amid volcanic ashes from the Calbuco in La Ensenada, on April 23 (AFP / Martin Bernetti)

Then I got another chance. On Wednesday the Chilean government declared a red alert and evacuated the area around the Calbuco volcano, which had just begun erupting after 54 years of inactivity. The volcano is about 900 kilometers south of Santiago. It was 6:00 pm. By 8:00, AFP correspondent Miguel Sanchez and I had hit the road for the 10-hour drive, hoping to arrive before it was all over. As we wound our way south, I called friends in Puerto Varas, at the foot of Calbuco. I got one to take pictures with her cell phone and send them to me. I filed them from the car to our Latin American regional office, using my cell phone. Later I managed to get in touch with a professional photographer who was in the area and buy some higher quality images. So we were covered -- AFP would be able to offer its clients a broad set of gripping photos of the eruption no matter what. But of course I wanted to get there in time to capture it with my own camera. 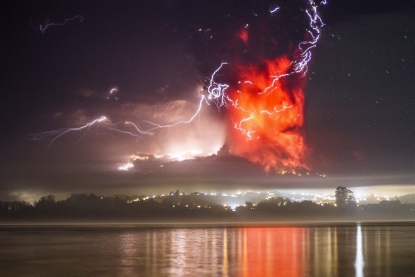 Just before 5:00 in the morning, we decided to stop in Frutillar, a town on the shores of Lake Llanquihue. The sky was clear and this was the first spot where we could see the volcano, about 20 kilometers away across the lake. The panorama would be a little less impressive than in Puerto Varas. But we weren’t going to risk missing the show if the volcano suddenly decided to go back to sleep or the sky clouded over. 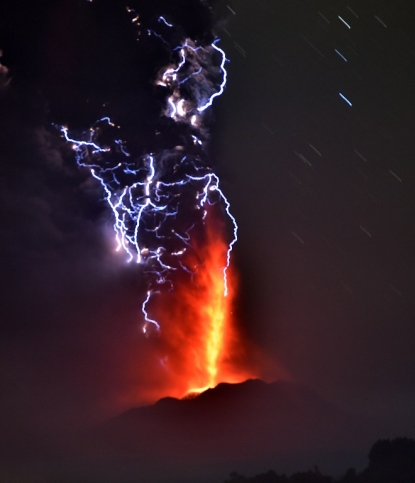 It was a good call. It was still nighttime, it was incredibly cold and the streets were deserted. The curfew that officials had imposed had just lifted. We were completely alone in front of the raging volcano across the lake. You could hear violent explosions, the crater was spitting lava and sometimes a ray of volcanic lightning lit up the darkness, a phenomenon that occurs when molten rock and ash charged with static electricity are ejected into the atmosphere.

I took long-exposure photos, about 30 seconds long. They captured everything that happened in the sky during that interval -- much more impressive than what the naked eye saw from the lakeshore. After two failed attempts this year, I finally had the images I had wanted to capture for so long in my viewfinder.

About 20 minutes later, the eruption was over. We made it in the nick of time. As the saying goes, third time’s the charm.

Martin Bernetti is an AFP photographer based in Santiago, Chile. Visit his website or read the original Spanish version of his post here. 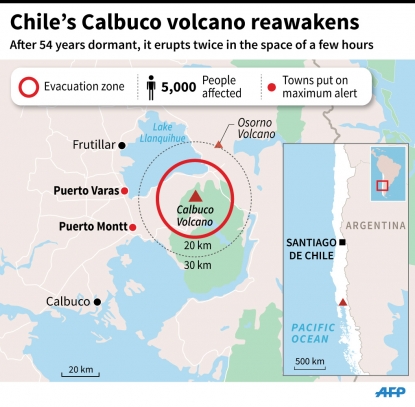 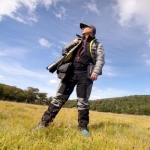 Nigeria’s vote, in my classroom

Backstories: the photographer and the map