A Hezbollah fighter is seen standing at attention in an orange field near the town of Naqura on the Lebanese-Israeli border on April 20, 2017.Lebanon's Hezbollah, which fought a devastating war with the Jewish state in 2006, brought dozens of journalists to the demarcation line between Lebanon and Israel, to show that Israel is building up defences in anticipation of another conflict. / AFP PHOTO / JOSEPH EID (AFP / Joseph Eid)

Along on a Hezbollah tour

Naqura, Lebanon - As our convoy turned onto a orchard-lined lane in Lebanon’s southern village of Naqura, the Hezbollah fighters came into view.

They were hard to miss. Despite wearing military camouflage and smears of green and black paint on their faces, the fighters were clearly there to be seen. The men stood silently in the long grass between citrus trees, holding guns, RPG launchers, and anti-aircraft systems. They didn’t move.

"It's like Madame Tussauds with Hezbollah fighters," said one photographer, snapping frame after frame. 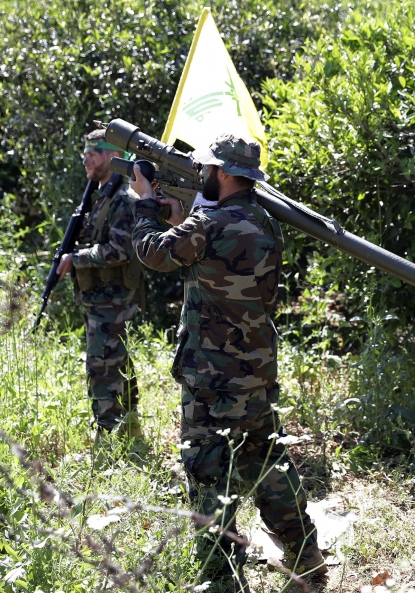 The scene was part of a rare, unusual and highly-choreographed media tour organised by Lebanon’s powerful Shiite Hezbollah group, which doesn’t often offer access to its military wing.

The group is a major force in Lebanon, occupying parliamentary seats but also boasting the country's most robust military arsenal, outstripping that of the nation’s own armed forces. It is designated a "terrorist group" by Washington.

In recent months, a string of statements from Israeli officials has raised the prospect of a new conflict between the group and the Jewish state. The two last fought a war in 2006, a 34-day battle that killed more than 1,200 people in Lebanon, mostly civilians, and some 160 people in Israel, mostly soldiers.

In deciding to bring journalists to the demarcation line with Israel in the south, Hezbollah didn't skimp on the invitations. Journalists take pictures during a media tour with the media office of Lebanon's Shiite Hezbollah movement as they walk along the Lebanese side of the border with Israel on April 20, 2017. (AFP / Joseph Eid)

In the local municipality building in the southern town of Naqura, over 100 journalists crammed into a hall to listen to a pre-tour briefing from Hezbollah spokesman Mohamed Afif.

Among them were journalists from local television stations, major Western newspapers, and a Yemeni reporter from the Al-Masirah channel of the Huthi movement, dressed in traditional attire including a curved dagger tucked into his belt.

Afif told journalists the tour would be a chance to see the way Israel was erecting new defenses, an indication, he said, that it was afraid of Hezbollah's fighters, not the other way around. 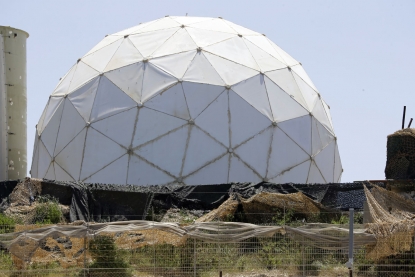 A picture taken on April 20, 2017 from the Lebanese side of the border with Israel shows an Israeli military observation station near the Israeli kibbutz of Hanita. (AFP / Joseph Eid) 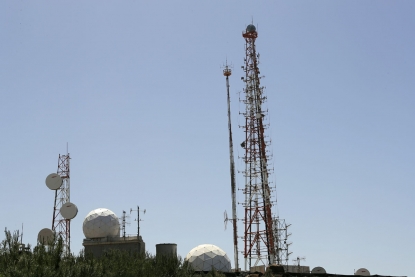 A picture taken on April 20, 2017 from the Lebanese side of the border with Israel shows an Israeli military observation station near the Israeli kibbutz of Hanita. (AFP / Joseph Eid)

He noted that some of the group's "brothers and youth" would be visible on the route to the border, and requested they not be photographed.

But officials proved powerless to stop journalists eager for a rare opportunity to stock their archives with images of armed Hezbollah fighters so close to Israel.

As our convoy of some 20 vehicles passed along the village’s country lanes, locals stood in their doorways, watching us with bemused smiles.

The convoy ground to a halt along a dirt road by the first designated stop along the so-called Blue Line between Israel and Lebanon. 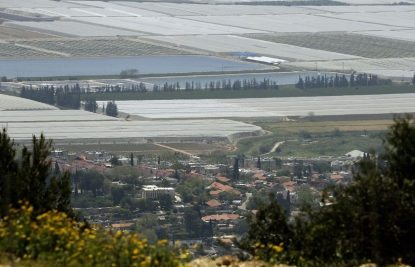 A picture taken from the Lebanese side of the border with Israel on the so-called Blue Line shows the Israeli kibbutz of Shlomi on April 20, 2017. (AFP / Joseph Eid)

It was only then that local television stations with satellite trucks realised they were blocked in by dozens of cars ahead of them.

"Who has the silver Mercedes?" shouted a Hezbollah official accompanying the tour. "We need to move it for the satellite trucks, please!," he added desperately.

But the real chaos began with the appearance of a military commander, identified as "Ihab", who was there to brief journalists on the new defensive measures Hezbollah says Israel is taking. 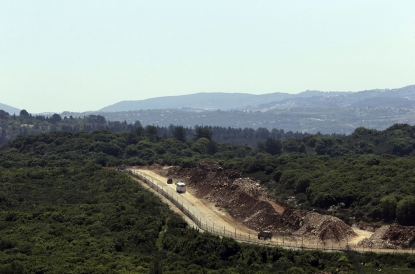 A picture taken from the Lebanese side of the border with Israel on the so-called Blue Line shows Israeli army vehicles driving past newly erected earth berms near the Israeli kibbutz of Hanita and Shlomi on April 20, 2017. (AFP / Joseph Eid)

In a bid to help, one accompanying official began gathering microphones in his arms, eventually admitting defeat and accepting help when the bouquet became too big for him to wrap his arms around.

"Ihab" soldiered through the briefing, saying Israeli forces were now on a defensive footing for the first time, constructing a cliff face to protect their military point and installing new earth berms and spying infrastructure along the Blue Line.

But he was hard to hear over the media scrum, and when the briefing ended tempers frayed. 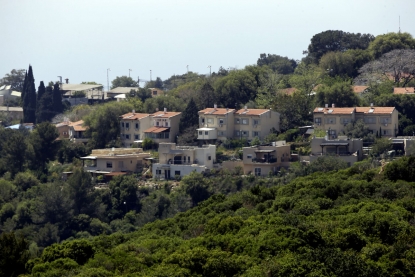 A picture taken from the Lebanese side of the border with Israel on the so-called Blue Line shows the Israeli kibbutz of Hanita on April 20, 2017. (AFP / Joseph Eid)

"The story isn't about him," shouted one Hezbollah official, as journalists complained their images were marred by the chaos.

"I could take him and replace him with any other one, the story is about the defensive measures," he added in frustration.

The issue was resolved with a better-organised do-over of the briefing, and several journalists took the time to take selfies with the Israeli military point behind them.

The tour proceeded to additional stops, including by a base belonging to the UN peacekeeping force UNIFIL, where journalists filmed alongside a sign in English and Arabic prohibiting photos or video. 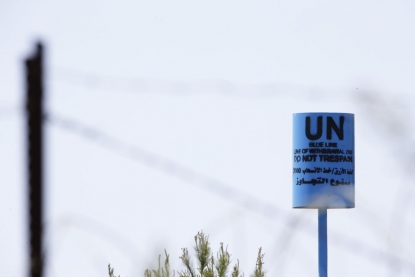 A picture taken from the Lebanese side of the border with Israel shows a blue barrel marking the edge of the so-called Blue Line on April 20, 2017. (AFP / Joseph Eid)

At a stop underneath an Israeli surveillance post, the filming was briefly interrupted by a nervous UN soldier, who bounded towards journalists waving his arms over his blue beret shouting "No filming!"

Lebanese army escorts resolved the issue, but it illustrated the sensitivities on the demarcation line, where skirmishes have occasionally erupted.

In January 2015, a Spanish UN peacekeeper was killed by Israeli fire during a clash with Hezbollah forces on the Blue Line.

The tour's final stop was a peaceful hilltop outlook, just across the fence from an Israeli military position, with soldiers visible in the distance.

As Ihab gave a final briefing, explaining the new fortifications to the position, several journalists set aside their equipment and squatted in the field, gathering bunches of wild thyme to take home with them. 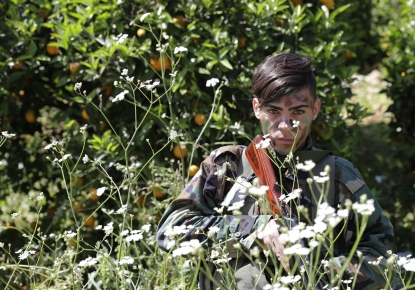 A Hezbollah fighter is seen standing at attention in an orange field near the town of Naqura on the Lebanese-Israeli border on April 20, 2017. (AFP / Joseph Eid) 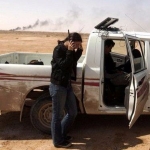 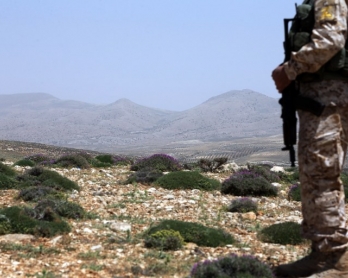