Palestinian students sit in a classroom at a goverment school in the Shejaiya neighbourhood of Gaza City on September 14, 2014, on the first day of the new school year after a three-week delay (AFP Photo / Mahmud Hams)

After war, Gaza goes back to school

GAZA, October 8, 2014 - Pictures of children going back to school in Gaza - I've taken hundreds of them. But those I took this year, I will never forget.

On the children's faces, in place of the joy of being reunited with friends from school, or the enthusiasm of those beginning a new school year, you can often read anxiety and bad memories.

When they get there, they don't know if they will find their school friends alive after Gaza lived through its deadliest war in years, a 50-day conflict which left nearly 2,200 Palestinians dead.

Among them were around 500 children.

Standing inside the playground, the scars of war are everywhere - on the walls, the doors, the windows. And inside the classrooms, other wounds become evident - empty desks where children who didn't make it once sat and studied. 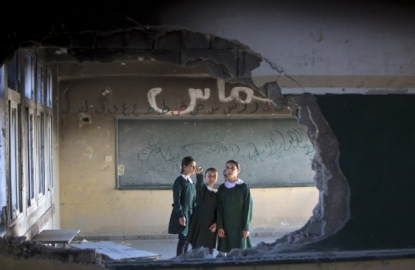 A classroom at a school in the Shejaiya neighbourhood of Gaza City on September 14, 2014 (AFP Photo / Mahmud Hams)

On one desk in the front row is a sign reading: "Najia Jihad al-Hilu, a pupil who was martyred age 14." Class begins with a prayer.

The teacher explains what happened to Najia, and why she won't becoming back to class. She died in a bombing with her father. It is an extremely moving time.

Shejaiya in eastern Gaza City was one of the worst-hit areas and there, everyone has lost someone close or had a family member wounded in the war.

The teacher also talks about what happened there. Like them, she also lost someone. But she tries to reassure them, to give a sense of hope to children who have lived through three wars in the last six years and who dread once again hearing the buzz of Israeli drones overhead.

According to the UN, at least 373,000 of Gaza's children are in need of immediate psychological support following the war.

Their schools bear little resemblance to what they looked like at the end of the summer term. Some walls have completely collapsed. Others are covered in black soot, the residue left behind by an Israeli bombing. 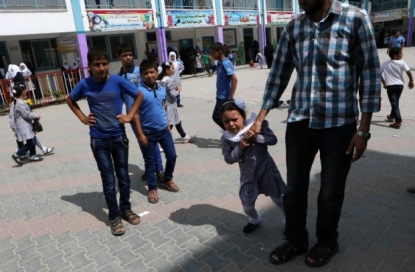 A six-year-old Palestinian girl cries in the playground as she refuses to stay at a United Nations school in Khan Yunis, in the southern Gaza Strip, on September 14, 2014 (AFP Photo / Said Khatib)

At least 24 schools were totally destroyed and another 190 others were damaged in Gaza where 45 percent of the population is younger than 14.

Even before the war, there was a shortage of schools, largely due to Israel's ban on construction materials entering the enclave meaning that damaged facilities cannot be repaired. And with every new confrontation, more schools disappear.

With some 18,000 homes destroyed or severely damaged in the fighting, schools in Gaza were transformed into shelters for the homeless. Around 54,000 displaced people, including many children, are still housed in 18 UN-run schools.

In schools which opened their gates at the start of the new term, the class sizes have doubled so everyone can have the chance to resume their studies. But the lessons themselves will wait a bit. First, they have to try and help the children acclimatise and get past some of the horrors they witnessed over the summer. 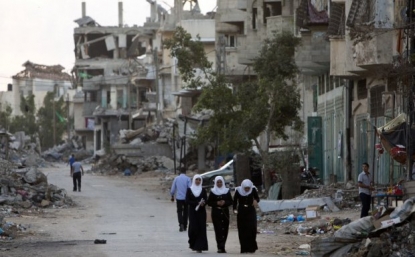 Palestinian girls walk past buildings which were destroyed by Israeli strikes on their way to school in the Shejaiya neighbourhood of Gaza City on September 14, 2014 (AFP Photo / Mahmud Hams)

In Shejaiya, I wait in the playground of a girls' school for the pupils to arrive, and see their shock as they discover it has been badly damaged by Israeli tanks. The playground buzzes with talk as they look at walls pockmarked with bullets, and classrooms open to the wind where a blackboard is the only evidence that children once studied there.

Normally, schools would have started the new term in August. But back then, Israeli war planes were still pounding the Gaza Strip and its 1.8 million inhabitants.

This year, going back to school has left something of a bitter taste in the mouth and one which I personally experienced at 6am one Sunday morning when I went back to school with the children of Shejaiya. 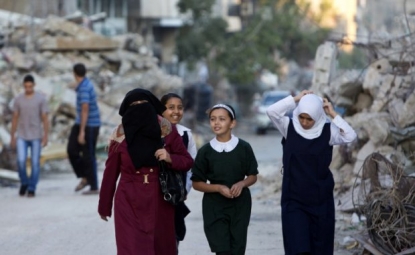 A Palestinian mother and girls walk in the Shejaiya neighbourhood of Gaza City on September 14, 2014 (AFP Photo / Mahmud Hams)

It's a strange obstacle course they must navigate to reach school: climbing over mountains of rubble, passing through the bombed-out houses, walking around craters left by missiles and past the blackened remains of cars, all while taking care not to trip.

Beyond the route to school, which itself packs a visual impact, there is another image which hits me: unlike previous years, many families have not been able to get hold of school uniforms for the new term.

In fact, this is not like other years, if nothing else because this year, the children themselves are different. Their faces are not the same. They are marked by fear and pain. And that will need a lot of work, which will have to continue long after the guns of war fell silent.

Mahmud Hams is an AFP photographer based in Gaza. 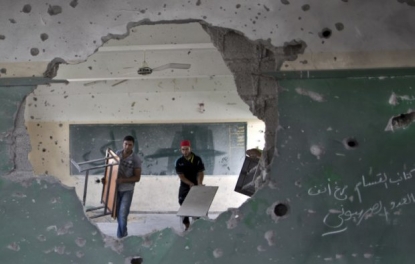 Workers carry tables in a classroom at a goverment school in Gaza City on September 13, 2014 one day before children go back to school (AFP Photo / Mahmud Hams) 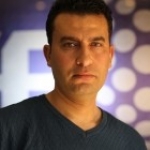