As we climb out of the car, I notice my palms are sweaty. What is this? Isn’t adrenalin. It is terror. I wonder if there is a polite way to ask: "Shouldn't you be knitting?"

Interview and (fully-clothed) photo shoot in the bag, cameraman Antoine Bouthier throws a curveball, asking for a few more close-ups for his video piece.

Director: "Sure. The actress will take a shower now so please come this way!" Awkward silence. Followed by a "Eureka!" moment on my part: "I just write the words - I'll wait outside."

I meet a 39-year-old actress of the "juku-jo" (mature woman) genre called Yuko Shiraki on a photo shoot. She is in a bath robe and slippers. Her changing room is extremely warm and I feel overdressed. But stay focused. She tells me she used to be a truck driver hauling frozen fish.

Next up is Anri Okita, famous in Japan for her "L-cup" bust size. Eye contact would be crucial here.

"It's physiological," she purrs when asked why there are only around 70 male actors servicing some 10,000 females in the industry. "Shimiken is a genius." Understand: regular Japanese guys just don’t measure up.

The genius turns up in a DeLorean sportscar and hands me a phallus-shaped business card. "I'm Sex man!" says Shimiken by way of introduction. I admire his pluck for wearing a T-shirt with "Sex Instructor" scrawled across it. Then again, he has slept with over 8,000 women so who am I to argue?

'Cut!' - for the umpteenth time

We talk for two hours. Most of it completely unusable for a "family" news wire like AFP. But we still have more than enough for our exclusive - and we're getting closer in our quest for the truth. "Guys don't want to be compared to other actors," shrugs the 35-year-old. "And you can get rumbled quickly nowadays with social media. My mum walked in on a scene I was doing once. That was tricky."

The cameraman sighs "Cut!" for the umpteenth time as Shimiken uses another naughty word.

Just when I thought I was done and could go back to covering sport (which was beginning to feel like something I had done in a previous life) I got a call from a company specialising in hardcore S and M movies. "We're shooting a movie on Monday," the voice says. "Please be here at 9 pm."

We enter a dank, dark building and are led up six floors to… a movie set. Surely just to say hello to the director?

An actor in his fifties is sitting in a blue dressing gown puffing on a cigarette. The ceiling is low and the set is crowded. The room smells very bad. In walks the actress in a robe. She drops the robe. "Okay, stay calm and breathe!"

We are 30 seconds away from "Camera, lights, action!" Veteran AFP cameraman Yoshikazu Tsuno snaps away at the director as our video guy sets up, nervously. Various heavy-duty S and M gadgets and equipment are readied. I'm feeling uneasy. And then, in the nick of time, another lightbulb moment.

"I just write the words - I'll wait outside."

Alastair Himmer is an AFP sport and lifestyle correspondent in Tokyo

Adult video actress Anri Okita poses for the DVD package of her new video at a studio in Tokyo on March 26, 2015 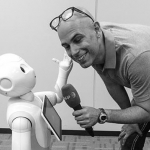 Death in their eyes

Writing on the wall in Bujumbura